A Lot Of Food Talk

Before we really get into the swing of things here, let me discuss a little technical issue I am having at the moment. I would not bother except that it is affecting the quality of my photographs.
When I got this new MacBook, I was thrilled to realize that the photos from my phone magically transferred themselves to the photo app on my laptop. This is awesome. However, sometimes for whatever the hell reason, the photos do NOT magically transfer or transfer in any way. For days. Obviously, I should research this as I am sure there are answers somewhere.
This would not be such a problem except for the fact that when I send the photos via my email from my phone to my MacBook, the quality of them is not at all good. They look like I need cataract surgery which I probably do but that's not the problem here.
But like I said, although I do not know what the problem is, I will try to figure it out. It could just be a matter of my internet connection which seems to be pretty sucky lately.

Meanwhile, you get what you get because I am not able to access my most recent photos from my laptop photos app and that's just the way it is for right now. 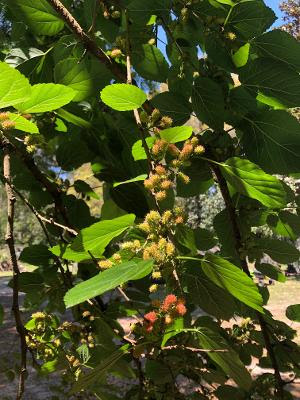 These are the mulberries which are ripening. They'll be ready to eat when they are dark, dark purple at which point they will be warm and soft and so very sweet when plucked from their stems.
I admired them today as I was hanging the clothes on the line. Another perfectly clear blue sky day, good for drying laundry outside. The caterpillars are still raining down from above in vast numbers so I may well have brought in a few but life goes on. I had an easy day of doing what I wanted when I wanted and I enjoyed it. The laundry, the porch plant watering, a few plant pot transplants, etc. And then I went out into the garden and pulled each and every spinach plant because they are bolting and we need the room to plant our field peas. As I pulled the plants, one-by-one, I stripped the good leaves off of them and put them in plastic shopping bags and when I was done, I had two of those bags packed tight and one gallon ziplock. 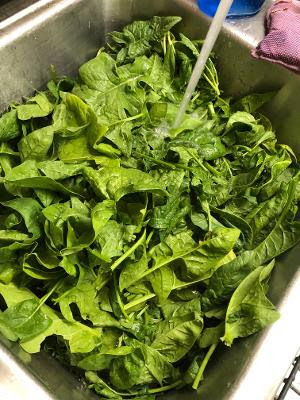 There is definitely a skillet spanakopita in our near future. Maybe two. That has become one of Mr. Moon's favorite dishes.
The beans are coming up like the strong, bold troopers they are. 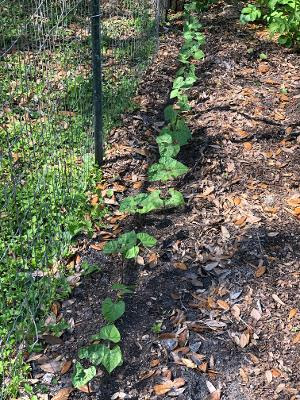 Also- the potatoes are starting to bloom which means that soon the vines will die and it will be time to dig them up. They look absolutely amazing this year. Best ever. I hope that they look as good underground as they do above ground.
The entire garden looks better than it ever has this year and that is all due to the hard work of my husband. Not having to go into the office every day has freed him up to spend time working on and in that space doing everything from chicken-proofing it to hauling in and spreading mushroom compost. And I have to admit that his rows are planted straight and fine, unlike the rows I plant which are, well, wavy. I also have to admit that there's a part of me that has been loathe to give up the control I once had over the garden but honestly- I needed the help. I am good at weeding and of course picking and it is also my joy to use what we grow and pick to cook, prepare, and process if need be. So it works out. And he always asks me my opinion on what he's doing,  every step of the way.
All right. I've made a venison spaghetti sauce which is on low, low simmer and I have yet another loaf of sourdough to go into the oven. I think it is going to be a rather dense loaf. As I say- I am learning.
I've just finished listening to a Fannie Flagg novel, a sequel to Fried Green Tomatoes at the Whistle Stop Cafe. The name of this one is The Wonder Boy of Whistle Stop. Listening to Fannie Flagg read one of her own books is pure enjoyment and this one was no exception. It was nice to spend some more time with the characters that she brought to life in Fried Green Tomatoes. It's simple listening and all ends well (not exactly a spoiler alert- we're talking Fannie Flagg here) and a pretty perfect book to listen to as you're going about your day. It touched my heart that she finally addressed the relationship of Ruth and Idgie in one line in this book. In Fried Green Tomatoes, it was never stated that Ruth and Idgie were life partners, lovers, but it was sweetly obvious. In this new book, Idgie tells her brother, "You know that Ruth and I were more than best friends, right?"
He said he did and that was that.
So. Pineapple casserole. Here is the cookbook that Mr. Moon's dear Aunt Ann gave to me in 1992 that the recipe comes from. 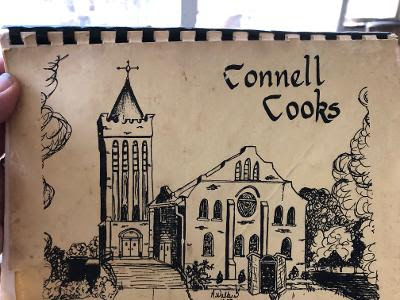 That was Aunt Ann's church. The cookbook is priceless to me. Sometimes I think I should just cook or make everything in it from Hot Fruit Casserole to Broccoli-Onion Deluxe. The recipes come from real, true, Southern women, Tennessee women, women who fed their families every night and who had their own special recipes for company.
Here's the pineapple casserole recipe. 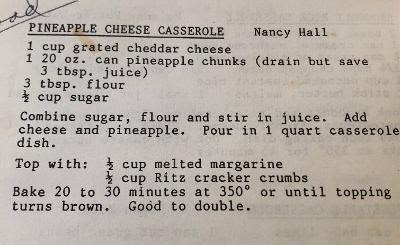 The first time I ever ate this dish was when Mr. Moon's daddy died and we all gathered at Aunt Ann's house in Nashville and people brought so much food that the desserts were laid out on the washer and dryer in the laundry room.
It's a special casserole for special occasions.
And Lord, it's good. Feel free to substitute butter for margarine but don't mess with much more of it. You just can't make it healthy nor should you.
Love...Ms. Moon
Posted by Ms. Moon at 6:48 PM