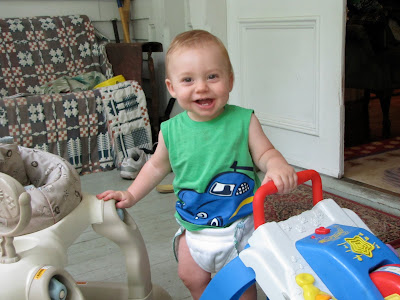 Lawd a mercy! As we say around here. This grandma is tired. But in a good way. I'm about to go make my daily shot of espresso to pour over ice and that will revive me.
Waylon just left with his mama, Mean Aunt Jessie just left with herself which leaves me and Owen all alone. We're happy.
The house looks like a hurricane hit it. Hurricane Hoot'n'Holler. Jessie and I decided that this is what we're going to start calling Waylon and Owen. Waylon is Hoot and Owen is Holler.
They're a good team and can clear out the cabinets in a jumpin' jack flash. That came to mind because Jess and I have been watching one of those Rock and Roll Hall of Fame concerts on and off all day. We've seen everyone from Simon and Garfunkle to Metallica. I don't know how to spell Metallica and I'm too lazy to google it. It's been fun. We also walked down Main Street with the boys, went to the post office, visited the chickens and sang to our little guys. They think that's funny.
Now Owen is playing on the porch with me. He's got a new push toy that my ex-husband and his wife brought over. They've got grandchildren now too and well, this is how our family is. When they're done with toys or books or equipment, they bring it over to us.
I am so grateful for that. They've saved us literally hundreds of dollars in walkers and pack'n-plays and toys and books and a stroller.

And tonight will be fun too. A mini-fest here at Grandmother and Grandfather's house. May and Jessie and Tay-Tay all have to work tonight but they'll be joining us in the morning.
It's going to be grand.
I suppose Owen and I should move to the kitchen so I can make the sauce for tonight's casserole.
After I change his diaper. The boy can pee. And smile. And crawl. And stand by himself although whenever he catches himself doing it he falls down. He'll figure it out. He'll learn to stand on his own two feet. He'll learn to trust his own balance, his own strength.
But for now, he doesn't have to. He has the arms of so many people to hold him.

Happy Friday, ya'll. Have a good weekend. I'll be checking in, I'm sure.