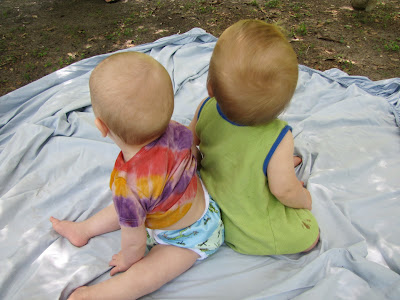 Damn. It's been an exciting day in Lloyd. I mean- TWO BABIES!

And then there was the snake in the hen house. That damn snake. It's the same one. He keeps coming back and he's eating my eggs! I only collected two eggs the other day and I wondered what in hell was going on. Well, it's an egg-eatin' oak snake and that son-of-a-bitch is pissing me off.
Lily and the boys and I were outside feeding the chickens and before we went in we went to get eggs and there he was, draped over the laying boxes like he owned the joint. 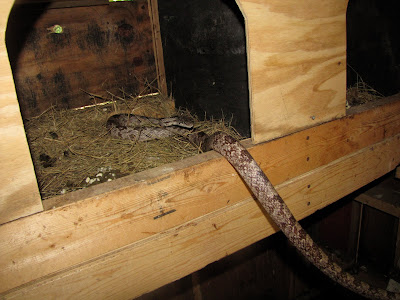 He's a handsome fellow but come on! Eat rats, ya damn bastard and leave my eggs alone!

Lily, for some reason, transformed before my eyes into Zena, Warrior Princess, handed me Owen and grabbed the pitchfork. She opened the little door at the back of the box and pushed him out with the handle of the pitchfork; meanwhile, I stood there not believing she was doing it. She WAS going to grab him with a gloved hand ("I see this all the time on the Discovery Channel- I can do it!") but when glove came to snake, she opted not to. 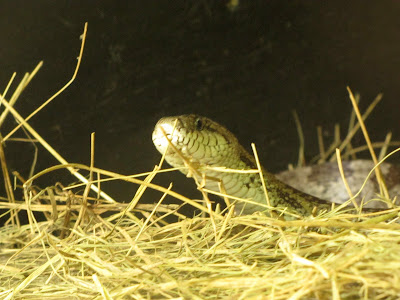 I was stunned that she did what she did but I shouldn't have been. Lily is a force of nature.

After the snake dropped out of the box Lily coaxed him into heading back into the woods. He'll be back, dammit. I know he will. Either Mr. Moon is going to have to get him in some sort of container and carry him to a distant place or else he's going to have to kill him and I don't really want him to do that. Snakes like that one are not a threat to humans and are lovely in their snake way.
But he cannot keep stealing my eggs. No way.
As Lily once said here when a bat was flying around the bathroom as she was trying to get ready to go to work at 5 a.m., "Too much nature!"
Sometimes it feels that way, anyway.

The yellow flies are driving me insane. 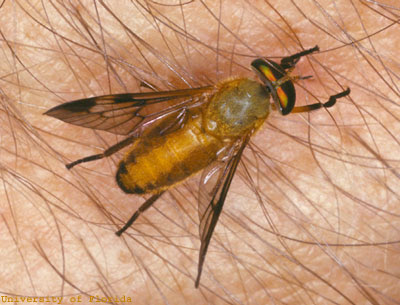 I did not take that picture and I won't be posting a picture I personally took because I'm not letting one of those motherfuckers stay on me long enough to focus. They bite and take blood like a mosquito but their stings swell and itch enough to drive me insane (short drive, Mr. Moon would say) and one is torturing me this very instant. She already bit me twice. Again, like mosquitoes, only the females bite.
Frankly, I'd rather have a snake near me than a yellow fly. I'm not even kidding you.

Anyway, we had a great time with the boys. Owen and Waylon seem to be amused by each other and try to grab at each other's faces. They go straight for the eyes. I have no idea why. Waylon is a happy boy, like Owen and fairly easily amused. He went down for a nap around three and when his mama got here at four, she found us asleep together in the guest room.

We were both tired, even though I hadn't done a damn thing all day long.
Like I said, we did go out and feed the chickens. Here's a picture of Miss Penny who was getting real close and personal with me. She WANTS those grapes and she is not kidding! 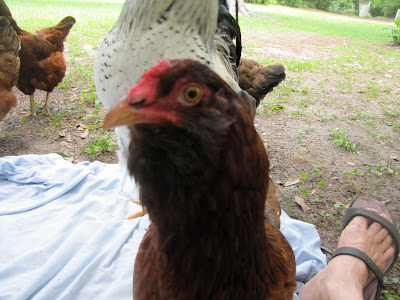 She was IN MY FACE! So I took her picture.

And here's a picture of Jessie with both boys. 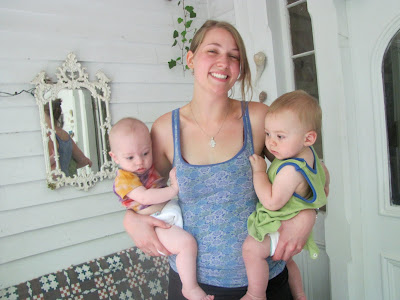 You can see that Owen is keeping an eye on Waylon. "That's MY Mean Aunt Jessie," he is probably thinking. He's almost all well now except for a bit of huskiness to his voice which is actually quite charming. He's sort of the Demi Moore of babies now. He's back to being the boss of every one, especially his grandmother. He took a dive backwards off the bed today but I miraculously stuck out a foot and gently broke his fall. He was pissed off but not hurt.

And now I suppose I better do a chore or two. Like- wash the breakfast dishes. I mean, it's time to start thinking about dinner.

It's been a good day. I tell you. When Jessie came in she found Lily and me, sitting in the Glen Den eating meatloaf sandwiches and watching Wife Swap and playing with the babies. I mean really- it doesn't get much better than that. And then- a nap with a baby?! Well. Nothing better.

A hot summer day with babies and snakes and meat loaf sandwiches and some of my kids and now it even looks like it might rain.

I better go wash those dishes.