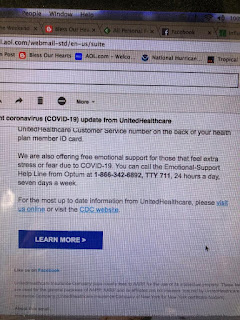 Woke up this morning with Country Joe and the Fish's "Fixin' To Die Rag" in my head (Whoopie! We're all gonna die!) and then I got the email above and thought seriously about calling the number but I figured that what they were going to say would basically be CALM THE FUCK DOWN! but in a slightly more therapeutic way and I didn't. But I'm not deleting the email. One never knows.

I ended up going to town, risking life and limb for some cheese and vodka at Costco. And nuts. And lemons. Seems like everyone is being extra nice around here. Maybe it's because I'm in the elderly category which makes me, in some people's estimation I'm sure, a walking dead woman. Almost everyone is nice to the dying. Although I must say that no one offered to let me ahead in line which would have been the polite thing considering I have so much less time to live.
I also went to Publix because I wanted a corned beef and a cabbage. And then to the Coop because I need nutritional yeast to put on popcorn. And to Best Buy because my Gee Dee headphones aren't working and I really do not want to talk about this because I'm a very idiotic consumer, continuing to buy the same brand time after time, despite the fact that they all crap out after a ridiculously short amount of time.
And I was completely aware with every step I took during the day and every breath I took during the day and every thing I touched during the day that yes, that could be the second that led to illness. I did avail myself of hand sanitizer every time I saw some, knowing all the while that although it's better than nothing, it's not as good as washing my hands.
Oh god. I'm being so dramatic.
See- here's the thing. One minute I'm feeling like I'm in a movie about the death of the human race except for a few brave and beautiful scientists who all have perfect abs and the next minute I've forgotten we really are in a very scary and strange situation.
The birds are singing, the trees are budding, the red clover is bursting its scarlet glory all up and down the roads, the grocery store may be out of bleach and hand soap but there are plenty of vegetables and bread and meat. Gas stations are open. The regular problems and issues of life are still with us. 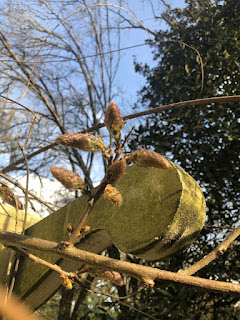 And then I listen to the news and I'm back in panic mode.

I heard a bit of Trump's speech today and it sounds as if someone has at least come up with a shred of a plan and soon we'll be able to do a drive-through at Walmart to find out if we're on the possible death list. It wasn't exactly a reassuring speech but it was better than the last one he did which had two lies for every truth in it.

As we were falling asleep last night I asked Mr. Moon if he thought that we could raise some peeps out in the coop in the little nursery coop if we piled enough straw in it. We pondered that for awhile. I'm still pondering it. I don't think that it's any coincidence that I'm wanting more chickens and that Mr. Moon is suddenly really into the garden. Feels like a good time to be a little more self-sufficient. And I did buy two bags of flour today. One whole wheat, one white.

I talked to Lis today and we agreed that things are going to look very different in just ten days. Not unlike the way that ten days ago we could not have imagined being where we are today.

I hope that we'll still be able to laugh, Lis and I, giggling like Betty and Wilma as the dinosaurs and giant mosquitoes try to get in our windows.

Meanwhile, we are doing the best we can. Trying to figure it all out with not nearly enough information to go on.

Happy Friday, y'all. I recommend a martini. Or two.