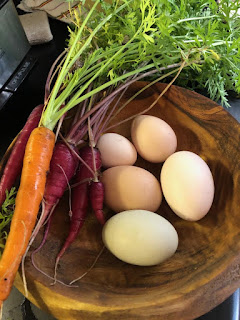 That's my tiny harvest for today. I only picked as many carrots as I want for supper and I'm quite proud of my egg total in that I only have five hens. I'm confused though because I've been thinking that the egg on the top right is little Miss Violet's but then along came the even smaller one to the left of that one which is surely the bantam egg.
Whatever, I love my hens. And Liberace too, if I am honest. I can't help but admire a dedicated rooster and he is certainly that.

I'm not sure if I've mentioned this but Jessie is going to go back to work for a few shifts a week. For those of you who do not know, she is an RN and has worked primarily in the postpartum area of several different hospitals and she has gotten a job doing that work at one of the hospitals here in town. This was a big decision for her to make as she's been a devoted stay-at-home mama since August was born. She and Vergil decided though, that it would be a good thing for all concerned. She'll get out of the house doing something that she loves and that she gets paid for. There may be no job as satisfying (mostly) as being a mother but the pay is for shit. I think it's a great idea and wish that I had kept my toe in the waters of nursing as well but I didn't and those waters have definitely been washed under the bridge long ago. Nursing is something that is constantly changing in some ways and if you don't keep up, it can be almost impossible to go back and retrain without a great deal of effort. Women's bodies after they give birth don't really change that much but the technological side of the job, which has become more and more important, does. And as with any skill- use it or lose it.
So I think it's great that she's made this move.
Today she needed to go in for a just a few hours to get some paperwork done and I'm not sure what all but I went over and stayed with the boys while she was gone which was fun. They are jolly fellows, for the most part, for their old Mer. Of course we read books including part of a giant tome on vehicles and heavy machinery. Levon seems to have become quite interested in combine harvesters and so those were discussed at length. His obsession with all things wheeled and tracked continues. Jessie sent me this picture the other day. 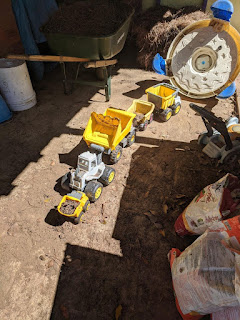 I personally think that this shows a nod towards management as well as heavy-equipment operation. I mean, those are some nice organizational skills being displayed there.

I made the boys some peanut and jelly sandwiches and got these shots. 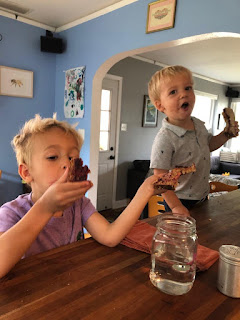 Not the best picture but I love how it shows Levon striking a typical Levon pose. He has a sort of gravely voice like Gibson's and he makes proclamations quite frequently with that voice and they never fail to impress me. 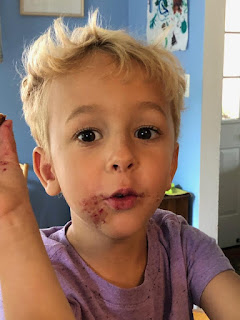 August has taken to separating the two pieces of the sandwich in order to lick the jelly off first. This results in something that if I were a grandmother bear, I would probably deal with by licking but since I am a grandmother human, I just get a washcloth. Doesn't he have beautiful eyes?

All was well with not a tear or a fuss until Mama got home at which point August demanded gum from me and I said that yes, he could have a piece but that first I wanted to go get a diaper from his room which I'd forgotten to trash after I changed Levon and so he grabbed my purse and started to root around in it which I asked him not to and then his mother TOLD him not to and when he proceeded to do it anyway, she calmly said, "Well, no Mer gum today." This induced the the loudest wail from August that I've ever heard and which even caused his father to come up from the basement where he works most days to see what was going on.
"It's Jessie's fault," I told him.
Strictly speaking it was August's fault, of course, but I wasn't taking any credit.
I felt terrible, having to leave while he was so unhappy but what can you do? I promised him a piece of gum the next time I see him which did not comfort him.
I think he was tired.
And he wanted gum.

Levon wasn't troubled in the least and gave me a little hug. He'd given me a spontaneous hug earlier, right out of the blue, which was a first and I felt honored. August had leaned against me a few times while we were reading which for him is a huge show of affection. So there was that sweetness. It is hard but I try to restrain myself from hugging and kissing as much as I want because these two boys are not as tolerant of such foolish behavior as their cousins are so when they initiate affection, I melt. When I am long gone, I do not want them to remember me as some sloppy old woman who pinched their cheeks and gave them unwanted kisses but rather as someone whom they knew loved them and respected their own personal boundaries. I am having to remember that now Owen is not a tiny boy who tolerates my cuddles and hugs as freely as he used to. Sometimes I just go sit by him, hoping that he realizes that I still long to be close to him but don't want to make him uncomfortable. Gibson is still the world's most enthusiastic hugger and Magnolia will definitely let me know when and if she wants hugs and kisses.
They are all so different.

And so another day lived. Everything normal as can be except for this constant strange threat looming over us. Jessie texted this morning that she had made the mistake of looking at FB first thing this morning and that now she didn't know whether to hide for the next year or just go ahead and get the coronavirus and try to get over it. I responded, "I'm swinging from complete fear and anxiety to grim acceptance."
And this is true.
I don't think we'll truly know the results and effects of this pandemic until we've lived through it.
Or not, as the case may be.
The health concerns are bad enough but throw in what are surely going to be huge economic difficulties and, well, it's not going to be pretty. And I'm not talking about the stock market although there is that too. I think we would all feel a bit less panicked if someone trusted was in charge but that's just not the way it is.

Meanwhile, let's live our lives in a thoughtful and careful manner.
Whatever that means.
I may go early-vote tomorrow.