This morning's dream involved a nice visit with Madonna and Roseanne Barr at my home. Or, you know- one of my dream home versions. And before you jump on me- Roseanne was as polite as could be and so was Madonna, if you want to know the truth. I liked that I could pick things from the garden to make Madge salads because she eats all healthy and shit. An interesting thing was that I was trying desperately to call someone, I can't remember who, and I had several devices to choose from to make the call from but I could NOT figure it out. It occurred to me in the dream that perhaps I was indeed dreaming because I know that when I can't make a phone call, it does mean that yes, this is a dream.
"I wish," I thought in my dream and continued to fumble and stumble over my devices, not even being able to find the phone number I wanted to call.
And being thus occupied with dreams, I managed to sleep until after 9:30 and only woke up then because the land line was ringing.
It was Jessie. She and Mr. Moon arranged a biking adventure and soon he was out the door and on his way to the bike trail leaving me to get things done which is a huge joke because time has slipped its gears and again, I did not get the bed made until after one.
I did finally finish my dress and it's in the washer to hopefully soften up and it's not much in the way of dresses but as I told Mr. Moon, it's something different to wear. And it DOES have pockets so there is that.
So it's just been another very slow and yet lightening-fast day of not much. Oh! I made some pesto with spent arugula. 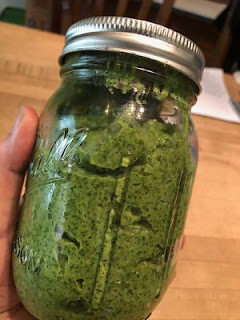 I will admit that I do not like pesto made with arugula as much as I like it when it's made with basil but needs must, right? Also, I got it too salty and so with Sharpie I wrote on the lid, "No added salt needed."
Still, a jar of green goodness to go on pasta is a nice thing to have and the arugula is not going to waste as it bolts.

Chickens are all good. Baby chicks got clean everything today. They are growing as are the teens. We've had them one week. 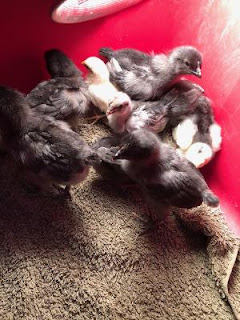 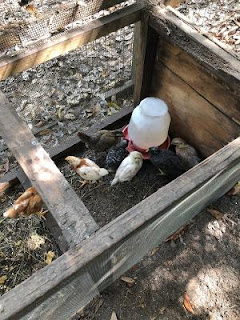 I need to spend more time holding and taming them. I used to do this but the last few years I have not spent as much one-on-one time holding them, talking to them, giving them treats by hand. Hell, I can't even tell many of them apart, especially the babies. Maggie proclaimed that "the black one" of the bigger chicks should be named "Coo-cow" and I have no idea how to figure out which one she means.
I'm just impressed that I remember the name "Coo-cow." I doubt she does.

Mr. Moon and I compared notes this evening and we have both quit having heartburn and we both appear to be losing some weight despite things like this: 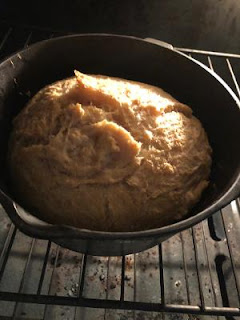 Another gorgeous loaf of sourdough.
We are neither snacking mindlessly (no time!) or eating in restaurants and although our meals have been very good (even last night's soup turned out well) they are also very healthy and are being made with definite thought and care.

We played some more cards this evening. It went as usual. 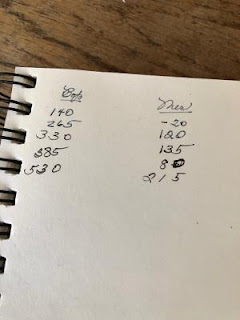 I have deemed this the Great Coronavirus Tournament and we shall keep playing until...well- who knows? Not me.
I don't know shit. Except for the fact that Mr. Moon is lucky in cards as I am lucky in love.

Here's a picture from the end of the bike ride. 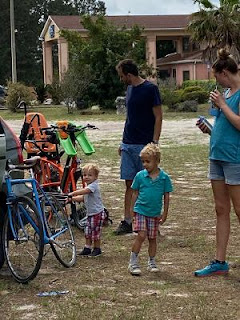 Mr. Moon reports that a very good time was had by all and proper distance was strictly kept.

And that's the report from Lloyd today. We're about to go out and take a little garden tour and I will pick our salad. That luxury won't be lasting forever but if all goes well we shall have tomatoes and peas and beans soon enough. The bread is out of the oven. The kitchen smells heavenly. There is a bucket of chirping crickets which Mr. Moon bought for bait in the kitchen by the door and so not only does it smell good in there, it sounds like the background tract from a night scene in perhaps "The Yearling". We feed them oatmeal and give them paper towels soaked in water to keep them alive and it's pretty interesting.

I hope with all of my heart that all is well with you. That if you had a hard day, tomorrow will be better. That if you had a good day, the memory will tide you over until another one shows up. That you have enough of everything that you need.