From Costco To Paste Butt 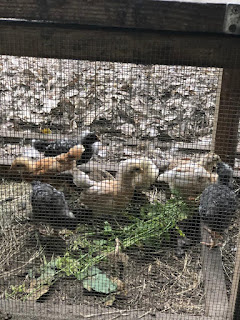 I think that one of the reasons I was in a blue, flat mood yesterday was because I knew I had to go to town today. Really, I'd just as soon not leave Lloyd at all and the idea of being around people, possibly infected people, filled me with dread. But on the other hand, I needed to pick up that prescription and if I was going to be in town, why not get everything I could to make it possible to stay home for at least another two weeks? Let's face- the infection rate at this point is less than it's going to be in the coming days.
So.
Weighing the risks I decided to just go ahead and be as careful as possible and that's what I did.
I waited until the senior hours were over and done and by the time I got to Publix there were very few people there and the shelves were mostly full. The only thing I couldn't find was pinto beans but I got a bag of black beans and a bag of garbanzos and that will do.
Some people seemed to be very aware of the six-foot rule and some people not at all.
Specifically the pleasant woman behind me in line. She came right up to me as I was paying, fumbling my card trying to think of how I was going to disinfect it before I put it in my wallet and I just did not have the heart to say, "Back up!"
Next to Costco where they have it going on. There weren't too many people there and again, shelves seemed full. Some people shopped with masks on, some with gloves, some with both. I got what I needed and when I went to get in line I noticed that there were yellow taped lines on the floor which carts had to wait on until the customer checking out had finished. There was a plastic screen between the cashier and the customer and a woman was wiping the belt after each customer. No one was supposed to touch the customer's bags. And when it came time to check our receipts on the way out, we had to merely hold them up and the attendant would give them a cursory look and nod, and we were on our way.
On to the pharmacy where I get my hormones and the lady behind the counter there was wearing a mask and she wiped down the card scanner before I put my card in.

I was so close to Jessie's that I had texted to see if maybe I could drop by and see them from afar and she said of course, and so I did. I'd picked her up some avocados and a bottle of Jack Daniels at the Costco and I handed them over and the boys greeted me with their beautiful mother. 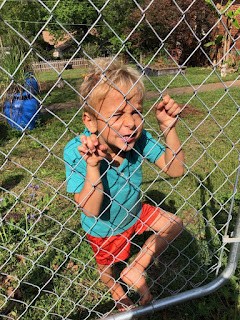 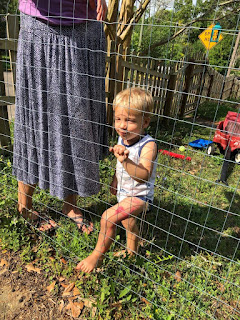 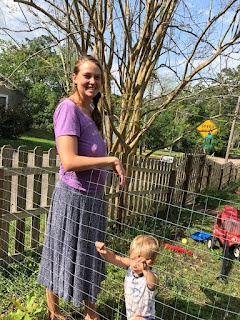 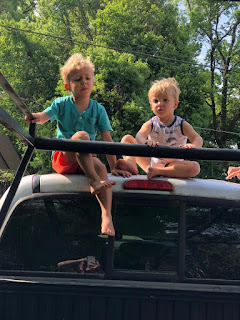 It made me cry a little, not to be able to hug the boys but seeing them and talking to them was better than nothing. Of course they wanted some of my Mentos and I just handed the roll over to Mama. They were so happy.
And then I came home and tried to figure out how to disinfect the cans and boxes as I put them away and I'm sure I did a half-assed job and then I took a shower and finally ate. I'd been too anxious that morning to do more than grab an English muffin which I only had a few bites of.

I did some chicken-tending, taking the teen chicks some pulled up spent greens and refilling their water and feed. I did a little research on a chick problem called "paste butt" which I had decided the two banty yellow chicks had. It's a situation where their little vents get pasted over quite literally with poop and so I did what the internet said and ran warm water over their little down butts and then carefully and delicately cleared the vents by getting rid of the poop, dried them off, put a tiny bit of antibiotic ointment on them and set them back into the Rubbermaid bin. I also added some apple cider vinegar to their water which is supposed to help. They seem to have tolerated the procedure well and they do appear to be a little more sparky.
Did some laundry. Cleaned up the kitchen. Made the bed. Looked at FB and read blogs. And then I took a nap.

And now it's time to make supper! Where in hell does the time go?

All day the family has been group texting which has been so fun.
Lily started out with this picture. 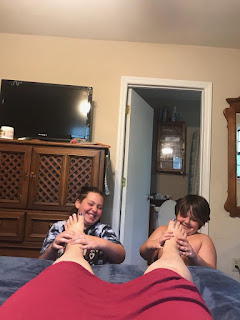 This was the accompanying text: "Today we are having massage class. This is the final exam." 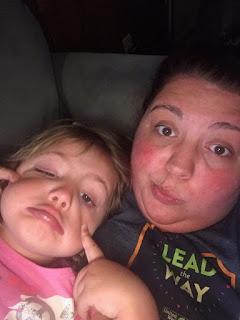 May sent this picture along. 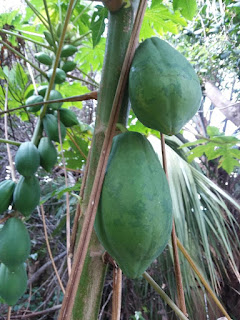 She's discovered papayas, growing in her yard! Isn't that exciting? I think so.

Hank and Rachel have been sending pictures of their cats. Like this one. 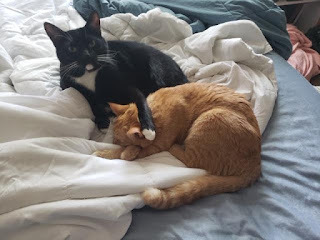 It's all love and peace at their house.

I've barely looked at the news today but I did hear an epidemiologist on NPR saying that the way Trump handled/didn't handle the virus from the beginning has cost the US a month in trying to deal with the situation.
Four weeks.
And how many will die because of that?
It would be so easy to become enraged at him.
So easy.
The hard thing is to try and just handle things the way they are. We can't go back and undo what is done.

So. Again. Tomorrow is another day. I hope to settle back into a routine and perhaps try to be a little more productive. To clear my head and get my exercise in and take care of that which is right in front of me, literally in all ways.
I have so much to be grateful for.

Take care, take care. This won't last forever. Let's all hold hands across the many miles in this virtual way which cannot hurt us but which will still give us strength and hope.