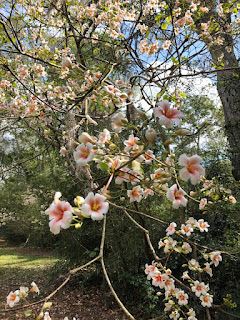 This morning I did what I suppose is panic-buying and went to Publix. At least I got up early and got in there before nine which just goes to show you how somehow important it all seemed to me. I knew we had plenty to eat but I needed the comfort of knowing that we have more than plenty which is absolutely the wrong way to think about things and I know it.
I mean, whipped butter WAS involved.
So silly.
Lily had asked me to get her some toilet paper if they had any and every person I saw had some in their basket and I knew I should have done what they'd all done which was to go raid the paper aisle first. By the time I got there the shelves were empty but for three four-packs and I got Lily two of them. I got juice and asparagus and potatoes and strawberries and another bag of flour and a can of baked beans and beer and milk, both for us and for Lily, apples, bananas, avocados, coffee, and dark chocolate peanut covered M&M's.
Which I swear are for Mr. Moon.
The bread aisle was empty but for gluten-free and raisin bread. There were chips galore. So of course I bought a bag. Don't even ask me why.
I got whipped butter and chocolate chips (for emergency baking) and probably the most random thing of all because I got neither tortillas or taco shells- two packages of Old El Paso taco seasoning.
Venison Noodle Mexicana, anyone?
I did find bleach and I bought some. Also, laundry detergent because you know DAMN WELL I can't go three days without doing laundry.

Mr. Moon spent the morning vacuuming the house and then spraying for fleas so while the spray was drying I took a walk and when I got back I told my husband that it would be nice if he hung the hammock up. "Good idea!" he said, and he did it and told me it was ready.
"I wanted you to lay down," I told him. "You've been working hard."
He kept telling me to enjoy it and I kept insisting that I was perfectly happy where I was, which was true. I was sitting under the magnolia, reading Keith Richard's Life for about the fourth time. Finally my sweetheart did arrange his long, long body in the hammock that we bought in Cozumel and for a little while, it was so beautifully peaceful. 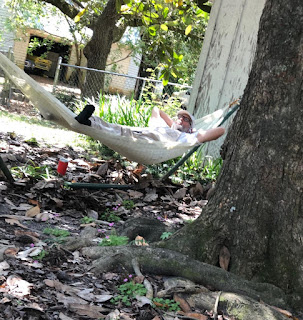 Jack came out and rubbed my foot with his head and I responded by rubbing his head with my foot and the chickens came and went and talked about things as chickens will do.
I've been thinking lately that it was probably about time to reread Keith's memoir. It's been years since I either read it with my eyes or listened to it and if there's anyone in the world who embodies survival, it's Keith Richards. 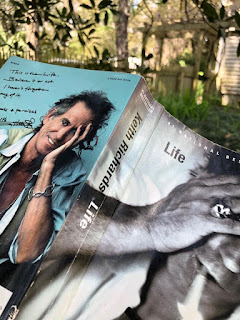 When I opened it up last night I was surprised at how fast I got back into it. How charmed I was. I remembered why I love that book so much- it's a damn good book. How many times have you read an autobiography or a memoir and gotten through the parts about the grandfathers and grandmothers with eyes rolling back in your head with boredom? Either Keith's forebearers were far more interesting than most grandparents or else he's simply a great story-teller or both. Even those parts spark with life and the man who put the first guitar into Keith's hands, his grandfather Gus Dupree, was so obviously beloved by the little boy Keith that you can't help but fall in love with the old reprobate. The way he talks about being bullied as a child, how his mother and father both came from matriarchies, what England was like just after the war, how he came to love music and sang for the queen before his voice broke, how he first began to question authority and the entire system- it's all told so honestly and yet sweetly that I've fallen right back into the story of it.
Better than chocolate for me.

So we had that time in the yard and the weather is warm, warm enough to make you sweat if you walk or work, but breezy and not yet so humid that it's like trying to breathe underwater. The Tung trees are blooming all up and down the interstate here and in my yard as well. That's what you see in the top picture. And in this one. 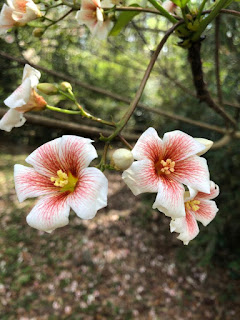 I'm not sure there are even names for those colors.

I passed a fat bumble bee making love to an azalea on my walk. 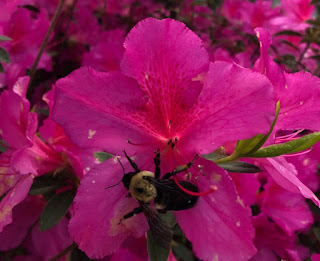 Tomorrow August and Levon are coming over for the day. They stayed at Lily's house today and from the pictures I got, it would appear that they had a wonderful time. I came in and said hello to them when I dropped off the milk and toilet paper at Lily's and they both looked at me as if I had suddenly appeared from a very different planet. What in the world was Mer doing at Lily's house?

I'd keep track of the days' numbers that we're all spending on what indeed feels like this very different planet but I have a feeling that there are going to be quite a few of them.
Best to just take them as they come and try not to count them.

Be well and be safe and do like Keith, by which I mean- survive.