Maurice seems to have mellowed some in the last few weeks. She has not tried to remove a hand from a wrist lately. We consider this to be major progress. She loves to sit on Mr. Moon's lap when he's in his chair and he likes her to be there except for the fact that every time he moves she growls. Last night I went into the Glen Den to see what was going on there (Baby Bheem on the TV) only to find that Maurice was sitting with both Boppy and August which is very unusual. Her usual reaction to a child in the house is to run like hell. And of course, they know to give her distance. Maggie doesn't call her "Scratch" for no reason.
But there she was, snoozing away with the man and the boy and I had to take a picture.

We had such a good time with August. Mostly I just like to talk to him. He makes the most astute observations and wants to know why things are the way they are. Sometimes, we adults don't even know why we do the things we do. Why does Boppy sleep on that side of the bed and Mer sleep on this side?
That question alone had me trying to remember which side of the bed I have slept on in every house we've ever lived in. Also on vacations. Is there a reason that we choose the sides we choose or is that just how things have worked out? I have no idea.
I really enjoy these talks. His perspective on things is interesting to me. Children can challenge assumptions and rituals and habits that we grown-ups have long since stopped even wondering about. It's a beautiful and refreshing thing to see our lives and how we live them through the eyes of a very young person who has yet to learn that we do things a certain way just because THAT'S HOW WE DO THEM!
"Why?" they ask us. And if we are honest we have to admit that we really don't know.

He was so tired last night that he didn't have the energy to talk too much and he fell asleep very quickly and slept all through the night until the clock said 8:24 which of course was really 7:24 but what the hell? I said, "Come get in bed with us," and he did, even snuggling. I was in heaven.
"Here," I said. "I will move over and let you have the warm place where I've been sleeping."
"My mommy is warm too," he said. "She is warmer than you. She is as warm as fire."
"Oh really?" I asked him.
"Yes. But my daddy is cold. He is as cold as winter."
August is quite the poet, I think.
So we cuddled for a few minutes and then Boppy got up and said, "Come on, boy. Let's let Mer sleep a little more."
And they went off to watch TV and I did indeed sleep a little more and then got up and made the pancakes. 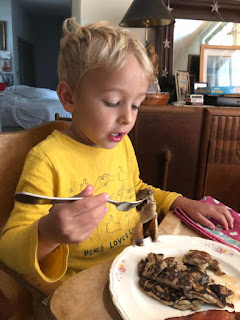 He ate three.
It's so funny how both he and Maggie still love the high chair.

After breakfast he and I read some books while Boppy cleaned the kitchen and then Lon and Lis came by on their way home from a visit with Lon's sister and her husband who live a few miles down the road. It was so sweet to see them, but so sad that it was such a short visit. We walked around outside in the beautiful day and August did some digging and Lon and Mr. Moon discussed the garden and gardening in general and tires and other manly things. Lis and I talked about jewelry and cooking and the coronavirus. We are both baffled as to what to do. What we should do. What not to do. What seems ridiculous. What does it mean that Italy has put over a million people in shut-down? What is that? Can they go to the store?
Damn, but I think that we should know more about all of this than we do.
We both did agree, however, that there will be no cruises in our immediate future.
Haha!
As if that had even been in consideration. We are not the cruising sort of people.

After they left, August helped me pick some carrots. 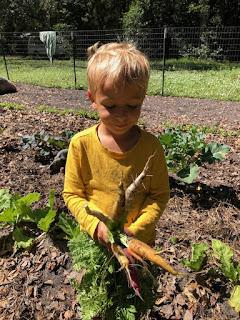 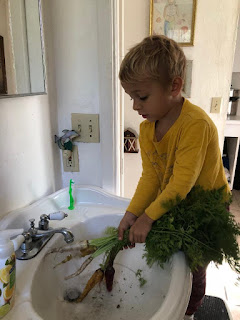 And then he washed them in the bathroom sink. 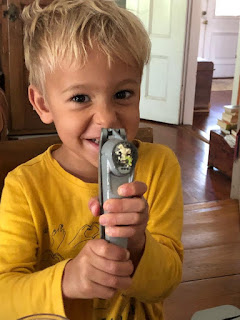 So he did. He's pretty good at that. Boppy told him to try a little bit to see how it tasted.
He put a few molecules in his mouth and said, "Too zangy."
What a great word!

He and Bop checked eggs. 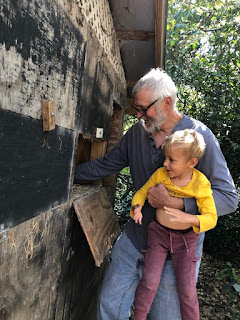 And then it was time for him to go home. Boppy needed to go to town to get a few things and so he took the boy. He was cheerful and not unhappy to leave although he had asked me earlier if he could stay another night.
"Soon," I told him. He's a great visitor.
Earlier, when he and Lis and I were talking I told him that I wished he could live next door to me and he said that he thought that I should live in his yard.
"Would you make me a house?" I asked.
"Yes," he said. Turns out though, that it would only be a bedroom. I would have to come into his house to eat and go to the bathroom.
"Okay," I said. "If you build me a house, I will come live there."
"I'll talk to my daddy," he said.
"Tell me how this turns out," said Lis. "I'll help with wallpaper if you need it.
And she would.

Mr. Moon is putting in some tomatoes right now. "I can garden until eight!" he said.
I guess that daylight savings time is good for farmers. And gardeners.
It's really way too early to put tomatoes in by the calendar but I doubt they'll freeze. Supposed to be up in the eighties this week.
Sneeze and you'll miss winter around here lately. We're going to have to throw the old almanacs out and figure out new ways.

I better go make supper. It may feel like it's six o'clock but no, it's after seven.
Thank god for clocks, otherwise I'd be so confused. Like the chickens who don't even have clocks and so have no idea they're roosting an hour late.
Silly chickens.