I Have Nothing To Complain About 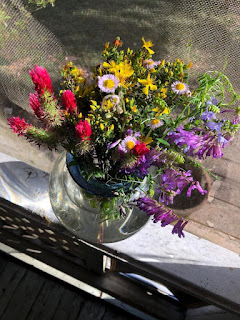 Another little wildflower bouquet that I picked on a walk today. A few other folks were walking as well. Two women, a kid on a bike, a kid on some sort of motorized skateboard, a kid in a stroller, and a little girl about Maggie's age who was also on a bike but with training wheels. I smiled at her and said "Hey" as I passed on the other side of the road. She looked at me with the biggest scowl on her face and I swear- she was Magnolia June's African American twin. She was not happy in the least but she was going to pedal that bike or die trying! I loved her. 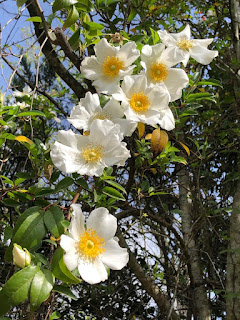 This is a Cherokee rose which, like the wisteria, is beautiful and invasive as hell. But it cheered me considerably.

Mr. Moon took another long bike ride. I am truly impressed. He stopped at the post office where he found seeds that he ordered, including rattlesnake beans which are my favorite. The place we got ours in years past has finally, after about sixty years of operation in Tallahassee, had to close. He's out in the garden right now, getting dirt ready to plant zinnias and other flowers, the beans and some cucumbers and something called strawberry spinach. He is beginning to settle in to this whole thing. I'm proud of him for that, too. He told me earlier today that sleeping eight hours at night is pretty great. It's so odd how there's so much about this situation that is truly sweet, even as I know that people all over the world are getting sick and even dying which of course makes me feel very guilty. I find myself less anxious than usual, simply because I have something tangible to worry about. This makes no sense, I know, but that's the way it is right now for me. Also, as I keep saying, this is all probably about 99% due to denial but hey! It's working. For now.
I've slipped into this role of being a good and prudent housewife. I pulled a row of bolted arugula today and sat down and took off every leaf that still looked good, washed them, put them in the refrigerator either for salad or to cook or to make pesto with. For lunch I made us a delicious frittata-like thing with two small potatoes, four small eggs, and a nice bunch of chard, kale, collards, and mustards, sauteed with garlic and the last piece of a red onion. It was delicious and will end up being two lunches for the both of us. I am being far more aware of the amounts I am cooking and I am using what I have as creatively as possible.
I chopped up some of the buggy chard and a little kale and collards for the chicks. The older ones absolutely destroyed the greens and the little ones picked at them politely.
Here's the only chick I have named. 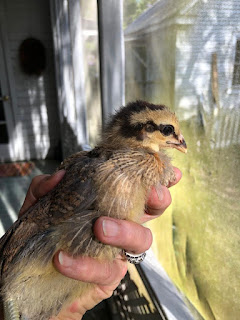 I have named her Cleopatra. Can you see why? 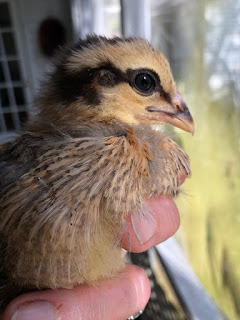 Look at that eyeliner! She's one of the big chicks. They're going outside tomorrow. They are ready to spend their days and nights in the little coop inside the big coop. Can you see her feathers?

I talked to Lis again today. We seem to like to check in with each other.
"What are you cooking? How's it going?" It's so comforting.
I also got a call from another friend and we chatted for a long time. It was such a surprise to hear from her and such a nice surprise. And what a luxury to feel like I can take all the time I want on a phone call, knowing that there is absolutely nothing else I have to do.
I did get my fabric ironed for the dress I want to make. I don't have enough of the "right" sort of bias tape but I'll do a work-around. It'll be okay. A dress with pockets printed with Frida Kahlos all over it.

So that's what it's been like here today. Warm and a little overcast. We need rain but there isn't any in the forecast.
Again, the day has slipped by like a shiny eel. I don't feel as if I've really grasped anything of importance but it's been a good day despite that. Perhaps we're learning how precious life really is at its most basic levels. At least that's how I feel.
Although let's be honest- the most basic levels probably don't include electricity and internet, freezers and indoor plumbing.
But they do include eating things from one's own yard, the raising of birds who will hopefully grow up to provide protein, and friends and family, even if they can only be in contact from a distance.
That's okay.

How are you handling it? Report in if you want. I do love to hear.