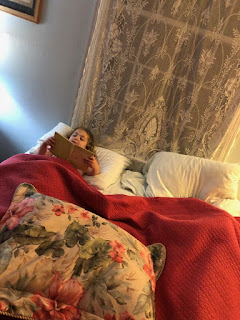 That was Maggie last night, probably around 10:30. Gibson's in the picture too but you can't see him under the quilt. He was trying to go to sleep and Ms. Sassafras Pants wasn't helping. It was at about this time that I stalked into the Glen Den, looked at my husband and said, "Your turn. I'm losing it."
And so he went in and gave Maggie the word which didn't help at all and finally, Gibson went to sleep on the fold out bed on the floor and I laid down beside Maggie and refused to let her turn the bedside light on (a small light WAS on, I'm not cruel) and refused to talk to her and refused to entertain the idea of snacks or whatever else it was that she could come up with to put off sleep. Finally, in a great and grand huff, she pulled the lace curtain over her head and laid there with so much silent haughtiness in her that it was palpable from across the bed and then, eventually, she fell asleep.
Phew.
All was well until about 1:30 when I came awake with a jolt because Gibson was shaking my shoulder saying, "Mer! I need water!"
Okay. I got him some water and a cup with a lid to take to bed with him and tucked him back in and set the cup on the floor where he could get to it.
Around dawn, or at least almost dawn, when the sky was just getting some light to it, two children were in our doorway declaring that it was morning. I declared that it wasn't, sent Gibson back to bed and told Maggie she could get in bed with us and we all went back to sleep.
A little after eight all prospect of them sleeping any more was erased and Boppy got up with them and I slept for a few more minutes until Maggie came in and asked where my glasses were and so I got up too. And put on my glasses.

Needless to say, I haven't had much energy today.
The only thing I really accomplished was cleaning out the refrigerator and doing another online crossword. I've discovered (via Lon) that the Washington Post's crosswords are available and free and I now have a serious crossword addiction and I'm not really very good at them so I sit and fool around with them and fret and try this and try that and tell myself that I'm of subpar intelligence and so forth and it's SO MUCH FUN!
I guess it beats actual work.

So. Coronavirus. Here we are. How many days ago did the Fuckwad In Chief tell us about his beautiful tests that were going to be available just about any minute? And there may be tests where you live but there aren't any here as far as I know and I've been hearing stories about people with all the symptoms who go to the hospital only to be told that nope, not yet, can't test you, go home. Stay there.
This whole situation reeks of criminality and as Trump lies, people die, not to mention the huge number of folks who have no way to make their living as gathering places shut down and parents can't go to work even if their workplaces aren't closed because they have to stay home with their children and kids who depend on school lunches and sometimes breakfasts are going to be even hungrier and we have no idea if we're being overly cautious or not nearly cautious enough because we have no way of knowing how many people among us are infected and this has gone so far beyond lies about how many people attended an inauguration that it's like comparing a child's first attempt at a hop to a rocket blast-off. Or a mud puddle to the Pacific. Or a gecko to a T. Rex. Or, or, or...
You get me.

And yet. People on FB are posting pictures of themselves on vacations and people on the Cozumel boards are asking if the lines at the airport are any longer than usual, and churches are still meeting and people are still at the malls and the gym and there just doesn't seem to be any sense to any of this.

My husband is mowing the yard with a green bandana around his mouth and nose because all of the masks at Lowe's are sold out.
Of course.
I wonder if a mask designed to protect oneself from dust and fumes and fibers is effective against viruses?
Somehow I doubt it.

Yes. I am feeling bitchy. And not about the measures being taken to protect everyone but more about the fact that people aren't paying attention. That people aren't taking this seriously.
And all the while remembering that, as I keep saying, this isn't the Bubonic plague. You aren't exposed and less than a day later start bleeding out every orifice and all your pores.
Perspective. It's important to keep it.
I just don't want to kill anyone and neither do I want to die.

In an unrelated topic, Mr. Moon and I were outside looking at the garden today and suddenly, above us we noticed one of the magnificent swallow-tail kites who spend their spring and summer here. It soared and then dipped to some tree branches where it grabbed a strand of moss in a talon. I suppose they are making their nests.
"Welcome home!" I yelled at the bird. "Thank you for coming back!" It was my moment of hope and faith.

One more thing.
Jessie sent pictures of her little family working in their yard. This one was included. 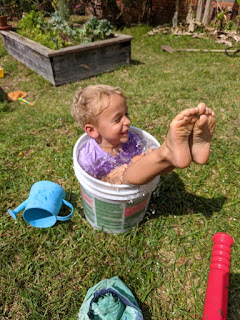 Oh August! You silly boy! He looks delighted to have his butt in a five-gallon bucket.

What's the best thing YOU'VE seen today? I'd like to know.