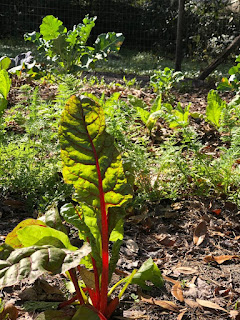 There you have a cat's eye view of a small part of the garden. Look at that beautiful chard glowing in the sun. Next are the carrots, then mustards, arugula, and some broccoli. I was out there today planting my onions and doing a little weeding. It was a joy.
And it wasn't just a joy because the day was so cool, the sun so bright, the air so not-humid or even because Maurice was there for a little while to supervise and then little Miss Violet came in to peck at some tasty broccoli leaves.
It was a joy because today, for the first time since Tuesday a week ago, I felt good.
I was beginning to lose hope that this would ever happen.
A few days ago I started using Flonase and for the life of me I can't remember which of you suggested that but THANK YOU! I also got and started taking some Sudafed. And whether due to both or either of those or just time, my ear is unstopped and I seem to have quit producing quarts of snot per day. Maybe just a pint or two. It had gotten to the point where I was truly astounded at the amount of mucus my body could create. And Mr. Moon has had the same problem. We've been going around snorting and sniffing and coughing and blowing our noses and then laughing because we were both doing the same thing. And best of all I think, I haven't felt today as if I were sick. You know that feeling? That you're just not right. Today I have felt far more like a normal human.
Well, you know, within the parameters of normalcy.

So I worked in the garden some and did a few other things and it's been a lovely day. Mr. Moon got a lot of stuff done this morning and early afternoon including collecting many bags of oak leaves from suburban neighborhoods where people believe that raking the leaves and putting them in non-degradable plastic bags is something that should be done.
To them I say- WHAT ARE YOU THINKING? And also- THANK YOU!
Free mulch for us.
Now he's at a basketball game with all the grandboys and Jessie and Vergil. Here's a picture he sent me. 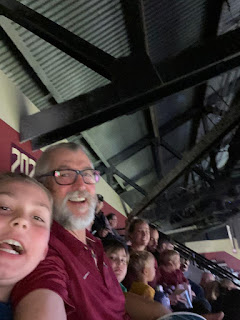 Gibson looks a bit glum, doesn't he?
Anyway, the game may be over now and August is coming home with Boppy. He hasn't had a sleepover here in a long time and this morning, feeling the way I did, I thought it would be a dandy night to have him over. Mr. Moon agreed as did Jessie.

So I better get in that kitchen and make some supper for the fellas. You know how hungry that little boy gets.

Damn, but it feels good to feel good.

P.S. I just remembered that we have to set the clocks up an hour tonight. Great. Just great. When are we going to stop this insanity?
Sigh.
Posted by Ms. Moon at 6:35 PM