Not Dipping My Oar Into The Roiling Waters Tonight 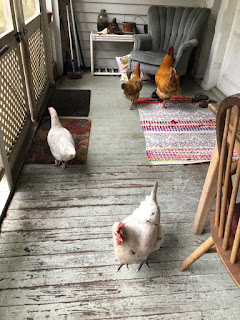 Chickens do not respect social distancing. Which is fine. They don't have to.

This is going to be a short post because Mr. Moon and I just played two hands of gin rummy which interfered with my rut routine which I am neurotically addicted to  quite fond of keeping.
Okay. I think that's the first and last time for me to use the cross-through thing. I've just really always wanted to do it.

It was a bit of a down day for me. Not sure why but hey! We're going to have them, right? I'm having the hardest time focusing on things. Beginning the simplest projects is overwhelming. Making the bed feels like a major victory. My goal today was to sweep and mop the kitchen and adjoining bathroom and I can't tell you the moral fortitude it took to accomplish that but I did which is good because I was starting to stick to the floor when I walked across it.

A really good thing that happened though, was that my oldest friend from the sixth grade called me up and we slid right back into high-school-talk-all-night mode and chatted and laughed and commiserated for probably over an hour. I could almost smell the Yardley Slicker. That cheered me up considerably, hearing that she and her husband are alive and well. She is working from home now and he is retired. Her job involves fund-raising for a national health organization and she's supposed to raise a hell of a lot of money in the next few months. I said, "Well, I seriously doubt that's going to happen."
Of course all of their events have been canceled for the time being and there's not one damn thing she can do about it.
But it was wonderful to catch up with her, even if the circumstances are rather upsetting. There's a comforting continuity to our relationship which is a small miracle in an uncertain world. To say the least. I will always love and adore her. Neither time nor circumstance can alter that.

Mr. Moon's fishing trip didn't last long due to boat problems. I was mighty glad when he pulled up in the yard, even if he didn't catch any fish.

The rose I transplanted to the garden a few months ago is already blooming. It is happy. 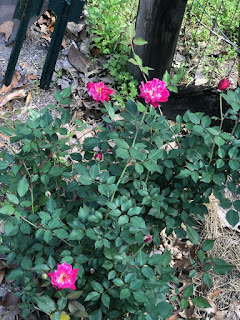 The squash is coming up. 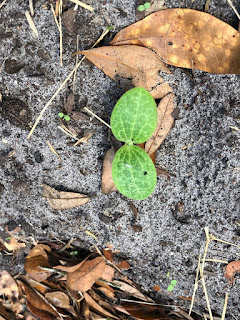 The pie I baked last night looked like this when cut into. 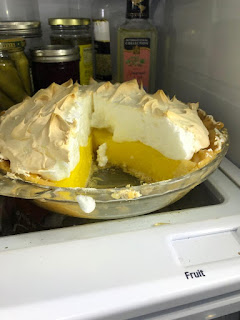 Know why it's so goldeny yellow? Because of the color of my hen's egg yolks.

The plan to get baby chicks is falling into place. I found and washed two sets of feeders and waterers today. Lily wants to start some too. Honestly, that's probably the very best thing that we could be doing right now. There are few things as cheerful and optimistic as fuzzy little peeps.
Lily texted me and asked how long I keep them inside. I replied, "Until I can't stand it anymore."
This is true.

So that's about it if you want the basic news.
I'm off to make tuna casserole which is the essence of comfort food. There will be no Cream of Anything soup in it and no American cheese so it won't be that good or authentic but at this point I still have some pride left.
"Some" being the operative word.

I'll probably get all philosophical and shit tomorrow but for right now, all I can say is that here we are and I hope that we'll all still be here in the morning.
And Mr. Moon is beating my ass at gin.
Some things, like friendship and baby chicks never change.