The New Along With The Old

I can tell the days are getting longer because the chickens are going to roost later and later. I'm watching Miss Dottie still pecking around outside the hen house, the last one not inside it yet. Well, except for the jungle fowl who sleep outside in a tree. Even one of the young ones is sleeping outside now and interestingly, he looks far more like Liberace who is definitely NOT a jungle fowl than Ringo, who is, but his mama was Dearie and she is one. I have not yet come to any conclusions about what I'm going to do about this plethora of young roosters I seem to have. Jessie signed me up for a backyard chicken FaceBook page and they're having a meet-up and swap and sale in a few weeks and I left a comment on the notice asking if anyone ever wants roosters at these things and have gotten no answer. They're probably laughing at me.

My sleep last night was not so great. I woke up over and over again and it was not restful. When I got up I texted Jessie and Lily to see what they were doing today and Jessie ended up bringing the boys out. We both, at the same time, thought about going to a local state park where there are Indian mounds. That's what they call them. Indian mounds. Shouldn't it be Native American mounds? Oh well. Here's the link for information about the park. It's really pretty cool even though the mounds themselves look like big, well, mounds with trees and plants growing all over them. But it's a very nice little park that hardly anyone visits. There are restrooms and picnic tables and displays that tell about the history and the building of these things. August tried to understand it all but mostly he just kept asking why there were trees on the main mound.

Before we went to the park, we stopped at the Hilltop which is on the way to get sandwiches. We could have made our own but you know how much I like that place and let's face it- lunch out is 99% of my social life. I like seeing all of the different sorts of people who stop in to get their lunches. Lots of construction workers on week days. Everyone orders and sits on the long bench facing the counter to wait for their food. Today that bench looked like an International Convention of Construction Workers. And probably road workers.
August walked up to the counter and said to the lady with the order pad, "Do you have peanut butter and jelly sandwiches?"
"Yes," she said. "We do. Would you like one?"
"Yes," he said and that was that for him.
So we got our sandwiches and drove the five minutes to the park. We were the only people there. You voluntarily stop and put three dollars in a wooden box and get a tag to put on your car or carry with you. We paid our money gladly and parked and walked to the picnic tables and sat at one which was in the sun which felt heavenly. It was still chilly and breezy. Levon sat by me and shared his mama's turkey sandwich and my chicken salad sandwich but mostly he just wanted some of the chips we bought. August ate some of his PB&J but was more interested in the display about the history and the audio which accompanies it. After we'd finished up, we hit the trail. Which is about .3 miles long. 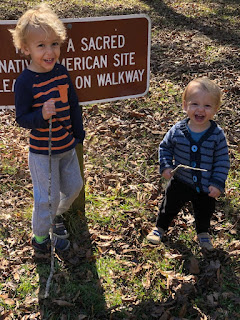 I do like the fact that they post signs about this being a sacred site though, and here they use the term Native Americans, and as such, to stay on the walkway and not to climb the mounds.

August asked many, many questions about the people who had built them. I tried to explain to him that those people had lived many, many, many, many years ago. THOUSANDS of years ago.
"Why?"
So many whys.
He wanted to know where those people were buried.
"We don't know."
"Why?"
You finally want to just say, "GOOD GOD, KID! I DON'T KNOW!" but of course you don't.
He wanted to poke a stick into the mound to see what was in there. We told him that we could not do that because it was "sacred."
"Do you know what sacred means?" I asked him.
"No."
I looked at Jessie. "How do you tell him what that means?"
We tried. And then of course he asked, "Why?"
"Because that's what it means."
I seriously doubt we enlightened him much.
We walked down a few trails and looked at animal prints in the dirt. Deer for sure. Maybe wild pig? We couldn't really tell. This led to a discussion of which animals have hooves and which animals have paws. When he asked why cows and deer and pigs have hooves I said, "So that we'll know which animals are the tastiest to eat!"
Sometimes I just have to insert some humor.

Last weekend Vergil took the boys for a hike. He carried Levon on his back but August actually walked the entire way which was over four miles. I am astounded at this. FOUR MILES! His legs are like a foot long. But he has a good pace, almost trotting over the trail in a sort of floating stride. 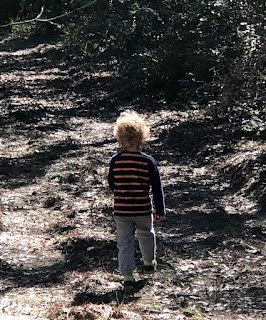 He's a natural.
But today after just a little walking he told us that he wanted to go back to Mer's house to take a nap on her bed. Where that came from, we do not know but we turned around and packed up and by the time we got to my house he had that dazed look on his face which means that he was ready for some sleep. Unfortunately, his mama wanted to get on back home and although he was not happy about that a cookie eased his pain and Jessie reported that he did fall asleep and Levon had too, so she was hoping for a tiny bit of time to herself when they got home but no, of course that could not happen because Levon woke up as soon as they got to their house.
I took my own nap on Mer's bed. I really don't think I'm fully recovered from whatever it was I had last week but I HAVE to start walking again soon. That's all there is to it.
And I will.

Mr. Moon has taken Owen to one of his basketball games and so he's not home yet. He's being a good grandfather. And suddenly, it occurs to me that it is dark and that I have not closed the chickens up yet.

And now I have. 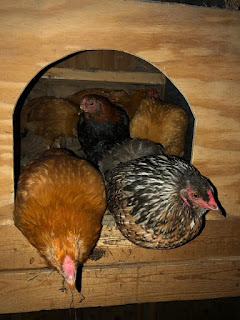 My sweet birds. With the setting of the sun, it has become cold again and I've put my Goodwill cashmere on along with a jacket and I can hear the music from the church next door. I am reminded of when my first husband and I lived in a little community which at that point was quite rural and there was a juke joint two doors down and what I wouldn't give to have a place like that here in Lloyd where occasionally Mr. Moon and I could stroll to and enjoy a beer and maybe a fried chicken sandwich on a chilly night where the Christmas lights which stay up all year long and the Budweiser signs would be all the illumination needed and I would feel at home the way I used to feel at Ms. Mabel's place when I was young.

Lloyd is packed with churches and devoid of juke joints and I have to say that our community is the poorer for that. But at least the church next to me has a bass and drums instead of a staid piano or organ. I'd have to listen to a sermon about Jesus to enjoy the music fully and I'm at a point in my life where I just can't deal with that sort of thing. My idea of heaven would have BB King with Lucille and Billie Holiday with a gardenia in her hair and a cold Budweiser in front of me, not angels and harps and golden slippers.
And of course, plenty of chickens in my yard and grandchildren in my lap to ask me why.