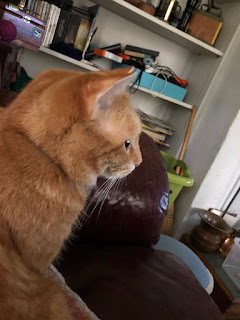 This has been the highlight of my day.
I was sitting on the couch watching Roma, a movie which is now streaming on Netflix and enjoying it very, very much. Maurice was snoozing beside me. Every now and then I would forget that she's not a normal cat and reach over to scratch her stomach whereupon she would remind me that she is not a normal cat by threatening to take my hand off at the wrist. Other than that, though, all was peaceful.
Until the most exciting part of the movie happened! There were ocean waves and children caught in a riptide and I'm not going to say any more because I don't want to ruin it for anyone but it was extremely dramatic!
And I looked over to see the formerly napping Maurice sitting up with her eyes focused entirely on the TV and I don't think she blinked until the scene was resolved at which point she laid back down and fell asleep again.

So, yeah. That was the big moment of my day.
I don't want to talk about it.