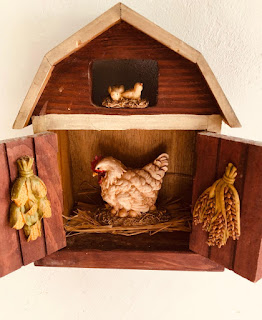 Last night as I finished cooking the soup and the bread that I had made for our supper, I felt a great sense of contentment and peace. Also, huge waves of love for my husband washed over me again and again. It occurred to me as I kissed him and stirred soup and knocked on the bottom of the bread to test for doneness that domesticity is one of the ways I have found to comfort me and give my life meaning.
Tara Westover found her saving grace in education, as the title of her book would indicate. She started at BYU so absolutely UN-educated that she had no idea what the Holocaust was. When she took the ACT test, she did not know how to fill in the bubbles on the answer sheet. She had never taken an exam in her life. And now? She has a PhD from Cambridge. She was like a dry sponge plunged into water when she began her education, soaking it all up as quickly and as intensely as she could after a childhood spent in a home where science and history were ignored and made fun of.
Me?
I have wallowed in home and family, always trying to create the family which I had always wanted and never had. A family in which a mother and a father truly did love each other and their children and where that which appeared on the surface was not that far from what was lying underneath unlike my childhood home which looked from the outside as Beaver Cleaver as any house in America but which, in reality, was a dark and twisted place filled with fear and pain. I did not want either that sort of family or the one which it tried to disguise itself as. With all of my hippie heart, I wanted room for the crazy, the good crazy, right along with the homemade bread and the garden in the backyard. I wanted laughing and I wanted dancing and I wanted music to dance to. I wanted love in all directions, backwards and forwards. I wanted to have my babies at home so that they never had to spend one minute in a plastic box, separated from me. I wanted smooching and lots of books, and chaos would be okay but underlying that would be a certain and sure foundation of trust.
And by god, I got that.
We weren't perfect. We still aren't. We had and have problems just like any family and I made a lot of mistakes. It certainly wasn't always easy or smooth.
But somehow, we mostly were a fairly joyous family. So much music, a lot of dancing, a lot of smooching. Many books. For a long time when we were raising the children we lived in a big brick house that had windows all along the back. Big, tall windows so that if you stood outside, especially at night, you could look into what was going on almost like a doll house. I loved that. We had our privacy when we needed it but there was no need to shut from view the regular goings-on in that house. I look back upon that time almost in wonder.
And you know what?  I would not have been able to do any of this without the love of my husband who stepped in and stepped up and loved me and all of the children the way he had been loved by his parents which was powerfully and unconditionally. He worked like a demon to support us. He was there when we needed him. We often took quick little weekend family trips to the beach and stayed in funky old places that smelled of cedar and time and salt.
Despite the mistakes I made I would not do anything radically different if I had to do it all again.

And here I am now, keeping house for just the two of us. I always knew, deep in my heart, that the children would grow up and leave one day and that if Glen and I had worn out our love and respect and caring for each other, we would be miserable. And I am glad we tended to our relationship throughout the years, often in what seemed like selfish ways.
Going to Cozumel was one of those ways but I swear to you- we would not be the couple we are now if we had not taken those trips so I regret nothing about them.
And I love that man more than I ever imagined I could have. We treat each other tenderly and yes, with respect. And we can still have a very good time, given the chance.

Domesticity. I cherish it. This house which I love and which shelters us is such a gift. The little bit of land where I can grow a few things and keep my chickens and where ancient oak trees spread their branches in another sort of sheltering.
Perhaps I love chickens so much because they themselves are so very domestic in their way. They have their own family and their own family rules. They have their rituals and their customs. They stay close, their bonded unit is their protection. 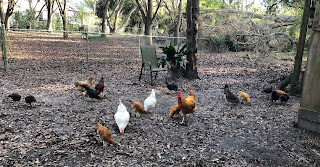 There they are. Eighteen of them, at least. Little Miss Violet is off somewhere else doing her banty wild thing which is the way she is and I love her for that. Every family has at least one.

I went over to Jessie's today. She and Vergil seem to be coming down with the nasty hoopacoodis, as my mother would have called it and August has it full on. He was sleeping when I got there with the soup and bread I'd brought them. I hung out with Jessie and the merry little Levon for awhile and then we went to check on August who had taken himself back to bed for the first time in his life. He was sleeping but I just had to lay my hand on his forehead to check his temperature. His little cheeks were rosy and his lips were too. He stirred in the bed and opened his eyes and for a moment I did not know if he was going to fall back into sleep or not but then suddenly he said, "I sick."
"I know," I said. "I'm so sorry. How do you feel?"
"Pretty good," he said.
Bless him. 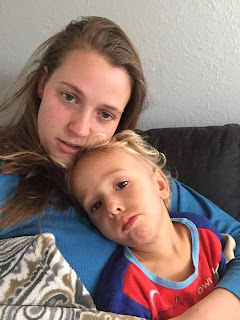 I know what my family has done. It has saved me. Over and over and over again. And it still does. Every day of my life.