"Scattered And Smothered" Would Make A Great Band Name 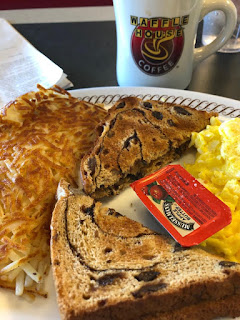 I have a doctor's appointment with my adorable and kind and attentive GP next Tuesday so of course I've been freaking the FUCK out because going to any sort of doctor appointment feels to me like I'm about to go into surgery for a heart transplant. Or something worse. I don't know.
And of course I was supposed to get blood work done a week before the appointment. This, too, I've been dreading. No, not because I have any problem with needles but because it's MEDICAL and because they will be taking something from inside of my own body which will reveal things so secret and hidden that even I am not aware of them and even if I were, I wouldn't want anyone else knowing about them.
Seriously, that's one of the things that freaks me out the most.
Like Tom Robbins, I prefer to think of bodies being filled with pure, white light and nothing else and if one can just stay away from...oh, science...one can continue on with this beautiful belief. Four years of nursing school did nothing to assuage my denial or fear and in fact, made them even worse.
So. Monday I did not go get my blood drawn because it wasn't yet a week away and also, I didn't feel well.
Tuesday, I again did not feel well.
Wednesday I convinced myself it was Tuesday again, despite the fact that I knew damn well it was Wednesday and even discussed that fact with Jessie.
So. Today there was no getting around it. I had to get up, get dressed, and get to town.
Which I did. I sure hope they process and analyze that precious blood before Tuesday. And it wasn't bad at all. The waiting room was not packed and it wasn't long before they called my name and I went back and met my own personal phlebotomist and she and I were cackling like hens before it was over and that was that.
And THEN, because I am a suicidal crazy-woman, I took myself to Waffle House.

Oh, Waffle House! How I love thee!
That's a picture of the breakfast I got up at the top of the page. Scrambled eggs, hashbrowns scattered and smothered (with onions) and raisin toast. With apple butter. A true work of art on a plate. A delight for the eye.
Was it good?
You bet your ass it was. I left my server a three dollar tip on a seven dollar breakfast because she was just so darn sweet.

Then I came on home and Jessie brought the boys out so that they could all get out of the house. August said he needed to come and tell me he was sick, which I already knew of course, and he told me again when he got here along with the fact that because he was sick, he could watch TV. He'd had some Ibuprofen before they left home and he started feeling better pretty quick. First we decided to read some books on my bed. Levon was asleep in his little carrier/car seat so Jessie and August and I all crawled up on the bed and covered up with The Duck and August had picked out a Richard Scarry storybook which had about thirty stories in it.
"That's a long book," I said.
"I need a long book when I sick," he told me.
"I understand," I told him.
We read some Richard Scarry and then he wanted to watch TV so we let him watch The Land Before Time. Levon had woken up by then and was busy crawling on his mama and asking for milk in sign language which is like squeezing an udder and it's ridiculously funny to watch him on the breast, making that sign. When he'd had enough he started playing with the toys and Jessie and I got in the kitchen and tried to come up with things that August might eat because he hasn't been eating much since he got sick. Jessie made him a peanut butter banana but he didn't want that. I found a can of Campbell's chicken and stars soup and I have no idea who bought it or when. Jessie said that she felt like grandmothers just had to have a can of that in cupboard and she may be right. I showed it to August and he said that he'd eat some of that and so I heated it up and put it in a mug and spoon fed him some of the star noodles while he watched the dinosaurs on TV but he wouldn't drink the soup part.
Oh well.
Then it was a cut-up orange. And crackers with goat cheese. Like two.
Jessie found some leftover chicken wings her daddy had bought for a basketball game watching he'd had with two friends on Sunday and she heated those up and ate them. All of my kids seem to need to open the refrigerator and check it out when they're here and I understand that perfectly. When I babysit at Lily's, I look for crackers she might have stashed away. I turn into a sixteen-year old in someone else's house, looking for the good snacks.
Levon ate a little bit of everything. I don't think he's ever met a food he doesn't like. That includes cat food but then again, all little kids seem to love cat food. And dog food.
We went outside for a little while. It's been chilly but it was warm in the sun. 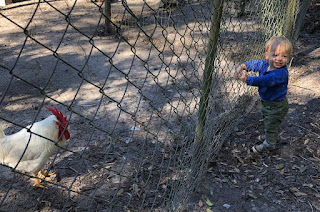 The boys immediately headed toward the goat and chicken pens next door. Here's Levon and a very handsome and large rooster checking each other out.
August started coming down from his Ibuprofen high and wanted to go back into the house soon and so we did. And then it was time to leave and he tried to talk his mother into leaving him here and picking him up later but she wasn't having that. I promised he could come back soon.

After they left I found myself fairly exhausted. I never did get this cold or flu or whatever it is the way Mr. Moon did. He's finally feeling better but he sounds like an eighty-year old man which is rather interesting. When he's talking the contrast between my beloved and familiar husband and this deep, croaky voice is disconcerting. I've just felt a little less energetic and have had some drainage and today I've started coughing a bit but I think it caught up with me this afternoon and I laid down and slept for a little while. I'm quite sure that that tiny amount of blood which was taken from my body had nothing to do with it.

Mr. Moon is at one of Owen's basketball games and then he's going to bring the boy back here to spend the night and tomorrow they're going to leave for Georgia as I have mentioned before. I'll have Maggie and Gibson over tomorrow night so that the acid of jealousy will not consume them and also, to give their mama and daddy a small break. Lily just sent me this picture. 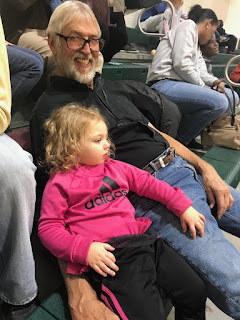 Mags and her Boppy, chillin' at the gym.

As always, life in Lloyd. I better go start supper for those men who are going to show up pretty soon. I wonder if Owen will want me to read him The Little Red Hen Makes A Pizza or not. I hope he does. I hate to think that he's outgrown it although I'm sure that if he does let me read it to him, it will be because of ritual. I can see myself old and crooked and tiny and white-haired sitting in a nursing home, holding the life-like baby doll that my children have given me to keep me content, insisting to a six-foot, seven-inch Owen or Gibson that I must read them The Little Red Hen.

You know this could happen.
"Has anyone fed the chickens?" I will quaver in my little-old-lady voice.
"Yes, Mer," they will say. "The chickens are fine."
"How many eggs did we get today?"
And they will close their eyes in saint-like patience and say, "Four. We got four."
"Damn hens!" I'll say with vehemence. "You know they're not all laying in the nest!"

Until then things will continue as usual.
If I am very, very lucky.