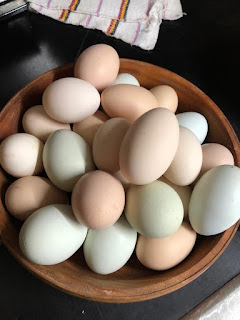 Oh, I have missed you! One whole day without writing here and I feel as if the earth is not quite turning as it should be.
But. I have unwound myself from the sheets and even washed the sheets and although I am not what you might call completely well yet, I am so much better and have only slept a little bit today and I got a few things done before that.

I did not get a flu shot this year. I never get one. And up until this week, I had not had the flu in years but I do believe that's what we've had around here. The people in the family who got the shot have not had this particular illness and the ones who have gotten sick did not. And that's just the truth of the matter. I am wishing, quite honestly, that I had gotten one and I wish that Mr. Moon had gotten one too. He finally went to the doctor today after not being able to sleep for over a week due to a headache and he was told that he has a "raging" sinus infection which I feel quite certain is a secondary infection to the flu.
Of course I could be wrong and quite frequently am but these are my thoughts on the matter.

Being ill is like being in an odd country where things look familiar but nothing is quite right. I am sure you know what I mean. And it has been that way for me. I have managed to do some reading, which is good. I have almost finished up a book I've had on my shelf for years. Sister Age by MFK Fisher and I recommend it. I've also watched the entire new season of Grace and Frankie on Netflix which I did enjoy even though sometimes the acting would make a community theater director cringe. But what the hell? It's fun and I have finally come to appreciate Jane Fonda now that she's in her eighties and of course, Lily Tomlin is always a love. Sometimes when I'm watching the show I think that if Kathleen had been allowed to hang around for another few decades, she might have been a great deal like Tomlin's character, Frankie, who never met a New Age philosophy she couldn't embrace for awhile, at least. Kathleen had that openness to her, that belief in a sort of magic and ritual, of universal love and acceptance.

I'm straying. Which is what I do best, I suppose.

Here's a picture of August eating his pancakes Monday morning before I went to bed. 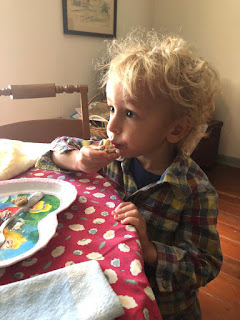 And here's one of Maggie that her mother took and sent to me. 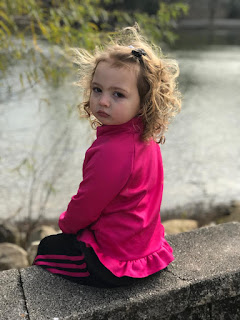 I feel as if I haven't seen those beautiful children in a month, as if I've been away on a journey, which in some ways I have.

My husband is home. He has taken the first of his antibiotics. I'm going to actually cook our supper tonight which I have not done in two days. The frogs think it's spring and are singing their hypersonic song which pierce my human ears. It's going to rain tonight and then get cold again. I can hear the magnolia creaking in the wind which is blustering its way through right now, bringing the rain and cold on its wings.
I am glad to be back to the land of the living but I'm not going to push anything until I truly feel ready.

Anyway, hello. I hope all is well with all of you.
See you tomorrow?