I Have No Idea How Any Of This Happened 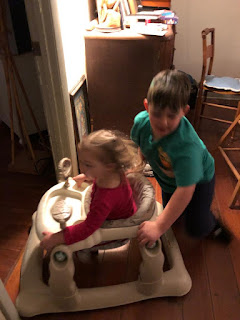 That was what things looked like last night before sleep was achieved and peace reigned over the house. I have got to take that walker some place, whether Wag The Dog, to donate it, or to the dump depot where I can set it aside where people put things they think someone else might want. I really like doing that. It eliminates the middle man, as it were.
Maggie and Gibson were actually very good. Here's Maggie, helping me make pancakes. 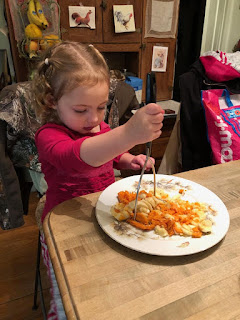 Smushing the banana and sweet potato for the batter. 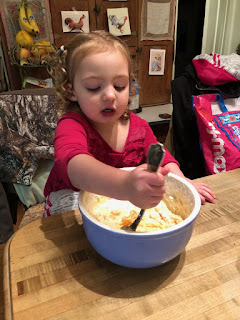 Mixing it up. She also helped me crack the egg. Which reminds me of something Gibson said when he and Maggie were carrying some eggs that we'd found on the nest.
"Here, Mer. You better carry them. I like to smash things."
The boy is honest.
We ate our pancakes and bacon and I did not burn the eggs I cooked for them. Then it was bath time and they had a good time in my big tub with duckies and an octopus to play with. They did not splash vast quantities of water onto the floor and neither one slipped or fell so it was a successful aquatic experience. I dried them off and helped them into their pajamas and then I read the same three books that I'd read to their brother the night before and to their cousin the week before. Gibson was tired and after the stories he was ready to go to sleep but wasn't quite sure he wanted to sleep all by himself in that bed in the guest room. I offered to make up the little bed on the floor in my room that August sleeps on but he decided that no, if I would just get him some animals to sleep with, that would be okay. Maggie and I collected a nice assortment of stuffed friends for him and he was content and fell asleep about as fast as I turned out the light.
Magnolia June was a different story. I put her in my bed and covered her up and she wanted cuddles and I told her that as soon as I cleaned up the kitchen I would come and give her some and I did although she was up and out of bed to check on the progress several times. After I'd cuddled her for awhile and she had not fallen asleep, I told her that I had to take my shower and that I'd be right back after that. Of course, when I got out of the shower, there was a little cherub in pajamas peeking underneath the paper shade of the door that leads into the bathroom.
"Mer! You finish your shower?"
"Yes, Maggie. I'll be right there."
More cuddling ensued and water was sipped and reminders were given as to lay down and go to sleep!
Eventually, around eleven, this happened. 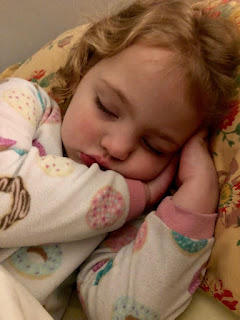 If that's not the very definition of an angel, I don't know what is.
I turned out the light, exhausted myself, and we slept pretty well. She has a little cough that woke her up a few times and there were more water sips and she woke up and wanted cuddles a few more times. I'm not sure I've ever met a child as desirous of physical closeness as Maggie. She also kisses so spontaneously. Like, if I pick her up to show her something, she'll just reach over and kiss my cheek as naturally as a blossom turns towards the sun. Gibson is sweet like that too. And Owen is still pretty free with the kisses. Or at least he tolerates them with a good amount of cheer.

I got up this morning at eight because I knew their daddy was coming at nine because of Gibson's soccer game. I roused the children and got them fed (sort of) and dressed. Here's Gibson looking ready to rumble. 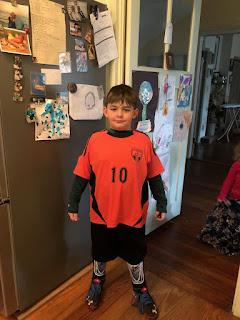 Can you believe he'll be seven in March? He's still quite interested in how you spell everything and is pretty darn good at it himself. And he can really read. I'm impressed and I'm proud and I love that he wants to do these things. You just never know what's going to engage children, do you? Each one is so different and each one has such specific interests and budding talents. It really does thrill me to observe this in all of my grands.

And then Jason came and helped Gibson on with his shin guards and cleats and Maggie on with her purple, sparkly shoes. When they left, he thanked me for having the kids over and I thanked him, as I always do, for being such an amazing father.

The rest of the day I spent in sweet, sweet solitude. I washed and hung sheets on the line, made up the beds when they were dry. I did some ironing and watched a Netflix movie ("Last Laugh" with Chevy Chase and Richard Dreyfuss) and it was abominable. Name a stereotype and it was in there. Name a trope, and they troped all over it. There were holes in that movie you could have dropped a Himalayan Mountain in. The presence of Andie McDowell whom I think is one of the most beautiful women in the world did brighten things up but
1. The material she had to work with was pitiful, and
2. She's really not the best actor in the world.
Nor is Chevy Chase. Richard Dreyfuss is better but see #1 above.
It was a good movie to watch while ironing, though, because it allowed me to concentrate on what I was doing without worrying about missing any of the shit happening on the screen.

I haven't talked politics in awhile but trust me when I say that I cannot believe we've come to the place in this country where a Cheese Doodle, lying nutjob who is currently the subject of too-many-to-count investigations is being allowed to hold the entire government hostage to fund his ridiculous fucking wall. Meanwhile, as we all know, almost a million federal employees aren't getting paid which puts their families at risk for eviction, hunger, lack of ability to pay for health care, etc., while air travel is becoming more and more unsafe, airport screening and customs screening is becoming a joke, our national parks are being left untended and uncared for, trashed and even destroyed, and a thousand other small, sharp knives are cutting away at the fabric of our country.
I'm sure he's hoping to divert attention away from the real problems this country faces, not to mention the fact that he could well end up in jail or at least in disgrace and dishonor (not that he'd care) before 2019 is over.
Well, shit. I have nothing to add about this situation which would enlighten anything or any one.

In better news I hear from Mr. Moon that he and Owen are having a fine time. "Just what his Boppy hoped for," he texted me today. And I know it is. I think it's pretty dang cool that our oldest grandson gets to experience a part of his grandfather's life that makes him so happy. Getting up early, early to sit in a deer stand and watch the forest come awake, eating in the restaurants where his Boppy eats, sleeping in the motel his Boppy stays, meeting his granddad's hunting buddies and some of their grandchildren, having, hopefully, some good bonding conversations. Or, just talking about shit, the way guys do. As far as I know, no animals have been harmed in this adventure yet. Which is mostly the way these hunting trips go.
Once again, this situation is nothing I could ever have imagined when I was growing up and wondering what my future would hold. First of all, I seriously doubted I'd live long enough to see grandchildren; secondly, me? Marrying a hunter?
Turns out that life is absolutely not anything we can predict. We choose to go to a certain bar on a Friday night wearing a certain sweater that keeps slipping off a shoulder where an improbably tall man asks us to dance, we say okay, and the next thing we know, your husband of almost thirty-five years is off in Georgia with your first grandchild, both of them wearing camo and you've learned to cook venison. 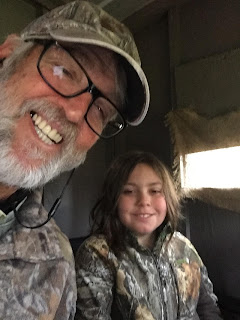 So it goes and so it is.

What a grand ride it can be.