Not Planning My Funeral Quite Yet

Look. I just love my doctor.
That is all.
He is so freaking kind I can't believe it.
"How've you been?" he asks as he swings into the room. And as always, I am taken aback at just how darn cute is. Look- cute doesn't hurt in a doctor, especially if it's the friendly kind of cute that simply makes your heart happy. He seems so entirely approachable.
And then he started going over my blood work, congratulating me for GETTING the blood work done because he knows me and knows how hard that is for me. And everything was pretty good except for my cholesterol which is a fucking mess. I told him that I'd like to try and do something dietarily to help that.
"I will admit," I told him, "I could eat less pork."
He laughed. And agreed that I could try that.
We discussed Mexico. We discussed his little boy. He showed me his picture. He's adorable, just like his dad. He told me that he did not have one thing to fuss at me about. I told him that I wished, in that case, that I HAD brought him the dozen eggs I'd thought about bringing him. He let me know that he would love fresh eggs. That he's a vegetarian and eggs are an important part of his diet. He got me talking about chickens. He excused himself, went out for a moment and came back with a picture of a chicken that said on it something like, "When I grow up I want to retire and raise chickens."
"I keep that in my cubby," he told me. And then he told me where he'd gotten it and some backstory there which concerned his wife and a special place that means a lot to him. And we talked about chickens some more and all of a sudden he says, "Let me check your blood pressure again," because it had not been that good when the nurse had taken it because my blood pressure always spikes when I go to the doctor.
"No," I said. "It'll just be awful again."
But I got up on the table and he took it while I was still talking about the problem of too many roosters and damn if it hadn't gone down to a level that is not only normal but also the lowest of any reading I've had in a doctor's office in years.

I am so grateful I found this kind doctor. He is not afraid to transcend that wall between himself and the patient which is so very rare but which, for a patient like me, is so very important.

And then I met Lily and Jessie at Costco with Maggie and August. Levon was at home with his daddy and the two three-year old cousins had already been to the library story time and were in a merry mood. 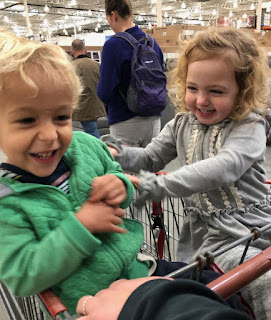 First it was tickle time. 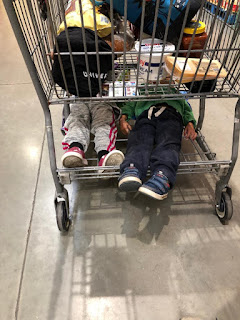 Then Magnolia decided to ride on the bottom of the cart. "Come on, August!" she said. So he joined her. 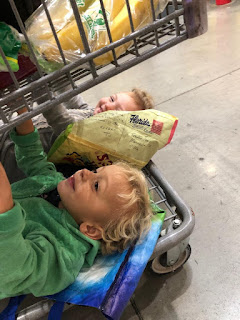 This made them happy for at least half an aisle.
When we left the store, Maggie ran to the wall outside and said, "Take our picture!" 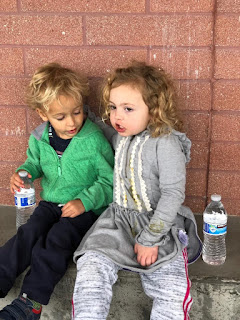 And so we did. I suggested that they kiss which only inspired August to jump off the wall entirely.
Sigh...

I love those kids so much. I told them at one point that they cracked me up.
"We crackies," said August.
"Yes you are," I told him.

And so the rest of the day has gone by with me in the best of spirits. Getting a doctor's appointment over with is tantamount to the relief a junkie feels when he's scored.
At least I would imagine.
Of course the feeling won't last forever but for right now, it's a real good high.

I got to see August again later on when Vergil and his friend Sam came out to borrow Mr. Moon's Jon boat. Not only did they bring August but they brought Sam's ten month old little boy who is gorgeous and has huge blue eyes and indescribably thick, long eyelashes. I wanted to grab him up and start nomming his big, beautiful cheeks but I did not. I just flirted from afar. August and I went to the trash and recycle place- our so very special Mer-and-August thing to do. He just loves sitting in that booster seat like a big boy and we even stopped at the Post Office on the way back. 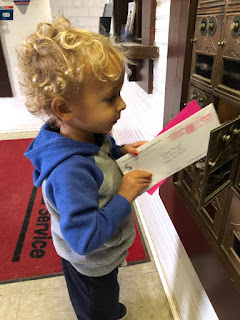 I got six nice eggs today from my sweet hens. I have determined that perhaps at least five of the young chicks are roosters.
I am making venison chili.
I feel somewhat reborn and renewed.
And although there may be chicken shit on my porch I would never, EVER serve fast food hamberders to any guest in my house.
I'm just classy like that.