Back In The Arms Of My Babies! 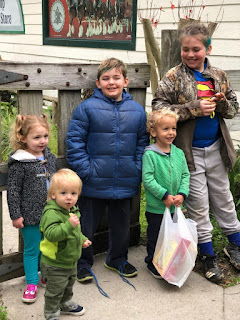 Even though today was gray and chilly and damp, it was a wonderful day. Everyone but May was able to make our little gathering and the Hilltop was the perfect place. I have spoken of this place before but I think it's probably hard to visualize. It was originally a country store, indeed set on a hilltop where things like milk and beer and animal feed and basic supplies could be bought. And then someone came up with the idea of serving sandwiches and desserts and now they have a rather large group of customers who come just for the food and will stand patiently in line to order it. There are three huge boards with menus on them. All different. One may order anything from pulled pork barbecue to a Cuban sandwich to a grilled cheese with tomato to a pork chop sandwich to fish dinners to chicken salad to fried chicken to fried pickles to an in-house made black bean burger to, well...
The choices are endless.
So everyone gets what they need and what they want and you stand at the counter and order and they call your name when your order is up and you can get your drinks at the drink station (sodas and tea) and then you pay.
And then...you eat.
A lot of people take their food home with them but we like to eat outside together on the picnic tables.
Oh. I forgot to mention the entire refrigerated case of cakes and pies sold by the slice although we never seem to have room for dessert.
Good GOD, y'all! 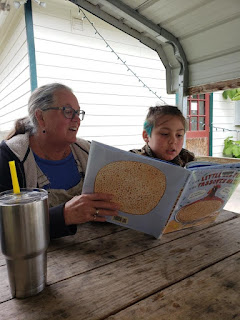 After we ordered, Owen was very excited to read a book to me that he'd gotten out of the library. His school is having some sort of fund-raising event where we pledge money for each book the kids read out loud to someone. Owen had found this book which he knew I would love because of the many, many times we've read about another Little Red Hen who makes something to eat. 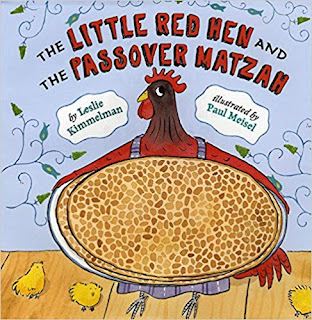 It was awesome! He stumbled a bit over things like "Oy gevalt!" and "schlep" but we figured it out. He wanted to know what those things mean and I was quite happy to give him the benefit of my tiny knowledge of Yiddish. And Gibson read Mr. Moon a book! That child is reading really well. He's a hoot.
As we all know. 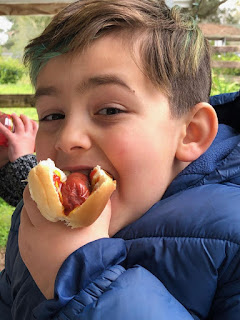 He got a hotdog. 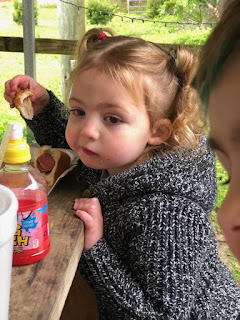 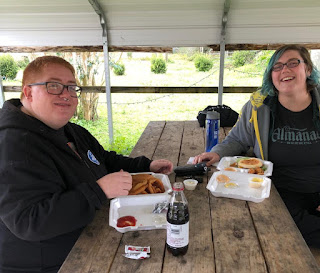 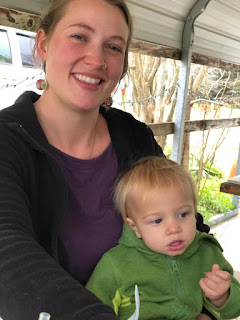 Levon and his mama. 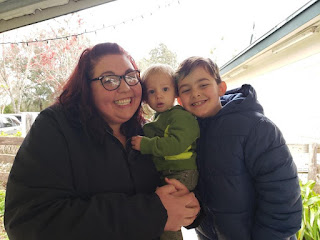 Lily and Levon and Gibson. Do you like Lily's new glasses? I do.

It was just so much fun. We ate and shared things and laughed. The usual.

I sure do love my family.

Finally, August asked if we could go home. It WAS chilly and so we all kissed and hugged and Mr. Moon and I had driven with Jessie and the boys as they'd come to our house a little early and when we got to our house they came in and August wanted to watch TV with Big Boppy, of course, and so we all settled in the Glen Den and watched a really darling movie called Sing which is one of those rare movies that can absolutely keep adults entertained at the same time it charms the children. And the soundtrack was wonderful. It grabbed me from the opening scene.


It did not hurt that the main character is a guy named Mr. Moon and that his theater reminded me of my beloved Monticello Opera House.
So August sat with his Boppy 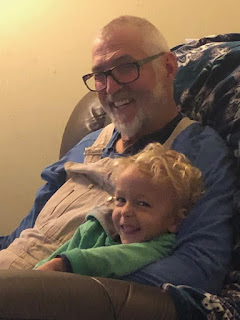 and we had hot tea and were warm and cozy and Levon did gymnursetastics and played with toys and clapped his hands when it was appropriate and when the credits rolled, Mr. Moon and Jessie danced to the music.

Yeah. It was a very good day.

Now I've made a soup and Mr. Moon is watching an FSU basketball game on the TV and it's a good night to be reminded of how lovely it is to have a cozy house where it's warm and there is light.

I am so damn lucky. Sometimes I don't even believe it. Well, to be honest, I mostly don't believe it. And yet...I know it's true.