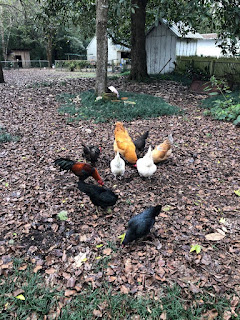 Here are just a few of the chickens. I swear, I was hanging clothes when I saw almost all of them running from one part of the yard to another and I thought, "Oh my god! It's a herd of chickens!"
Actually, a flock. But still, so many.

So yes, I hung clothes, I washed more clothes. I dried some of them in the dryer. The clothes I hung outside are still outside because I went to Publix and Costco and didn't get home until almost six and August was already here and I had to unload all of the groceries and make the supper. Right now there are more clothes in the dryer and another load in the washer and one more load to be done.
Good grief!
But supper is almost ready and here's my two handsome fellas enjoying beverages and watching TV. 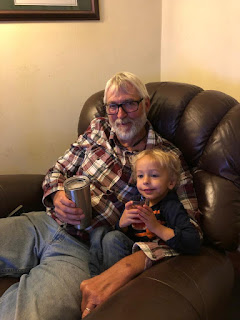 I will get August's attention after we have eaten and he's had a bath which he will undoubtably want his grandfather to help him with. At that point he will let me put his pajamas on him and read him some books. I have made up his bed right beside ours and Old Monkey Zippy is already under the cover, waiting to be slept with.

I feel like I've hit the ground running and that's not so bad. I still haven't entirely finished unpacking but my goal for tomorrow is to finally get that done.

It's been another good day. May we all sleep well and peacefully tonight.