Philosophies, Theories, And Cheese Dip So Good That Eating It Once A Year Is Enough 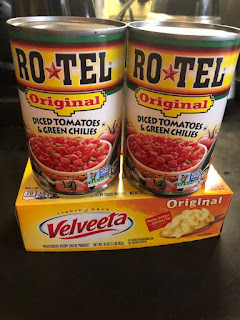 This is what I celebrate instead of the Super Bowl. In fact, the Super Bowl is, in my opinion, the one real excuse to make and eat Ro-Tel/Velveeta cheese dip. I will make it and then take a small bowl of it and hide somewhere in the house and eat it while everyone else is eating the rest of it and watching what I presume is a football game.
I won't really hide. I will eat it with pride and with relish. Not pickle relish. You know, the other kind of relish which means enjoyment.
Glad I straightened that out.

So. Publix encounter #2 of the week. On my way into the store a nice looking older man wearing an Army cap walked in and said "Hello," and I said, "Hello," and he said, "How ya doin'?" and I said, "Fine thank-you, how are you?"
"Better than a kid on Christmas morning!" he said with real enthusiasm.
"Really?" I asked. "What happened?"
"I turned 74 and every day is like Christmas!"
I grabbed my cart and said to him, "That's wonderful! Thank you for sharing that with me!"
And I meant it. His joie de vivre was as evident as his grin and every bit as contagious.
And then he proceeded to tell me that he'd been around the world four times, all due to the Army and joining it was the best thing he'd ever done and he'd lived in Germany for seventeen years with his family and he could speak German and Vietnamese and Norwegian and Russian.
And I believe him. He just charmed me to pieces.
For some reason I said, "Well, I'm not going to ask you what you think about Putin and Trump."
He looked around to make sure no one was listening and said, "Putin ate Trump for lunch and spit him out."
He then went on to tell me a few things about Putin and about Trump and about following orders in the Army (it's easier to beg forgiveness than to ask permission) and what he thinks about Trump and his foreign policies, specifically his withdrawal from NATO.
Let me just say, he's not a fan.
He was cool. I could have talked to him all day long. As it was, we blocked the area in front of the avocado display for quite awhile.

I have had a good day generally. I've taken everything slowly and just enjoyed it all, even the cleaning out of the hen house. My neighbor came over to return a book. I've been recommending and giving him books to read from my library and that's been a joy. First I gave him Keith Richard's Life which he loved, and then Tara Westover's Educated which he also loved. "You want another one?" I asked him.
"Yes!" he said.
I sent him home with a copy of Lonesome Dove which he'd never read before. I told him I was jealous of him getting to read it for the first time.
And I am.

I finished up Ms. Maggie's dress. 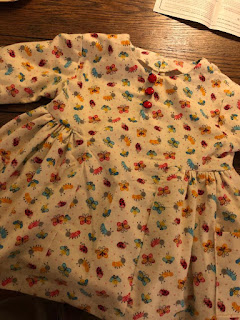 I hope she likes it. As with almost everything I sew, at least it's soft. I bought a jar of buttons at Wag The Dog a few months ago and in it were about twenty ladybug buttons. Four got used on this dress. Three on the front and one in back to fasten it.

As I sewed, I listened to three more episodes of Mormon Stories podcast. Yes. I still listen to those. Still have no real idea why but I figure there must be a reason. The episodes I listened to today were interviews with a historian who has studied the authenticity of not only the Book of Mormon but also of the Bible.
Did you know that there never were men named Matthew, Mark, Luke, and John who wrote the books attributed to them in the New Testament?
I mean, I suspected as much but he, as a scholar and historian slayed the argument for them. But here's the funny thing- even though he is quite certain that whoever wrote the Book of Mormon was someone with a Bible living in the early 1800's, he is still a believer! Not in Mormonism, per se, but in an offshoot of that church called Community of Christ.
Just goes to show.
But he talked a lot about the First People (as he calls them) who lived here before white guys got here and how amazing and advanced their cultures were and how many people lived on this continent before they got wiped out by disease and violence. I'm not going to go into the whole thing but he gave me some new knowledge and perspectives about how even I view Native American culture and their place here before the whites came over. He spoke of the mound builders and that was a timely coincidence.
I am fascinated by religion. Let's just face it. If I had it all to do over again I might have become an anthropologist with my main focus on religions. Or maybe an evolutionary theorist like the guy I heard on another podcast two days ago, Bret Weinstein. He was on Dax Shephard's podcast, "Armchair Expert" and he gave me enough to think about for the rest of my life. I, too, have always loved to try and figure out behavior via an evolutionary standpoint and he not only verified some of my own theories, he offered more. He talked about everything from sex (which is probably the most frequently discussed topic on Armchair Expert) to religion. His take on the subject is that religions, although verifiably untrue, must carry something which is quite valuable to humans because it has been such a persistent and strong force in human society throughout history.
I have been pondering this ever since, as you might imagine. I can think of a lot of reasons people get into religions (and I'm including all religions here from Catholicism to cults to Hinduism). To have a community, of course. There's something so very human in the need to be able to identify and gather with like-minded people. And then there's always the fact that religion has traditionally given us answers to the Big Questions like Where do I go when I die? and What is my purpose here on Earth?" Plus, it's a great way to control people. And gain power. And money. And sex.
But I digress.
In yet another podcast I listened to recently, John Delihn, the founder and host of the Mormon Stories podcast, playing the devil's advocate, asked a different historical scholar who no longer believes in any god how life can make sense without God in it.
"It all makes sense until you put God in it," the scholar historian said.
Which made all the sense in the world to me and Delihn, who has been excommunicated from the Mormon church, chuckled.

Okay, okay. Enough of that.

It's Friday night. The church is banging tonight. It's gently and softly drizzling. If it's not raining tomorrow I think I'll go to Gibson's soccer game which is at the reasonable hour of 11:00. And then maybe I'll bring those grands over here for some Mer playtime. I miss my big boys and my little girl. Meanwhile, I'm content and glad to be exactly where I am with my husband in this sweet old house that wraps its arms around my life and opens to receive the ones I love anytime I ask.