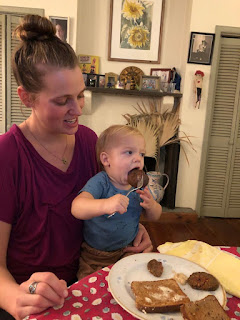 Oh my goodness! Such a busy day and I have to admit that I am actually exhausted.
This reality shit is tiring as fuck.
But, also good.

Jessie got here with the boys this morning and August was so excited he was literally vibrating, the way he does, in his car seat. We loved on that child and grabbed him up and he was happy to see me and told me he'd missed me but it was his Big Boppy, of course, whom he followed around and wanted to be with. It was beautiful. And Levon let me hold him and I kissed him up and squished him with my love and kissed and hugged his mama too.
And then, in between playing and hallway dancing to the Rolling Stones and rescuing a one-year old from the stairs, I made a very late breakfast because we were being slow, slow and I was trying to figure out where I was and who I was and that is not an easy thing to do sometimes.
But that's how Levon eats sausage. And here's how August eats toast. 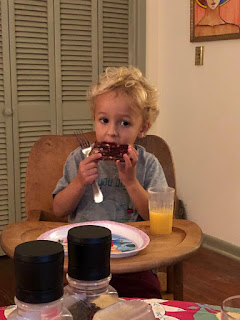 Jessie jumped in and started cleaning. That girl! She got out the vacuum cleaner she'd given us and went at it. And there was sweeping and wiping and soon the house smelled of coffee and sausage and Fabuloso and I felt as if I was back in Mexico where if there were a national scent, it would be that of Fabuloso which is a cleaning product, for those of you who are not familiar with it and its wonders.

I stopped in the middle of everything and read August a book. Oh my GOD! If you've never read this beautiful, beautiful book, you should. August loves it as much as I do. And it's got an abuela and a little boy who wants to be a mermaid with all of his heart. It made MY heart swoon.

And then came Lily and her contingent of my grands. It was so good to see them all. So many kisses! And suddenly, there were snacks and cocktail glass mermaids and bowls of water for beaches and toys and Christmas presents opened. Lily and Jessie hadn't given the children each other's presents yet because Jessie had been in North Carolina so we even got a taste of that chaos. 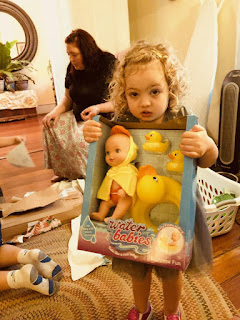 Maggie adored this present although she was not very happy about having to pose. Believe it or not, she was actually saying "cheese" when I took this picture.

Owen was having one of those days. I can see the teenager in him about to come forth and it's hard and I remember how it felt, despite it being a million years since I was his age. So many emotions and very few of them pleasant but Levon gave him solace. He loves that baby. And Levon loves him. 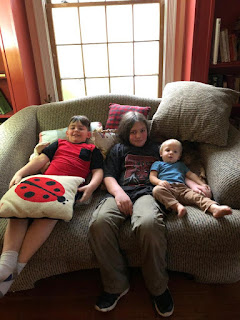 Gibson loves him too. "He's so ADORABLE!" he says. 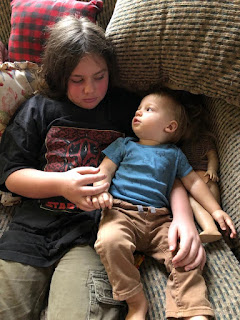 And he is. He's talking a lot and walking really well and can climb a stairway halfway to heaven before you can blink your eyes.
August wanted to hold "old monkey" and of course I let him. He loves that Zippy. He can't wait to spend the night again so that he can sleep with him. When I wanted to put Zippy back up on the mantel where he lives, August said, "Let me give him one more hug." 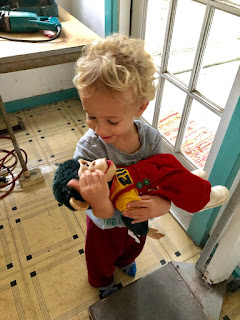 And I did.
Then we went out and found eggs and fed the goats next door which never gets old. And Maggie wanted to hold two eggs and then she did not want me to take her picture so I got this one which I love. 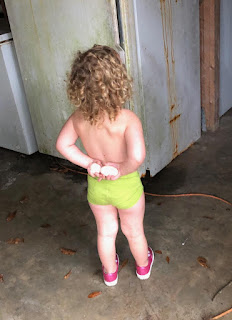 My curly-headed granddaughter. You should see her buckle herself into her car seat. Properly. She also picked a bathroom door lock at her house today using her own tiny screw driver. She is a clever little child.

And then everyone packed up to go home and I tried out the washing machine again and it worked fine. I think it was the huge quilt I put in it last night that caused the problem. One should probably not attempt to do laundry at 2:00 a.m.

And unpacking commenced and more tidying and somehow, it's now after six and I've got bread rising and greens picked for supper and yes, I still remember how to cook, I think. I'm starting to feel like my house is mine again. It's always a process, isn't it? I call it "peeing in the corners" which of course I do not literally do but there are rituals which must be observed to make the house aware that I am home.
The chickens seem to be fine. The little ones are almost as big as their small mother and the dark ones are looking just like her. Liberace almost led his entire harem into the hallway from the porch today but I dissuaded him from the idea that this was acceptable. I will take pictures tomorrow.
We have a wasp infestation in the house. They are coming from somewhere in the library but appear to be stunned and the only sting was received by Mr. Moon who wrapped some up in a napkin to take outside and one got him through the napkin. I hope they're not in the walls but this is a real possibility. It rained until early afternoon and it is now getting cooler. I can hear the frogs singing in the swamp beyond the railroad track.
I did not go snorkeling today and am not getting ready to go out to eat. I do not hear the sound of mopeds and people talking about the dives they took and where they'll be going tonight for supper or the clank of scuba tanks or the deep, low blasts of the cruise ships as they leave port. My love is not stretched out on the bed, waiting for me to finish my make-up.
But I can use the water from the tap for cooking and drinking and hey! The internet is pretty darn good here.
And I got to see my grandchildren. There is singing at the church next door. I smell of garlic and soy sauce rather than perfume which is not such a bad thing. The sunset over the trees to the west of us was quite pink and lovely tonight but we did not sit and watch it and blow it a kiss when it went down.
I'm still getting adjusted to throwing the toilet paper INTO THE TOILET!

Here I am and south of me there is a little island where I always leave a part of my heart and life goes on without me.
I can still feel it there, though. It's a powerful thing.
So is home.