We Were Wild And Crazy 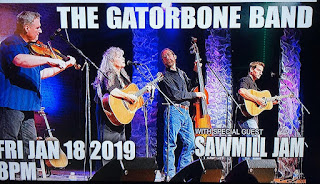 Oh my goodness. Last night was such a gift. I really tried to just pull up my big girl panties and put on that make-up and the silver bracelets and act like going out on a Friday night was no big deal whatsoever but for me, it was a big deal. But I did it. The venue where they played is about four thousand miles from our house. Okay. Not really. But it did take us a while to get there. We got behind someone driving 24 miles an hour on the road to the highway and that road is so twisty and turny you don't dare pass anyone and I felt like I should text Lis that we were on our way and would be there in two hours.
Somehow though, we managed to get there before the opening act went onstage and were able to say hey to the band. I don't even have any idea how long ago I met Lis and Lon, much less Gabe (the other guitar player) and Jason (the violin player) but I will say that I asked Jason last night how old his little boy was and he said, "Fifteen."
I remember when the kid was born.
Lord but time does pass.
Gabe and his wife have two children just about the same age as Owen and Gibson and I met him way before they were born.
It was so good to see everyone. I miss Lon and Lis so much. They are Glen's and my heart-partners. I swear. Someone had brought in a picture last night of the two of them onstage at the first gig they ever did together which was over forty years ago. Gabe looked at it and he said, "Yep. There's Lis. She has Lon and she knows that this is what she's going to be doing for the rest of her life."
Absolutely.

Our table was front and center. We could touch the stage. And it was a night of pure enchantment. How many times have I heard these people sing and play? Probably close to being in the hundreds of times now. And still...I am moved to tears each and every time.
This is one of the songs that always does it to me. Lis wrote it and it is an incredibly beautiful song and it allows her to use her soaring angel voice. That last note just breaks my heart.


This wasn't from last night but from a concert they did at Flagler College in St. Augustine. But they did it last night and yes, I wept. Mr. Moon held me to him and it was as sweet an evening as I'd ever want to have.

I am shy to take pictures, much less video but here's a picture I took of the two people who mean so very much to me and to so many others. They truly are beloved. 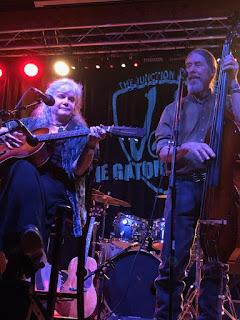 I really like the place they played. I'd only been there once before and that was some time back. They've made it so cozy and there are now booths by the bar in a room separate from the stage and they offer good food. Glen and I split some crab cakes and slaw before the show and I loved every bite. We sipped martinis that were as good as any bar martinis I'd ever had.
The best part is that the sound in the listening room is very fine. I claim absolutely NO musical talent or abilities but I do have a good ear for sound. This may be simply because I've been to so many shows. I was married to a musician at one point and if someone's vocals aren't loud enough or someone's instrument is too loud, it bothers the hell out of me. But last night, the sound man got it just right.
The place is called The Junction At Monroe for any Tallahassee readers and I'm sure you already know about it.
And so it was a beautiful night and after the show, Mr. Moon helped roll up cords and load up the instruments. They were doing a turn-and-burn, leaving right after the gig and Jason had to drive all the way home to Orlando and Lon and Lis and Gabe drove back to St. Augustine.
It was so hard to kiss them goodbye but they'll be back for another gig on Valentines and are going to be spending the night with us and that made it easier.
God, I love those people.

And then the craziest thing of the night happened. We were on our way home and I said, "How late does Whataburger stay open?"
"Twenty-four hours, I think," said my husband. "Does my sweetheart want to go there?"
His sweetheart did.
Oh. My. God.
We went to the Whataburger at midnight. Which is insane.
First of all, we were still up at midnight.
Secondly, I absolutely cannot remember the last Whataburger meal I've eaten with the exception of some of their delicious breakfast taquitos which we consumed in mass quantities after August was born. I think that Glen bought them out that morning.
But we ate there last night. And I have to say- Whataburger at midnight is an interesting place. We felt sinful and wicked and wild as teenagers when we walked in to the florescent lit place. A man and his little boy, probably about six, were waiting on their food and that little boy who was wearing blue kid glasses, did not stop talking. His dad listened, barely saying a word, and I swear- that child was explaining the universe for the fifteen minutes they were there. I looked at the dad and smiled and he rolled his eyes and sort of smiled back.
There was a lady sitting in a booth with an entire bag of what I think was embroidery thread. I did not want to stare. She had the remains of a meal on the table but was industriously doing some sort of needlework in her formica and plastic booth. At least she had good lighting. What was her story?
There was a beautifully dressed and proper looking older woman who looked like she'd just gotten out of church eating very slowly and tidily. And other people came in who truthfully, looked as if they might eat at Whataburger quite frequently.

And then there was us.
I ordered a jalapeno cheeseburger (yes! Yes I did!) and it was amazing.
You may well ask- how drunk were you guys?
Barely tipsy is the answer.
Mr. Moon got chicken strips and onion rings which he shared with me. It was a rather trippy experience. But very fun.

When we were driving home we were, of course, expressing some regret.
"It seemed like a good idea at the time," I said. And then I added, "Well, not really."
We laughed.

We managed to be in bed by one a.m. and amazingly, survived our wild night out.
No blood, no foul, as they say.

And today has been pretty lazy for me although Mr. Moon had to go to town and pick up a customer at the airport and deliver her new car to her. All before noon.

My chickens laid me seven eggs today and I am getting a new egg which I do not recognize and I have no idea who's laying it. I am quite certain that none of the young ones are laying yet.

I've done some ironing and watched six episodes of the new season of Grace and Frankie which I have to admit I love. The best line I've heard so far came from Frankie (Lily Tomlin). Her son had hired a home health care aid and Frankie told him, "He failed his drug test. I asked him to smoke with me and he wouldn't. I had to fire him."

The weather is changing. It has rained on and off this afternoon and the wind is blowing and tomorrow we're going to have freezing temperatures even though I am barefoot on the porch right now. Mr. Moon is in a deer stand. The season is over as of tomorrow I think, and despite all of the many, many hours my husband has given to the passion and pursuit of venison, we really would like to have a bit more sausage for the freezer. He told me before he left, though, that the deer are shy and cautious in windy weather as they can't hear properly and the movement of the trees and bushes freaks them out. Deer are not stupid.
Just got a text. No deer.

Oh well.
We certainly have eggs.
And love.

And that's more than enough.