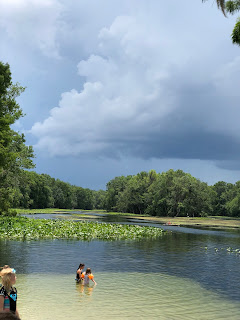 What a strange day.
Bourdain's death has been a bitter pill to swallow and I've felt my throat close against it since I first read the news this morning.
Of course the mind wants to run on that hamster wheel of why, why, why but I'm not really doing much of that. I did not know him and it doesn't matter. It all adds up to the fact that he must have been in horrible pain and now he's not.
I'm just sad.

Lily texted and asked me to join her and their housemate and the kids at the Wacissa and I did but wasn't there long. The sky began to grow dark and thunder began to rip and to top it all off, Magnolia got some yellow fly bites and her beautiful little cherub legs began to react with an all-over rosy redness. She scratched and cried, "My boo-boos! My boo-hoos!" and we figured we better get to my house and get a Benadryl in her which we did.
But it was still good to be at the river, to dive in and cleanse even for just a second or two.

I got a good rainstorm here in Lloyd and then it cleared and there were blue skies and then about quarter to six, it began to rain again and the thunder shook this old house and I am not sure I've ever seen so much rain fall in such a short amount of time and it was wild.


That was after the initial letting loose of the water and the wind and it had actually slowed down a little. Right now it's still thundering and the rain is still coming but far more gently.

I hope none of my chicks drowned.

I hope all of you are safe and dry.

And as our darling 37 Paddington said today in her beautiful post, "Best to be kind, because we cannot know."