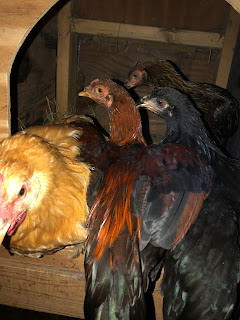 I don't want to talk about the fear today. Or the terror. Or the evil. Or the ghastly realities of it all.
No. I really don't want to.
I'd rather say that I took that picture last night of my beautiful rooster-in-training with his wings over two hens, Apricot and either Vera or Viv. I can't tell them apart.
Look at the colors on that bird! He is otherworldly, he is of another time. He is gorgeous.

I just woke up from a tiny nap and when I went out to the kitchen I found a note informing me that Mr. Moon and Owen had gone to go get crickets. They are going to get up early, early tomorrow morning to go fishing on a lake and need the crickets for bait. Boppy is going to make Owen a cup of coffee (don't tell Lily) which will no doubt be 90% milk and sugar, but still- coffee. So grown up. Mr. Moon's daddy did the same for him when he was eight years old but instead of going fishing, they were going to go move a mule or something involving a mule and my husband has never forgotten that and he wants to give that memory to Owen. They went shopping together yesterday for a new reel for Owen and I would not want to have to lay a bet on which of them is more excited, although I think the money might be on the grandfather.

I went shopping today with Lily and Owen and Magnolia for camp stuff. Shorts and shirts and underwear and socks and pajamas and bug spray and so forth. Gibson was at his aunt and uncle's house, playing with the Darling Lenore. While we were in Target, it began to pour rain. It thundered down on the roof of Target and all of us raised our eyes upward. It was so loud that we would not have been surprised to see the ceiling simply collapsing, allowing that sky flood to have its way with the mannequins, the clothing, the pharmacy, the check out lines, the Starbucks, the toys and books and electronics and housewares and all of it, washing it all useless, us too.

Then we went to Midtown Pizza where May works, to say good-bye to Jessie and August and Levon although they are only leaving for a week. Still. My heart aches at the thought although honestly, Vergil needs more time than that with his family on the cool and shady mountain where he grew up, to be part of all of that again and those boys need love and kisses from their mountain kin.
Levon is suddenly running a temperature but not very fussy. Jessie debated about taking him to the doctor but decided against it. Odds are that he's got a virus and there's nothing to do except nurse him and watch him and hold him. He was happy, despite the fever, grabbing at whatever food he could grab, happily gnawing away at a piece of pizza crust. Maggie and August sat together companionably and shared conversation and stickers and pizza and when we were leaving, they hugged and kissed so sweetly that all of us melted and said, "Awwww..."
The little blonde curly-headed cousins. They could (and are now) being mistaken for twins, simply on the basis of their hair.
Did I get one picture?
No. Because I forgot to bring my phone in.

While Jessie was trying to eat a salad and hold both babies on her lap, I said, "Give them to me" and she did and because his brother was sitting on my lap, August happily did too, and I sat there, sharing pizza crust with Levon, able to bend and kiss one head and then another and thinking, "This is. We are. I am. I love," and it was a silent poem prayer of gratefulness for all of my children and my grandchildren and for Rachel who was with us too and for Gibson, who was with Lenore, and for my husband, who was working, and for all of our sweethearts and for all of us and how lucky we are, how fucking blessed to have what we have which is not great wealth or riches but simply the opportunity to live without fear of being torn from each other and to be able to reach out and hold and touch and kiss each other, to want to do these things because we are family and we can pass on memories of a cup of real coffee at the age of eight and fishing and checking for eggs and eating MerMer's pickles and loving and being loved, being loved, being loved.

That's all any of us want if we have the sense to know it and it's not too much to ask and it's a sin to deny it to anyone because of race or creed or color or belief or gender or gender identity or geography of birth or ability or anything at all. We are humans. We are mammals. We are animals. We are created of stardust, we are part of this earth and its life and as such, we have the right to struggle along with all of the apes and the birds and the trees and the lizards and the fishes and the insects and all of the sentient beings to make our way as best we can on this tiny water rock as it flows through the cosmos carrying us with it. 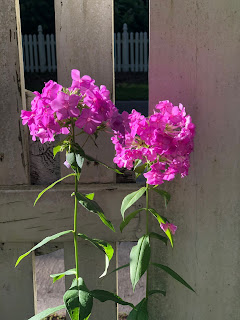 All right.
That's all.