I'd Say "Can It GET Any Hotter?" But I Know It Can. And Will

Oh, y'all. It is just so fucking hot here! Supposedly it's about 92 but it feels like whatever temperature hell is. I went out and pulled up all the kale and fed it to chickens and goats and by the time I got to the goat pen all of the colors in the world were looking really bright and fancy and a little weird and I said, "Well, that's enough of that bullshit," and put the yard cart away and came in the house.
Here's a thing I found on Facebook recently. 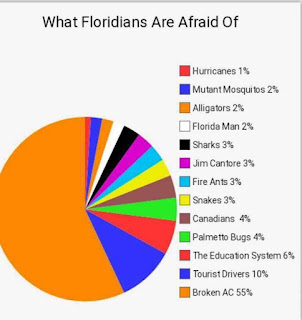 I would say that's fairly accurate although I don't agree with only 1% of us being afraid of hurricanes. I think it's about the same percentage of those of us who are afraid of a broken AC because as we all know, hurricanes inevitably cause days or weeks of power outage and if there's a power outage, you can't use your AC.

So first of all, Mr. Moon and I both slept for a crazy number of hours last night. We didn't go to sleep until around midnight which is late for us but he didn't get up until almost ten and when I got up, I could NOT reconcile what the wall clock in the kitchen was trying to tell me with those little hands and numbers with reality until I looked at the digital clock on the stove and it said 10:41.
Excuse me?
For a minute I felt really guilty and weirdly anxious like part of the day had disappeared without any scientific reason but then I got over it and made pancakes.

After I came in from the garden I decided to do a little more embroidery and continue watching a Netflix documentary I started watching yesterday and so I did that. What I'm watching is called The Keepers and it hits all the really light-hearted and amusing topics like child abuse by the Catholic church, cover-ups by church and police, murder, recovered memories, women who are not believed, how the church and the police get away with that shit, and so on and so forth.
You'd think that as a survivor of sexual abuse I would not have any desire to watch things like this but you'd be wrong. It is incredibly validating to me, at least, to see other women who have experienced childhood sexual abuse and how we all share so many feelings and emotions, not to mention how these things affect our lives up to and until the day we die. And I don't find this documentary especially triggering because I know what happened to me and I know who did it and I no longer struggle with any feelings of guilt or shame about it. Of course, it took about a million years of therapy and going to a group for sexual abuse survivors to get here and of course, I'll never be what you might call "over it" and I'm sure there are still plenty of tangled roots and knots that I'm not even aware of and which I may never sort out but all-in-all, I think I have a pretty healthy awareness concerning the topic.
And I KNOW that every bit of information which comes out about how molesters get away with what they do is going to help. Education is the only answer because I am cynical enough to believe that there are always going to be monsters who prey on children.
And they are. Monsters.
And I also believe that the Catholic Church will never be able to redeem itself for what its priests have gotten away with for eons. It just won't. It has spread more evil than it could ever hope or pretend to provide in solace or salvation. There are not enough words in the world for me to say what I really think about that. And it's not just the Catholic church, of course. But I doubt any other religion in the world has ever been responsible for such vast cover-ups and releasing of known pedophiles back into churches to prey on other children.

My post on religion may still be brewing. Stay tuned. 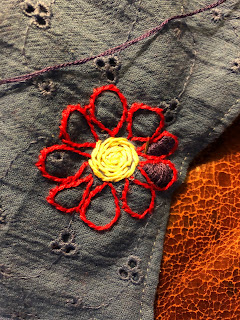 Here's the entire amount of embroidery I got done today. Okay, okay. Let me be honest. I did the center of the flower and one or two petal outlines yesterday.
Thank goodness I don't have to support myself with needlework. 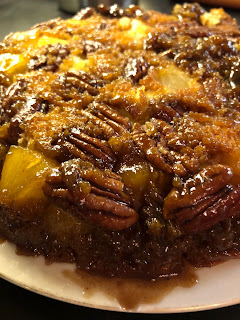 I would have more luck trying to support myself with cooking. That's a pineapple upside down cake that was merely a gleam in Mr. Moon's eye an hour ago. I was telling him what we were going to have for supper and he interrupted to ask if it would involve chocolate cake.
"No," I said. "But I can make you a pineapple upside down cake."
He said that would be fine and so I did. It's my ability to make things like this from whatever I can find in the kitchen which got me labeled as a goddess now and then back in the hippie-stoner-munchy days. Sure wasn't my ability to sing, play guitar, or dance like a wisp through the gloaming.

We got through another Sunday.
Phew.