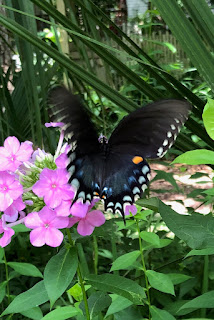 My pink phlox have just started blooming and the butterflies love them. That's a black swallowtail, I'm almost certain. It's a huge butterfly and even though that is not a good picture, I'm surprised I got it at all. They move so quickly.
Which, duh. They are butterflies.

Jessie brought the boys over today and I was so glad to see them. Lily had to work (sigh) and so it was just one daughter and two grandsons but it was a sweet visit. August was at the back door before I could get there from the porch when I heard the car door slam, ready to burst into the house to begin playing. Jessie said that at home he'd said, "I need some Mer lovin'" and when she told me this I asked him if he would like some Mer loving and he said, "No," and that was that. He wanted the dominoes out and his mama got them for him and set Levon down and quick as minute, that boy had pulled himself up. 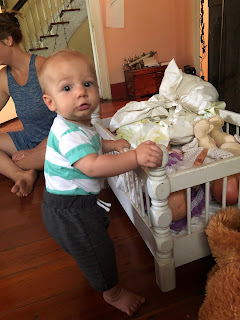 He spends so much time watching August and I know that he's trying as hard and as fast as he can to catch up to his big brother. He's such a good-natured little fellow. He smiles easily and he laughs a lot. And he's constantly on the move. He's like August in that he's not a big snuggler (Maggie and Gibson definitely win that prize) but he does give baby hugs and I got one from him today.

We all put on bug spray and went out to feed the chickens some Cheerios. And then August took off to see the chickens next door and we caught up with him. 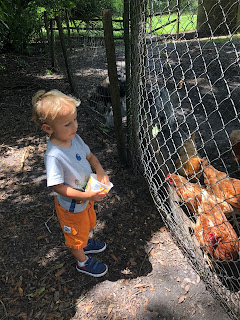 We asked if he'd like to give some Cheerios to the goats but he told us that he doesn't like goats.
I can understand that. Their eyes are a bit creepy and they have big teeth.
Even with the mosquito repellent we were wearing, the monsters attacked us and before we knew it August had run back to the house and was trying to get in the kitchen door.
Smart boy.
He impressed me greatly when we were reading a book and I asked him if a cat in a picture looked scared to him.
"No," he said. "He look nervous."
Nervous?
Well dang. The kid was right. 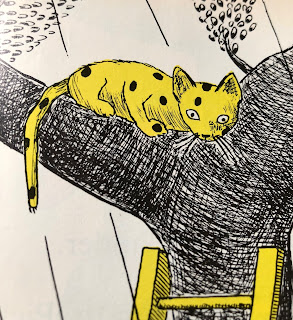 A cat who is nervous.

We had a little lunch although August did not want to eat much and before too long, Jessie decided to take those boys home to try and get them down for a nap. So everyone got loaded up and August got his going-away treat of chocolate which took away some of the sting of having to leave Mer's which he really didn't want to do.

After they left I started thinking about a book that I used to read to my kids and it must have been from the library because I don't have it. I could not remember the name but with the help of Google I quickly found it and ordered a used copy from Amazon. 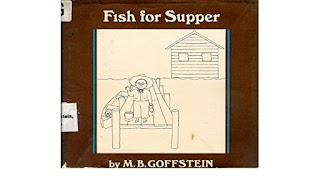 The story and the drawings are very simple. An old woman fishes every day until sundown and then she comes home and cleans her fish and eats it and goes to bed and gets up the next day and does the same. I'm not sure why I found it so charming when I used to read it to my babies but I think I probably still will. It's sort of Zen in its message of how easy it is to be happy doing what one loves to do.
Not everyone would agree with me, I suppose. For instance, here's a "review" I found on Amazon:

"Really short book with very few words. Pretty boring. It's only a few sentences spread out over all the pages.
My grandmother went fishing. She did X, Y, Z, and then at the end she went to bed so she could get up to go fishing the next day.
It's descriptive. The pictures are all line drawings, very simple, with not a lot of detail. There's also not a lot of detail in the story. Nothing's happening, really, except the day of a woman fishing, making herself food and then eating. That's it. This woman's life is very boring. She doesn't do anything, and she doesn't have any family or see anybody else. She just goes out and fishes."

And, speaking of fish for supper, I'm about to go and cook some red snapper that my husband brought home from the Gulf of Mexico yesterday. I can't think of anything I'd rather eat.

And oh! I must report that Mr. Moon proclaimed the coconut cream pie to be the best pie he ever ate. I tasted it and I will say that it is damn fine and that his enjoyment of it made every bit of the fussiness of making it completely worthwhile.

I used the recipe found HERE and I think it is a very fine recipe.