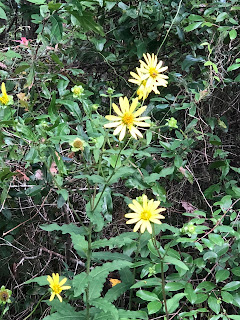 What a good day it's been! First of all, it's Jason's birthday and I can't say enough about how glad I am that he was born. Not only did he father three of my grandchildren whom I love more than life itself, but he is the very best father to them that they could possibly have. He also loves my daughter with all of his heart and soul and that makes a mother happier than anything on this earth.
We decided to meet up at the Indian buffet for lunch but before that I took a shortish walk, just enough to bring my total of miles for the week up to twenty. I am proud of that. I will admit it.
In this heat there is a lot of mind over matter involved in these walks and in so many aspects of my life, I feel no confidence in my mind or my matter (for that matter) and so simply putting my walking clothes and shoes on and heading out to White House Road is sort of a big deal to me.
And that's enough said about that.

After my walk I took a shower and met Lily and Jason and Lauren and Owen and Gibson and Magnolia June and Hank and Rachel at Persis Indian Grill where all of the smart people gather on Friday's for the buffet. I was greeted by Maggie who kissed me and hugged me. 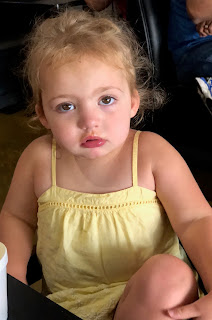 Those eyes. Those rosy lips. 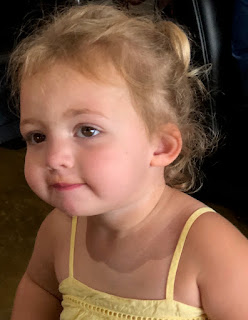 I know. I KNOW I'm prejudiced. But in my eyes, she is simply exquisite.

We all had way too much very, very good food. I never have the slightest clue about the names of the dishes I'm eating there but it's always good. Always.
And after lunch we went to the Goodwill book store, of course.
The only thing I bought for myself was the original album of music from the movie Camelot 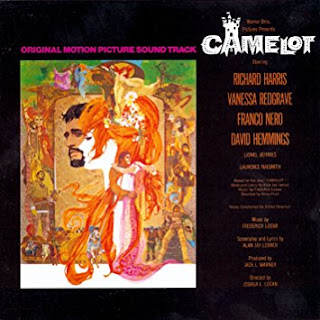 which I saw at a very impressionable age and cried my way through. I do not know who I fell in love with hardest- Arthur, Lancelot or Guinevere. They were all so very beautiful and the story was so very, very sad and romantic. And sexy.
Oh, Lord. No wonder I grew up with such odd ideas about what love is.
I still say it's a fabulous movie.

Phew. That was a weird segue.

I did buy the children books, of course, because that is the ritual and I also bought a copy of The New, Our Bodies, Ourselves, which I gave to Rachel because she'd never even heard of the book or the original and goddammit, every woman needs a copy of that. And I got her and Hank a beautiful vintage cookbook with luridly colored pictures of many foods as well as someone's handwritten menus tucked away between the pages. They are about to move in together and Rachel is a wonderful cook and Hank is a purveyor of old books in general. 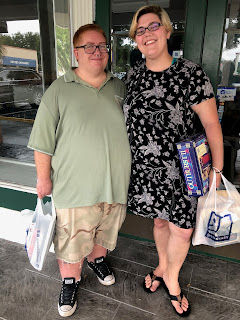 Rachel and Hank with their Goodwill booty. 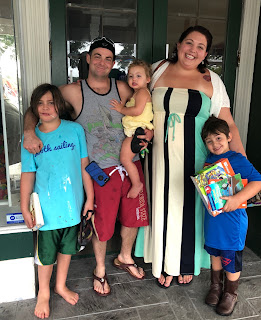 And the Hartmanns with theirs. Owen blew out his flip flop. Maggie just took her shoes off.

A few weeks ago when Jessie and the boys and I went to the thrift store downtown, I saw a beautiful old Singer sewing machine. Did I discuss this already? Ah well.
Mind and matter.
Etc.
It was in a cabinet, was not a Featherweight but was one of the cast iron machines. Yes, they literally made sewing machines of cast iron. 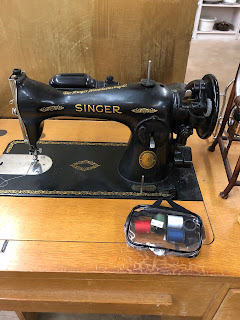 And I had not been able to get that dang thing off my mind so I went back today to see if it was still there, determined to buy it if it was.
And it was.
I sat down on a very uncomfortable piano stool set in front of it and began to really examine it. One of the things I truly loved about it was how when you flicked one of the levers, it made such a very sturdy "click" sound and felt tight and exact under my fingers. Obviously made to last through the Apocalypse. And you will note that it is threaded. It obviously needs new belts and electric cords and probably a few other things but that really does not cost too much. One drawer contained thread and machine oil 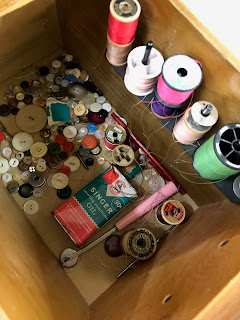 and buttons and in another were the original manual, the original Singer attachments and the original Singer buttonholer which were all tidily packed away in their original kelly-green boxes looking almost unused as well as the beautiful little screw driver that Singer sent out with all of their machines.
I think those were the things that made my heart clutch.

So. I thought about it. I looked at the cabinet. It had peeling veneer at the bottoms. I attempted to lift the thing off the ground but realized that it probably weighed about as much as a cement mixer or a sperm whale. Take your pick. And I thought about my precious little Featherweight machine which has proved itself capable of anything I've ever wanted to sew and I thought...aw, no. I don't really need this.
And I left it there.
But it sort of hurt my heart.
Someone will want it. Someone will come along and want that machine and will take it home and fix it up and use it for a lifetime.
I hope, at least.
And maybe now I can quit thinking about it.

Jesus. I have definitely said enough here tonight and I need to get supper started.

Pork chops, sweet potatoes, corn from the garden, and a nice salad.
That will do nicely.

A good supper after a good day.