And Lord, He Could Wear A Pair Of Levis 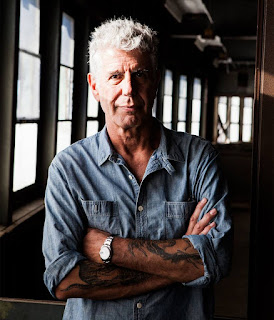 We always ask why. We want to know, why?
How could they? Why did they? What was so horrible, so painful that a beautiful mind felt the need to let go of it all, permanently?
And we never really know, do we?

Anthony Bourdain never seemed like the kind of guy who would keep such painful secrets.
And yet at the same time he seemed like exactly that kind of guy.
Still. His first book was all about the telling of the secret things that go on in the kitchens of restaurants. He didn't hold back. And he was like Keith Richards in the way that he absolutely admitted to past indiscretions freely. His years of drug use. His depression.

Which book of his did I read in which he described a massive depression he suffered not long after the first flush of fame came upon him? He described living on an island somewhere idyllic and drinking himself senseless every night and driving home on scary roads in which he flirted with the idea of death ceaselessly.
I don't remember.

But like Keith, it always seemed that he had the desire and the will and the ability to pull himself up and out by his art. People describe him as a "food writer" which somehow denigrates the actual writing but should not. And food was merely the platform from which he dove with his words. Proust may have had his madeleine but Bourdain had every food that humans can consume in his repertoire. And it was the humans who ate all those foods in which he was truly interested.
The humans and where they lived and how they lived and what sustained them, brought them sustenance and comfort, how they celebrated and what they ate when they did.
His shows were amazing. Yes, he went to fine restaurants and got into the kitchens and talked to the famous chefs but he was known more for sitting around a fire with people who have lived the same way for thousands of years, drinking with them, eating with them, trying to learn not how they were different from him, but how they were the same.

He was filmed drinking and drunk and hungover. He was filmed tripping on psychedelics. He was filmed almost nude and in shorts and flip flops. His face grew more graven and carved as the years passed and his face always seemed to reflect an eternal curious honesty. You could see fatigue there, you could see a sort of reserved merriment. You could see life. His stride continued to be long and his hips continued to be lean. He got more tattoos. He slurped noodles with President Obama sitting on a plastic stool in Viet Nam, he asked him if America was going to be okay.
He ate a patty melt and hashbrowns at the Waffle House.
He and his crew were trapped in a hotel room in Beirut while the airport was bombed a mile away. When he got safely home, he told his wife he wanted them to have a baby.
They did.
The marriage didn't survive but it seemed as if that child was the light and love of his life.
And part of me wants to be mad at him- how COULD he leave that little girl behind? And part of me just wonders how horribly he must have been suffering to leave that little girl behind.

Some celebrity deaths leave us, if not unmoved, then relatively undisturbed.
And some rock us. The deaths of people who have moved us, touched us, caused us to feel things, to see things, to experience something that no one else ever caused us to feel or experience.
For me it's the death of people who have always appeared to be the survivors. Who, against the odds (what a stupid phrase) did something with their lives that somehow changed everything. Or something.
But mostly us.

We may never know why you chose to leave the way you did but in the end, that's not our business. It was your choice and you made it.
Thanks for hanging out with us. You were a magnificent human being.

No reservations, man.
May you find peace in those parts unknown.