A Baby Step For Precious Babies

So, well, Donald Trump signed "something" which somehow stops the policy of separating families at the border and you know as well as I do that he had no idea what he was signing but he seemed to finally grasp that even tyrants can't get away with concentration camps for children.
For very long, anyway.
And let me say- I say his name. I speak it. I am not afraid to name this monster. Fuck that shit. I'm not superstitious. Okay, maybe I am but not about this. He ain't Voldemort and the utterance of his name has no magical powers.
Donald Goddam Trump.
And that's how I feel about that.

But now the questions remain of course on how we get these families reunited which have already been so cruelly separated and in what sort of facilities are the intact families going to be held?

This all remains to be seen but I have been heartened today by hearing an interview with a border guard who quit his job when he was told to tell some siblings that they were not allowed to hug each other.
"No," he said. "You can tell them that but I will not."
It is also heartening that Steve Schmidt, a prominent Republican strategist, has quit the party calling it "corrupt, indecent and immoral."
Article here.

Perhaps people are finding their souls and their balls. Of course some people have neither.
What in hell is Sarah Huckabee? She certainly doesn't appear to be human. Where do they find these soulless white bitches in the Trump administration?

So. Yeah. Things appear to be happening. Here in Lloyd what's happening is the heat. Sorry to repeat myself. I'm still just not used to it. 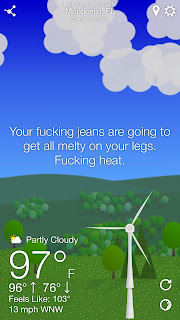 Anyone wearing jeans in this heat deserves to die.

Every summer it comes as a shock. We're not getting our afternoon rains to cool things off and I came to the absolute realization that walking five miles on asphalt, even on a mostly-shaded canopy road is tantamount to a death wish.
Really.
No.
I can't do it.
Not the seven miles, not the six miles, not the five miles. Today I think was the worst. Honestly, if there had been any way to get out of that last mile I would have done it. However, there was not and so I walked it and then I got in my car, turned the AC up to freezing, drank my ice water and drove to the Wacissa where I got out of my car, unloaded the pockets of my cargo shorts, walked to the water and dove in, full mermaid.
It was arguably the most heavenly experience I've ever had which did not involve a newborn. I could feel every molecule in my body screaming in profound relief and joy.
That may have saved my life.
I hung out a little while and sat in the cold water and watched kids jumping off the rope swing, listening to their bragging banter. One of the things I love about the Wacissa is that absolutely no one batted an eye when an old scarlet woman got out of a scarlet car and jumped into the water wearing all her clothes. And I wouldn't have cared in the least if anyone had.
What I was wearing was the least of my concerns. The fear of death by heatstroke (which is not funny) rated a lot higher.

And after all of that and coming home and eating my lunch and cleaning up a bit, I went to town to pick up a prescription and go to Joanne's fabrics which always triggers the hell out of my anxiety and I do not know why. I was determined to get a pattern and fabric to make Maggie a dress and after about four thousand hours, I finally managed to achieve that goal.
Also, while I was there studying the juvenile prints, my thighs suddenly appeared to burst into flames and I realized that I had forgotten to wear my Body Glide this morning on top of everything else. Why it took a couple of hours for my tender thighs to suddenly start to burn and hurt is a mystery to me but it did.

Here's what I picked in the garden tonight. 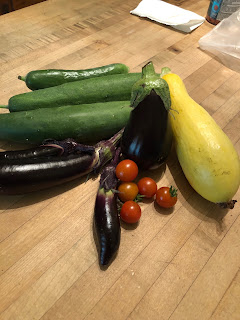 Not a very impressive harvest, eh?
Well, that's okay. I'm going to figure out a menu for tonight which involves some of those vegetables. 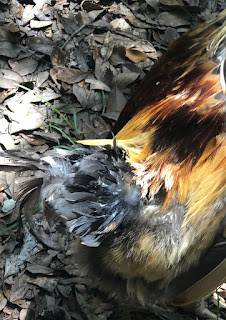 Look at those tail-feathers! Let's hear it for golden seal, the miracle and magical herb which all good witches should have in the medicine bags they keep tied around their waists made from the testicles of their enemies.
Mix it with a little Neosporin which they allow anyone to buy at the CVS and you won't even need to chant an incantation.
I promise.