How To Survive Summer 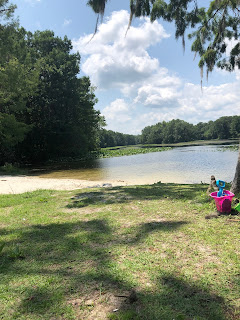 We made our first trip to the Wacissa today and it was heavenly. I really needed that cold water as I'd walked five miles and I have decided that five miles is absolutely my limit in this heat and I have also decided that if I don't get up earlier in the morning to get out there I am truly ready to be put in a facility because as I thought today on the last stretch of road which is a pretty steep hill and not very shaded, "I'm playing with fire here."
No pun intended but honestly, this is how people get heatstroke.
When I got to the river, there was no one in the water and only a few people there but by the time Jessie and Vergil had come in from a little kayak trip and Lily and her kids got there, the water was filled with children playing. A local woman whom I recognized showed up with her kids and she has at least nine or ten of them. I'm not sure of the real total but at least that many. And I have to say that those were the most well-behaved kids I ever saw and all she had to do was to tell one of them what she wanted done and it was done. No arguments, no fussing, no whining, no fighting.
I guess if you have that many kids you HAVE to be in charge.

It was so good to see Owen and Gibson. I hadn't seen them in forever. I talked to Owen and said, "Hey, I've been trying to think of things we can do together this summer."
"Well," he said, "I'm pretty sure that Boppy has a lot of fishing planned for us."
Is he telling me that he'd much rather be fishing with his Bop than doing anything with me?
Why yes. Yes he is. But that is okay.

I have decided that Maggie is the cutest little girl in the world. No ifs, ands, or buts about it. Here's a picture I took today. 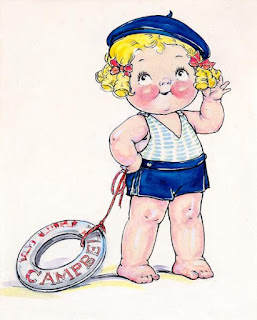 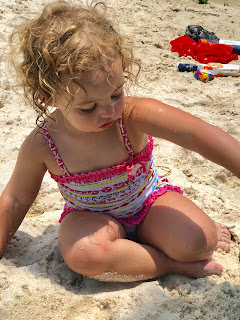 She is way cuter than the Campbell Soup girl. Not a very good picture and way too much shade but it's so hard to get these littles to pose for me.
Here's August sitting on a rock. Again. He would not pose.
I asked him if he'd seen any alligators on the kayak trip and he said that yes, they had. Any manatee? No. Any birds? Lots!
Vergil confirmed this report.

We played in the water and mermaided in it and shivered and squealed and August wanted to jump into the river via the rope swing so bad. He really just is not ready for that yet. Maybe when he learns to swim...
But Vergil did jump into the water off the platform with August on his shoulders which made the boy incredibly happy.
We all had a good time, even Levon who loved and didn't love the cold water. I think he loved it more than he didn't love it. He didn't cry or fuss about it but he did make some funny faces. Maggie is becoming a little fish and Owen and Gibson already are. Their other grandma has a real pool and they get to spend a lot of time in it. August is going to be taking swimming lessons this summer which is a good thing for a child in Florida. Or anywhere, for that matter.

So it was a perfectly perfect summer afternoon and we had crackers and chips and guacamole and sandwiches and edamame beans and apples. The only downside was the fucking horrible evil mean terrible yellow flies. I managed to kill two, one full of blood, but still have a fat ankle from one particular bite. I don't think I react quite as much to them as I have in the past but it's still a terribly unpleasant experience. 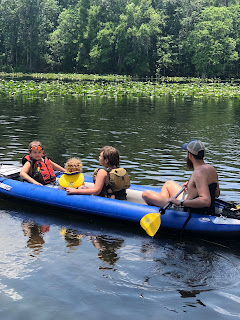 Hurray for Uncle Vergil! He even took Owen out to see some alligators after Gibson and Maggie got dropped off back at the beach. They did not particularly want to see alligators. I hear it was a successful trip. There seem to be an awful lot of alligators on the river this year. I have no idea why.

And there you go and there you have it. The Official First Wacissa River Trip of 2018 and we all lived to tell the tale although August did fall off a small rock which he was climbing and which somehow rolled over his arm and pinned him to the ground. His father had to free him. Thankfully, he is fine with only a few scrapes but it scared the hell out of him and he cried and cried. It could have been so much worse. And now he knows something he did not know before about climbing on rocks. The best lessons are the most painful, aren't they?

For all of you who have been asking about Mick (and thank you) I am happy to tell you that he is doing quite well. He is, as we in the nursing profession say, able to perform his activities of daily living. Yep. His ADL's are coming right along. Walking, crowing, scratching, keeping up with the hens, getting up on the hens, and he is able to fly up to his roost nest every night where the young Jungle Fowl like to huddle up together behind him.
Have I already told you that?
Well. Whatever.
Here he is. 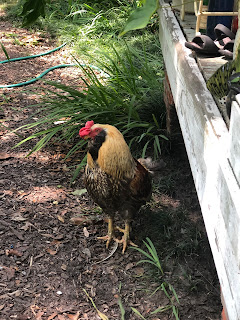 His backside still looks like hell but not raw or infected. Just bare. He does still have about two smallish tail feathers so he can shake them if the need arises.

We should all have tail feathers to shake if the need arises. Or the urge. Or simply a passing fancy.
You know what I'm talking about.