From The Sublime To The Gloriously And Grossly Ridiculous 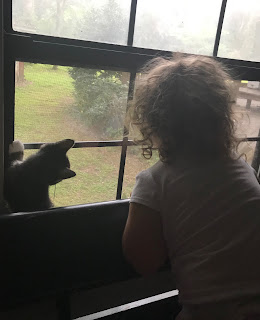 Magnolia and Bella, waiting for the rain.
Photo taken by Lily.

Nothing today. Just nothing. Watching my country crumble, watching our worst nightmares unroll even unto the highest court in the land.

I took a walk. It was hot. Of course it was hot. It's fucking summer in Florida.

I came home and finished Maggie's dress. I am not happy with it but it's done.
It's cheerful. 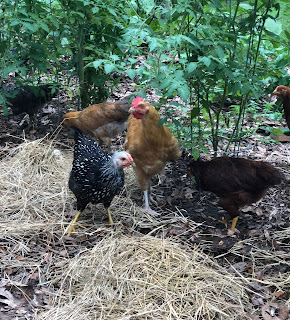 The young chickens have found their way into the garden and good for them! They love to scratch in the hay I've cleaned from their nests, finding nice bugs and spreading out the poop and the mulch for me. I picked two embryonic Italian eggplants, a bell pepper, a green tomato which had a big bug spot at the top, some basil, and some volunteer arugula. Everything but the arugula has already been sauteed along with onions and garlic and mushrooms to make a garden medley pasta sauce with chicken.
Garden medley.
It's that time of year.

I feel frantic tonight. I don't know why. I had the most horrible dreams last night and every time I went back to sleep, they returned like a remake of some terrible horror movie, the characters the same, the storyline always a bit different but monster people who looked just like suburban neighbors killed my baby by drowning and I would not let her go, but held her tight to me. When I woke up, I was clutching my hands hard together under my chin where I'd been holding that dream baby. I am not kidding when I say all night. I woke up from the first one and reached to find my husband, just to make sure he was there, and checked the time and it was 2:18 and when I woke up with my hands clasped so tightly, it was a little after 7:00 a.m.
Perhaps all of that was the seed of my emotion.
Perhaps.

I am wracking my brain to come up with something else to write about to no avail.

My sock monkey socks which I ordered online came in the mail today.
There was a horrible fire which arose from a controlled burn in the tiny town of Eastpoint which lies west of here and which we pass through on our way to the beach or Apalachicola. Thirty homes, at least, were completely burned. The people who live in Eastpoint are mostly fishing people, oyster people, people who were barely making it as it is. There's nothing to rent in Eastpoint. I could think about them and try to assure myself that hey! I have it good! which I do but this immense loss only makes me feel worse.
No one died. It's a miracle.
The Beauty Berries are blooming and will be making their gorgeous fuchsia colored fruit soon.
The Clitoria vines are blooming.
The Rolling Stones played in Marseille last night and one of the headlines from a local paper read, "Infatigables Le Rolling Stones enflamment la stade Velodrome."
I don't know much French but I think I can understand what that says.
My husband and I have been watching a Canadian mockumentary series called Trailer Park Boys which goes on for about ten thousand seasons and it's stupid and ridiculous and it makes us laugh every night as we eat our supper and I wish I'd kept a pen and a pad of paper handy for the whole time we've been watching it to capture some of the dialogue because it is genius.

I'll leave you with these immortal words from one of the main characters. 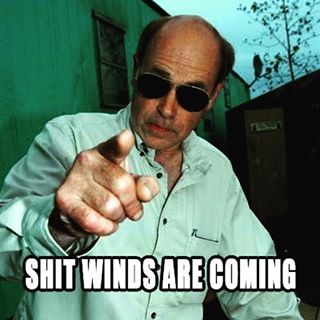 Wish I didn't believe that was true.