First things first, here's a picture of the Body Glide which I use to prevent chafing while walking. 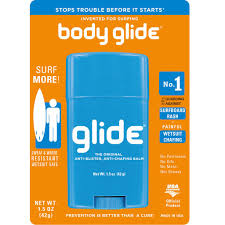 It works quite well if you remember to use it.

Secondly, is anyone getting email notifications of comments from your Blogger blog? Because I'm sure not and it's annoying.

Third- this is me:

I almost feel as if I should make that my permanent header.

So. Another day, another opportunity for Donald Trump and/or his minions to do something which none of us can believe. And when I say "us," I mean people who think as opposed to people who gave that shit up a long time ago.

Today was his wife's day to do something that absolutely no one either understands or can believe.
I almost Snoped it when I first saw it.
I'm sure y'all have all seen this but here you go. 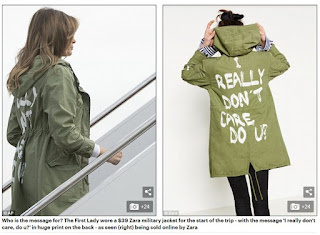 That's Melania on the left wearing the jacket you see on the right. She was on her way to visit a detention center in Texas.
Fuck me, Jesus. I really don't even know the questions to ask about that.

We haven't discussed the Space Force Trump wants to build. Create? Whatever. We can't afford to deal with Flint's water or Puerto Rico or provide universal health care or decent public education but goddammit! We gon' be the most powerful Space Force in the whole world!

Beam me up, Scotty. I can't deal with this shit.

The bottom line here is that obviously, Trump has lost his fucking mind if he ever had one. I'm pretty sure he never had soul but he may have had a defective sliver of a mind at one point.
That's gone.
I feel like I've asked this question a billion times but WHAT DOES IT TAKE TO GET HIM OUT OF OFFICE?

Hey. I think it might be raining. Yes. Yes it is. Not much. But it's something.

I've spent the entire day in Lloyd. Didn't even go for a walk. I've been working on a dress for Magnolia June and you know I love doing that. 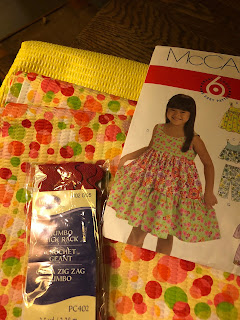 I got a very short but sweet visit from Jason and the kids today. Maggie was wearing a dress I made her last summer and it was so cute although she's about to grow out of it. Gibson walked into the kitchen and said, "Mer, can I have some pickled okra?" and I made the mistake of leaving the jar out on the counter and he ate all but one. I believe Owen helped him.
It wasn't a big jar but it was the last jar.
Owen wanted to go see what was growing in the garden and so we did and as usual, the first thing Maggie did when she got here was to go and wake up one of her dollies.
Owen's going to camp in a week or so and tomorrow we're going to go camp shopping. It's a camp for kids with epilepsy and I'm thrilled he'll get to go. They do all the usual camp stuff but he'll finally get an opportunity to talk to kids his own age who have seizures too. Not that he's had any in a long time but we know that if he stops taking his medicine, he will, and he's aware that he's had them and could have them again and they must seem so mysterious and weird to him.
I love that boy so much.
He's going to be as tall as I am before next year. I swear he is.

That's been my day. Fretting and sewing and feeding chickens and also I made a chess pie. I had some pastry dough leftover from when I made the coconut cream pie and it was use-it-or-lose-it day. That's such a stupid excuse for making a pie.
Do you know what a chess pie is? It's a pie made with eggs, butter, sugar, a tiny bit of cornmeal, vinegar, and vanilla.
Period. The end.
And it's just a little bit of heaven.

Koko died today. I'm sad about that. She was forty-six and I take it that that's a ripe old age for a gorilla. She was definitely a celebrity and she stole all of our hearts at one time or another and taught us a lot we did not know about gorilla intelligence and ability and emotions. She also met a lot of celebrities but still, her life made me sad because she never got to live in the wild and no matter how much she was loved and well-tended, she did not live the life she was truly born to lead. And she was never able to have babies although she appeared to have an abundance of maternal instinct.
Well.
Bless her heart. As a human being I feel so incredibly honored to be related to the great apes. I'm pretty sure that they don't feel that great about being related to us as we do everything we can to completely wipe out their natural habitats and indeed, their complete various species with our human greed and unconcern for anyone and any thing not of our tribe.

One last thing- I got to talk to one of my oldest friends today on the phone. Actually, I guess she IS my oldest friend. We met in the sixth grade so, yeah.
We spent most of the time talking about how much we hate Trump and how we cannot believe that anyone could be so purely evil and how anyone could possibly support him.

It smells of rain and wet dirt, and thunder is rolling across the sky and shaking the very earth.