I Don't Know What We've Become 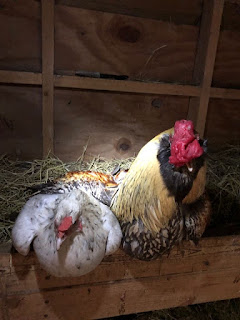 Last night when I went to close the hen house up after the usual head count, this is what I found and I swear- I almost died with the love. Remember when Mick used to put his wing over Trixie at night? I haven't seen him do that cuddling since she died but last night, he had Darla cuddled up next to his side and it was not for warmth. In fact, the thought of sleeping in that hen house with a feathered wing flung over me sort of makes me want to die but then again...the sweetness.

Let's talk about my new header photo. Someone posted it on Facebook along with this poem:

Homeno one leaves home unless
home is the mouth of a shark.

you only run for the border
when you see the whole city
running as well.

your neighbours running faster
than you, the boy you went to school with
who kissed you dizzy behind
the old tin factory is
holding a gun bigger than his body,
you only leave home
when home won't let you stay.

no one would leave home unless home
chased you, fire under feet,
hot blood in your belly.

it's not something you ever thought about
doing, and so when you did -
you carried the anthem under your breath,
waiting until the airport toilet
to tear up the passport and swallow,
each mouthful of paper making it clear that
you would not be going back.

you have to understand,
no one puts their children in a boat
unless the water is safer than the land.

who would choose to spend days
and nights in the stomach of a truck
unless the miles travelled
meant something more than journey.

no one would choose to crawl under fences,
be beaten until your shadow leaves you,
raped, then drowned, forced to the bottom of
the boat because you are darker, be sold,
starved, shot at the border like a sick animal,
be pitied, lose your name, lose your family,
make a refugee camp a home for a year or two or ten,
stripped and searched, find prison everywhere
and if you survive and you are greeted on the other side
with go home blacks, refugees
dirty immigrants, asylum seekers
sucking our country dry of milk,
dark, with their hands out
smell strange, savage -
look what they've done to their own countries,
what will they do to ours?

the dirty looks in the street
softer than a limb torn off,
the indignity of everyday life
more tender than fourteen men who
look like your father, between
your legs, insults easier to swallow
than rubble, than your child's body
in pieces - for now, forget about pride
your survival is more important.

i want to go home, but home is the mouth of a shark
home is the barrel of the gun
and no one would leave home
unless home chased you to the shore
unless home tells you to
leave what you could not behind,
even if it was human.

no one leaves home until home
is a damp voice in your ear saying
leave, run now, i don't know what
i've become.

I had never heard of Warsan Shire but it turns out that she is a British poet who was born to Somali parents in Kenya.
Here's an article about her from the New Yorker.
It was in an issue from 2015 so the odds are good that I did indeed read it but of course, have forgotten. But I wish that every ignorant, racist asshole who claims that "illegal immigrants" who try to enter our country to suck the tit of the Big American Eagle Good Life Without Earning It deserve whatever happens to them up to and including having their babies snatched from them (that'll teach 'em!) could be forced to read this poem over and over until they get a molecule of understanding and empathy.
If that's even possible which I doubt.

And the picture? That stunning picture which says everything? It was painted by Kelly Latimore, an iconographer.

I do not have the words within me to express how I feel about children and parents being separated. I just don't. The people who came down with this decision and the people enforcing it and the people who defend it are simply evil. There is no other word which comes close. There is absolutely no justification to this. None. The inborn necessity of a parent to take care of and protect their young is so strong that we humans cannot even claim unique possession of it. Creatures throughout the entire animal kingdom will fight to the very death to prevent their offspring from being taken from them. And to randomly and with malice do what is being done on our borders is the very definition of cruelty.
And evil.
I can't even bring myself to talk about what this must be doing to the children. I feel like if I did, my soul would rip apart.

So. That's the story of my new header.
I have done a terrible job of trying to say what I wanted to say here tonight but look- see that rooster, holding one of his wives close? She is part of his family. And he almost died protecting her and the other hens.
Chickens. Chickens. Domesticated birds which we rationalize eating by thinking that they have brains the size of a pea and no feelings or emotions.
I've seen a mother hen and the way she reacted after a hawk took her baby and I will never forget that.

This is truly how Hitler acted but we do not have the excuse that "no one knew" because yes. We do know.

The whole world is watching.

May we not die in shame before this situation ends.

Call your representatives. Repeatedly. And refuse to let anyone tell you that there is one thing defensible about this. Because there just isn't.