Friday. And You Know What That Means! Clean Sheets And Martinis!

Got a text from Jessie this morning that August was running a little fever and had complained of his ear hurting and some of his lymph nodes were swollen and tender (it's hell having a nurse for a mother) and so she'd made an appointment to take the little guy to see the NP at the doctor's office. Of course she was second-guessing herself within the hour because he seemed to be feeling better and said his ear didn't hurt any more but as every one of you parents know, these things ALWAYS happen on a Friday and earaches always show their true raging presence at two in the morning.
So she took him in and dang if he didn't have an ear infection and so he's on amoxicillin. His white blood cell count was quite high and his little ear was red inside.
But I think he'll be fine and here's a picture of the sick child having an ice cream cone to soothe his woes and pain. 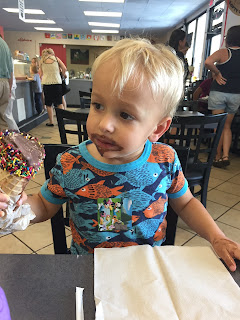 Jessie said he refused to even let her try a bite. The darn thing's as big as he is.

I'm not really feeling that well either to tell you the truth. My throat's still a little sore, I have a cough and a whole lot of snot. And not much energy.
Lily reports feeling the same. Here's a picture she sent of her drinking tea with little Bella, the kitty that Jason saved. 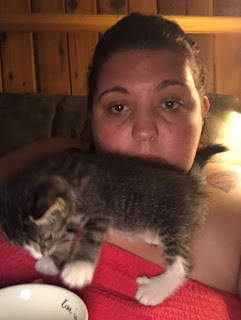 Bella looks fine. Lily looks a bit miserable.
Great way to start out summer but what can you do?

Anyway, I determined to take it easy today and mostly did but not really. You know me. I washed sheets and hung them on the line and picked up a bunch of downed branches in the front yard and cut back some of the horrible thorn vine which I have no doubt is the spawn of Satan. I pulled up the rest of the pea vines and fed them to the goats and chickens next door.
And then I did something I really hate doing which is dusting and I also cleaned the mildew off of the door frames in the hallway, neither task being that onerous but I can't help it- I hate cleaning. I just purely hate it. I don't know why. So mostly I don't do it. I would so much rather work outside in the yard or garden even though that is way more physically taxing. And in this heat, possibly deadly. I'd say that it's because house cleaning is never truly done- as soon as you get something dusted it begins to collect dust again- but neither is yard or garden work. Get that garden weeded, go in to get a drink of water, come back out and the dollar weed will already have snaked its way through the cucumbers while your back is turned. Pick up fallen branches and haul them to the burn pile and within a week the approximately eight thousand trees on this property will have dropped another ton of them.
I don't know. And I don't hate everything associated with housework. I don't mind sweeping or doing laundry or making the bed and I love to cook for the most part but ask me to clean a shower or a toilet or mop a kitchen floor or GOD FORBID! clean a baseboard and I'll politely tell you to go fuck yourself.

I really do need either a cleaner or a Roomba. Or both. Because I do like the way a tidy, clean house looks and smells. And I do manage to mostly keep things fairly neat. I certainly never leave dirty dishes in the kitchen or stuff strewn around but it's the actual cleaning that I hate. The very words deep cleaning make me sort of want to die.
The only time I've ever truly kept a house spotless was years ago when there was nothing in my life I could control except for the spitshinyness of every surface in that house and what I ate so I had a very clean house and was very thin.
Not healthy. Not healthy in the least.
But man, you could eat off my floors. And I could buy my clothes in the little girls' department.
Looking back, it really wasn't worth it.

Good Lord! What was I talking about? Oh yeah. Not feeling that well but getting a few things done and how much I hate cleaning. And August having an ear infection.

So it's Friday night and Mr. Moon is slinging mud as he says, which means he is laying tile, and I'm about to make some chicken quesadillas and guacamole for our supper.
We're having martinis. Mr. Moon is enjoying being off of his antibiotics and his stomach is finally getting back to a bit of normalcy.

The little chickens and the big ones are blending nicely. I saw some of the young ones pecking peacefully right beside Mick today which made me so happy. Mick was able to get up into the roost last night which is definitely a good sign. I'm not sure he'll ever grow his tail feathers back but time will tell.

Meanwhile...where is Melania?
Something ain't right and we all know it.