What Can You Do? Plus, Circle of Life, GIRL! 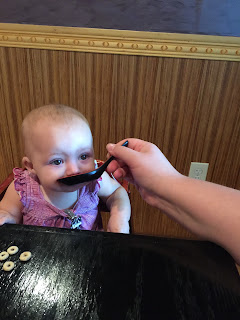 Well, life continues on. This morning I was making smoothies and toast for the boys and Boppy when OUR POWER WENT OUT AGAIN and I thought, well, just kill me now. Do it. Fuck me, I already feel like shit.
I knew it was just a regular Jefferson County power outage. We probably got another three inches of rain last night and there was no doubt that a storm-loosened branch or tree simply fell with the extra water and took down a line but shitfire, Martha.
You know.

Anyway, Lily and the kids and I went over to their house and there wasn't a power crew in sight nor was there power but there were millions of mosquitos, just hatched and hungry as fucking fuck but they're here in Lloyd, too. We all live in a swamp or right next to one and that's just the way it is.
Lily and I cleaned the meat out of her deep freezer which hadn't started to stink yet, and then she had to bury Magnolia's placenta which had been bagged and frozen for future planting under a magnolia tree but it had thawed out and so had to go into the ground and the funny thing about that is that Lily's placenta which I had frozen and saved to plant under a rose bush had to be buried after Hurricane Kate in 1985.
So. Ritual. Of a sort.
Mr. Moon texted that the power here had come back on and I thought perhaps I'd go ahead and live and we decided to go eat at Japanica because why not? I wasn't even wearing a bra. I didn't feel like putting one on this morning and so I didn't. Fuck it.
Story:
Last night Owen asked Lily who was wearing a fairly low-cut top why women wore such things which showed part of their boobs. She replied that women just did that and it was called "cleavage."
"That's gross," he told her and she said, "Well, I nurse your sister all the time. Is that gross?"
"No!" he said. "That's just the Circle of Life, GIRL!"
So now around here boobs are being referred to as the circles of life and I find that fitting and so today my circles of life were untethered and so it was. No one looks at my boobs anyway.

We did indeed go to Japanica and Maggie had her first miso soup and she liked it. She's not feeling very well and appears to be running a little fever. She's not fussy but she's being pretty darn laid back and not what I'd call "listless" but maybe a train stop away from listless or maybe two. Jessie reported that August puked twice last night and had diarrhea this morning but appeared to be in good spirits, nonetheless.
Good Lord.
After lunch we went to Publix and as the time went by, my own whatever-it-is-I-have started to come on to more of a full bloom and I felt pretty shitty too but we got the groceries and came on home and after I unloaded everything and put everything away, I took some Ibuprofen and then had a little lay-down with a nap and now I feel pretty good.
We're going to have another feast tonight and there's an FSU game on the TV which I don't give a rat's ass about but other people seem to (men). Everything is fine and Hank and May both have their power now and feel lucky because lots of people in town still don't.

The people who appear to be the least upset about this entire situation are Owen and Gibson. They've made it quite clear that moving here permanently would make them happy. 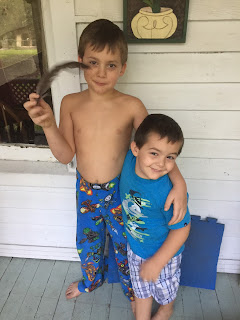 They feel right at home, as well they should having been partially raised here and it would appear that sleeping in the library is about the best thing ever. Owen dreamed last night about a chicken who was pecking holes in the earth which was world-threatening and he had to drown the poor bird in the blow-up swimming pool and he seemed to be pretty excited about that. Of course the power outage repairs have become politicized already with people claiming conspiracies about whose neighborhood has electricity and whose hasn't and our mayor has been falsely accused of refusing help from other counties and state crews and it pisses me off because the man is doing a Herculean job, coordinating the efforts. Article here.
You might want to check that article out because I think the mayor, Andrew Gillium, is going to be someone whose name we all might know in a few years. I respect the hell out of him. When same-sex marriage became legal he and his wife made a statement that there would be no obstruction in the county courthouse of Leon County and that love was love and any Floridians who were having problems with their own backassward counties could come to Tallahassee to get hitched.
Meanwhile, our governor, Prick Scott made just about the stupidest statement I've ever read concerning the situation which was:

Scott said he would not be satisfied with Tallahassee's progress until power was restored to every home and business.
"I think I would like to have 100 percent restoration," Scott said. "I am consistent with what I want."

Which makes him sound consistent with what he is which is a fucking alien.
Give that man the DUH AWARD for 2016.

So it goes and so it is and I feel so bad for the people who are still powerless. We'll all get through this and one day we'll look back and talk about it and say, "Oh yeah. I remember that."
Maybe Lily will tell Magnolia the story of how she had to bury her thawed-out placenta just like her mother had had to bury her own thawed-out placenta and maybe we'll smarten up and get those things in the ground under a tree or a bush before that happens or maybe we'll all be on solar energy by then and won't need no stinking electric companies but I doubt that.

Meanwhile, it is cooler today and feels a bit like fall coming and I have to say that it feels pretty good to tuck my grandsons into their temporary beds in the library at night and know that they're safe and sound and comfortable right here. Plus, I force them to let me read them stories and although they don't appreciate this much, I enjoy it.

I think I'll go make some coleslaw. It's a party here every night and as such, it is time to get this party started.