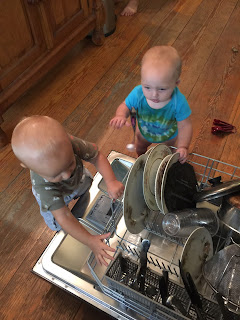 Yesterday was a busy, busy day and Jessie and I held down the home front while Jason and Lily worked and then Jason got off work but Mr. Moon dragged him and Vergil out into the woods to set up a deer stand or something and I felt so bad for Jason because he'd been at work since 6 a.m. and the last thing he needed or wanted to do was to hike through the hot, muggy woods hauling a deer stand and Vergil had done yard work all day as had Mr. Moon himself and sometimes I do not understand that man but it's too late to worry about it now, I suppose.
Plus, August and Maggie helped with things around here, as you can see.

One side of my throat yesterday hurt like hell and I wasn't sure if it was me getting sick or, more likely, my anxiety producing a life-threatening psychosomatic illness for my mind to play with like a cat playing with a bird and so (only those of you who have issues like this will understand), when I woke up this morning with a cold, I felt almost cheerful and relieved. No! I am not dying. I only have a cold! Sure, I feel like shit. So what? I have a cold!

Anyway, we had a feast last night when the men finally came home from the woods and then Jessie and Vergil and August went home to their powerless house and I made nests for the boys in the library and tucked them in. They were exhausted. Owen looked at a snake book and I got to read Gibson one of my very favorite books- The Relatives Came by Cynthia Rylant- and he hooked his arm around my neck as I laid beside him as he's been doing since he was a baby. That is one sweet boy. And they fell asleep as soon as I turned out the light and Jason got Maggie in her pajamas and held her until she fell asleep and then he tucked her into the pillows beside him and he fell asleep too. 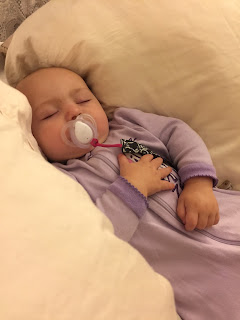 Mr. Moon fell asleep in his chair and I got in bed and read until Lily got home and then I went and woke up my husband and told him to come to bed and we all slept fine in the sweet, blessed air conditioning.

Jason had to get up early to go back to work (that man!) and Mr. Moon got up with the boys far earlier than Lily or I got up but when we were all awake, I made pancake batter and Mr. Moon cooked bacon and Lily made the pancakes. Owen and I let the chickens out. 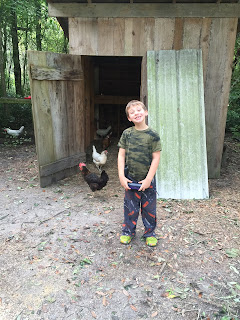 Breakfast was eaten and it was delicious. 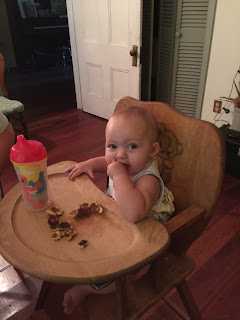 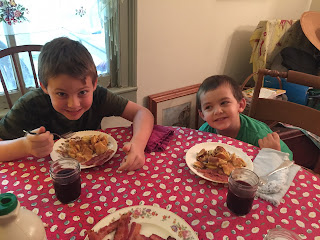 Lily's going to run back to her house to feed the cats and see if the power has miraculously come back on and I am going to take it easy today. I hear that a great many Tallahassee residents still don't have power but that more and more are getting theirs turned back on every day. I believe Hank may come out to use our wifi for his writing trivia needs and to bask in some AC. Jessie reports that they can hear the power crews from her house. I have not spoken to May today but I did yesterday. Unbelievably, the restaurant where she works did not lose power or at least got it back on very quickly and so she had long, long shifts both on Friday and Saturday serving very cranky people.
She and Michael do NOT have their electricity though.
Lord.

Still and all, I shudder to think of what would have happened if Hermine had started forming into a hurricane in the Gulf earlier than it did and continue to remain grateful. Of course, it's pretty fucking easy to feel grateful when none of your trees fell and your house is cool and you have plenty of food and library books and darling grandchildren and a family with good men in it, strong and resourceful, even if some of them are a bit obsessed with hunting.

Off to go be lazy.