Despite And Then, Because 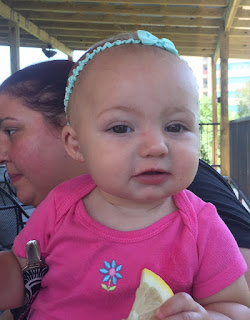 Despite a delicious lunch at El Patron with that little peach dumpling and her mama and her brother and her Uncle Hank, 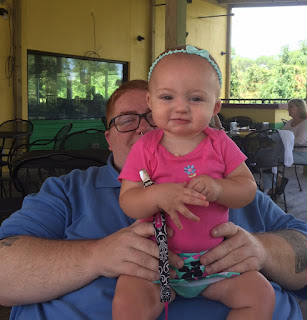 and despite the fact that I went to the Dollar Store and bought four nylon scrubbers that I like for one dollar along with a spatter screen for cooking bacon for one dollar and despite seeing Togi and getting three beautiful hugs and despite the fact that I have everything in the world I could want up to and including over four months of sweet and delicious anticipation of a trip to Cozumel and despite the fact that I am the luckiest woman in the world...
I am sad.
I have the saddies, as my Sue used to say and I think it's because my sweetheart, my husband, is about to leave for two weeks in Canada which is so very far away and I will miss him.
Oh, y'all. It never occurred to me as a child that I'd one day be married to such a good man and for so long. My own papa was such an evil drunk, although when he was sober he was nice, I guess. I hardly have any memories of him at all and most of them are not something one really cares to revisit. My stepfather was just a human being that quite frankly, the world would have been better off without except that he fathered two sons whom I love but between him and my real father, I didn't grow up with a very positive attitude about marriage or husbands or families, either, to tell you the truth. Sort of a torture chamber where the young were kept imprisoned until the holy high day when they could step outside into the real world and make their own sins and mistakes.

But. Here I am, almost thirty-two years married to this man who sometimes drives me insane, as I am sure I drive him insane, but he is, at the heart and soul of it all, well- he is my heart and soul.

And hell. I'll just miss him when he's gone. And let's face it- we are coming to an age where one of us will be leaving for forever at some point and if you think that age makes you somehow more able to conceive of that, to be more accepting of it, well then, just go ahead and live about twenty or thirty more years and get back to me on the subject.

He's just such a good man. And I can live without him for two weeks, without a doubt. I've done it many times before and it's not so bad. I like my solitude and I have all my young-'uns to keep me from isolating myself too much and I don't feel afraid to be alone at all and it's an easy time of it to cook and take care of only me but still. I will just miss him.

It occurred to me today as I wondered why I can't kick this virus, that every time that he goes out of town for awhile I get sick. This is just the way of it. I am not quite myself if he is not around.

Well. I'm going to get three or four new baby chicks next week and that will give me something to look forward to, to tend and take care of. And maybe I'll have the boys over for a night or two while their grandfather is gone and spoil them a little bit. Give me an excuse to make pancakes.

There are lots of things I could do and maybe I will and it will all be fine.
And maybe acknowledging all of this will help me feel better.
We shall see.

We're going to finish up the soup tonight and I'll heat up the bread I made too. He will ask me, as he always does when I'm getting supper ready and on the table, if he can help me. I never need help but I appreciate his offer every time he makes it. And he'll thank me for whatever I serve him because he always does that too. And frequently, he cleans up the kitchen when we're done.

A good man is hard to find, they say.
Well. I found one. And I've held on to him as best I could and I know that sometimes I have to let him go off to do what he does because that's part of him knowing that I love him.
Which I do. So very, very much.