I knew I had to get out of the house today and so I texted Jessie and Lily to see if they wanted to go see May where she works for lunch and figured I'd ask Hank, too, if they could go but Lily had to be at work at two and between picking up Gibson at noon and getting ready to go in for her shift, she didn't have time, so Jessie and I met up at her house and we did go to lunch, but not to where May works, although I think that tomorrow Lily and I will do that and so hey- Hank! you wanna go too?

For once, when Jessie said, "Where do you want to eat?" I knew exactly where I wanted to go which was a local restaurant which has Greek and middle-eastern food and so that's where we went. I've been thinking lately about a restaurant that used to be in downtown Tallahassee one million years ago, and I do mean one million years ago. I first went to it when I came to Tallahassee with my Girl Scout troop in 1968, I think, although it could have been earlier. Angelo's was the name of the place, and my best friend Mary Lane and I split a plate of spaghetti, probably the cheapest thing on the menu.
I remember.

When I moved to Tallahassee in 1974, Angelo's was still exactly right where I'd left it and I ate there sometimes when I felt flush enough to go out. Angelo was Greek and his menu reflected that. There were some seafood dishes and some meat dishes, the side salad always came with the "Greek Trim" which was feta cheese (and plenty of it), peperoncini's, Greek olives. Angelo made the best blue cheese dressing in the world if you wanted to deviate from the Greek dressing which was mighty fine too. There was always what was referred to as the businessman's luncheon which was available all day and all night and varied day-to-day. There were steaks and chops and shish-ka-bobs and stuffed grape leaves and grouper Greek style and half a baked chicken and the very, very best thing ever- snapper flakes au gratin.
At some point, Angelo moved his restaurant down and over a block and the place grew a bit fancier. No longer just a cafe but a full-blown restaurant with blue upholstered seats and booths, real napkins, tablecloths, finer glass and table-ware, but Angelo's wife, Margarette (and I could be spelling her name incorrectly, I probably am) still ran the register when his son or daughter weren't and he himself was usually to be found sitting at a booth right near the door, reading the newspaper with his glasses down on his nose. He'd look up and greet you with a grunt. I never really saw Angelo smile, to tell you the truth, but Margarette more than made up for it with her graciousness, her friendly smile. The new place may have been a fancier restaurant but the menu stayed essentially the same and the businessman's luncheon was still there, every day except for Saturday. And Sunday, when they were closed.
You could keep a tab there. We did.
After Angelo got sick and then died, they closed the restaurant and I'm still heartbroken. Margarette and her son opened a place on the north side of town and we went there sometimes, but it wasn't the same. It just wasn't.
But I've been thinking about Angelo's and how lovely it was to walk into a restaurant and be greeted by name and with hugs, with smiles and with servers who knew us, who would spread out a tablecloth underneath the babies' highchairs, who would sometimes snatch up the babies themselves and carry them off to the kitchen to show them off. Who knew what we wanted on our salads, what we wanted to drink, our names, the names of our children.

And the food. The falling-off-the-bone baked chicken with the delicious rice, the tender rib-eye when that was on the menu. The pastitsio, the eggplant cooked with tomatoes and onions and olive oil, the grape leaves, the perfect grouper, the bacon wrapped, crab-stuffed shrimp, and as I said- the very, very best- the snapper flakes au gratin which was thick with white chunks of fish in a sauce made rich with cream and eggs and wine and blanketed with cheese and baked to a sort of perfection that I, as a cook, would be thrilled to achieve just once in my life and yet, which was served at Angelo's day in and day out for decades as if it were a grilled cheese sandwich or a hamburger or a side order of green beans.
And if you were feeling under the weather, there was always Margarette's chicken avogolemano soup which was healing in every sort of way imaginable.
And for dessert- her rice pudding which I have tried a thousand times to replicate and simply cannot.

Angelo's was the restaurant where a server once took a look at me coming out of the lady's room when I was hugely pregnant with Lily, wearing an almost pop-art black and white dress, and said, "Mrs. Moon, you have eaten entirely too much."
Thirty-something years later and I am still laughing.

And so. Back to lunch today. Jessie and I went to Sahara's and the special was baked chicken with rice and I ordered that with my side of a Greek salad and Jessie got the stuffed grape leaves with pita and hummus and her side of Greek salad and we shared and it was delicious. 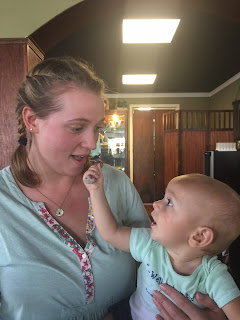 But I tell you- the baked chicken, even with it's lemon and oregano spiced skin couldn't begin to compare with Angelo's baked chicken which was presented as a tiny half of a bird, so small and tender that I used to accuse him of actually baking the pigeons that took up residence on the roof of his building instead of actual chickens.
We gave August a leg bone and he loved it and he shared it with his mama.
And the salad had feta on it but not one olive, not one peperoncini. Still, the dressing was pleasingly vinegary and the slice of tomato was perfect and the white ring of onion was sweet.
I am not complaining and I'm not even really comparing.
This is just the way it is.

But oh, what I wouldn't give to go back one more time to eat a lunch with Sue at Angelo's. I would get the snapper flakes and she would get the shrimp and we would drink our iced tea and cackle over our salads with the Greek trim, always served with an assortment of crackers. Maybe our server would be Glenn from the Virgin Islands with his dark, dark face and his white, white smile, his deceptively slow, deliberately artful way, or maybe we would have Ena who tall and regal and who was from Sweden, bringing our salads and bread. We would be surrounded by lawyers and politicians eating their own businessman's luncheons, all of us wiping our chins with the blue cloth napkins as we sat in the blue upholstered seats.
Who knows how much of Florida law got written in Angelo's?
I do not know. But I am sure that some of it did.
And that deals got done which affect me and my family to this day, most likely.

Well. There you go. That's what I'm thinking about tonight. How food is life and how our nostalgia for the food we loved which was good and which nourished us at some important part of our life will be with us forever.

Angelo may not have been the most personable of people. He may not have given his smiles freely or glad-handed his customers glibly but he provided a place where we could all come- hippies and musicians and politicians and governors and law-office employees and yes, thirteen-year old Girl Scouts- and be fed and treated equally.
And his wife took care of all the rest and the flowers she grew at home always graced the cashier's desk and I remember burying my nose in her gardenias, I remember how I always felt loved when I ate there.

And it was good. And I miss it.

It was a million years ago and if I close my eyes and blink, it was right this second.

I swear to you.