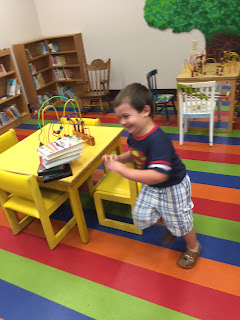 Yesterday was insane and a bit blurry, like that picture which I love, despite the blurriness. I took it in the kid reading room at the library where Gibson was not reading, as you can see, but was racing around that table at full super-speed.

Gibson is a hoot. While we were at lunch he asked me what color my hair is.
"Brown and gray," I told him.
"Gray's not a color," he said.
"Yes it is. Gray's a color."
"What shape is gray?" he asked.
"Shape? Colors don't come in shapes," I told him with the confidence born of being an adult.
"Yes they do," he said.
"What shape is red?" I asked him.
"Heart," he said immediately.

Later on, when we were at the library, we went into the Friendship Shop which is the little area where they sell books and things. The lady who seems to volunteer there (I think she's a volunteer) is absolutely beautiful. She seems ageless and has an accent not native to this country but it's beautiful and she is animated with a spark that has a lot to do with her beauty, her agelessness. She was kneeling on the floor looking for something when Gibson went up to her and tapped her on the knee.
"Yes?" she asked him, giving him her full attention, as she would for an adult.
"Can I ring that bell?" he asked, pointing to the little service bell on the desk.
"Yes!" she said. "Hit it hard!"
"Will you stand there?" he asked, pointing again to the desk.
"Of course," she said. She got up and went behind her desk.
"Will you go down behind the desk?" he asked.
By now, Lily and I were suffering from a bit of embarrassment. He was being a bit...bossy? Impolite? Rude?
But the lady took all of this in stride, and she was beaming with pleasure.
"Of course!" she said again, and she ducked down behind the desk.
Gibson, with great solemnity, hit the bell, twice, making it ring loud and clear and she popped up and said, "Can I help you?"
Oh. He was so delighted! And the lady seemed to be delighted too.
"You are so darling! Please come visit me again soon!" she said. "You have made my day!"
Lily told Gibson to thank her for playing with him and he did and we left the library on a stream of the lady's sweet silvery laughter.

And that was a good part of the day, for sure, although I felt jangly and weird all day long. I found a newish book about the Rolling Stones at the library which I checked out. Of course. "The Sun and the Moon and The Rolling Stones" written by Rich Cohen, a journalist who covered them on a tour in 1994. A film made about their tour in Latin America last year is being premiered at the Toronto Film Festival on Friday. It's strange how fascinating the Stones still are to people. I mean, it's not just me. Obviously. But I am certainly glad to partake of the results of the fascinations.
And of course I can't wait to see the movie.

But that's not what I was talking about which was how weird yesterday was, this sadness which overtook me probably because my man was leaving and it got weirder as he realized that the case he'd bought to take his hunting bow in with him did not fit the bow and he'd ordered it specially because it fit the airlines' criteria for safe hunting bow regulations and so, at the last minute last night he had to run back to Tallahassee where he did indeed find another case that fit but it had no key for the lock and so he had to go buy a chain and a lock and then he spent the rest of the evening packing everything, everything, everything except for me, I do believe.

I didn't sleep well because I knew he was getting up at four something to get to Jason's house because Jason was going to take him to the airport for his 7:30 flight. Jason had to be at work at six or something crazy like that anyway.

We had discussed this drop-off and pick-up at lunch and I flat-out told him that I wasn't going to take him to the airport at five-thirty in the morning and I probably wasn't going to be picking him up when he returns at 11:00 at night either and then I felt terribly guilty.
I asked Lily later if that made me the worst wife in the world.
"Mom," she said. "There are women who cut off their husband's penises and then kill them, so no."
"Thanks for perspective," I said.
"Anytime," she answered.

So it was a day like that and a night of little sleep and I did get up to tell him good-bye when he left. He must have been carrying at last four hundred pounds of stuff with him and I was scared he'd have a heart-attack just getting those bags into his car before the whole trip even began but he didn't and he texted me that he got exit-row seats for his entire flight and that's wonderful. He really is a giant, this man and sitting in a regular airplane seat for any amount of time is simply excruciating for him.
But after he left I got back in bed and read for a little while and then turned the light out and went back to sleep and when I woke up, the house was empty but for me and so it will be for almost two weeks.

And so what am I doing for the time he will be gone?
I am not sure.
Today I need to go back to town to get a few things that I didn't have time to get yesterday and I am doing laundry and so very little is different so far. Tomorrow I am getting my three new chicks and also the guy from the telephone company is coming to fix the line problem which is vexing my internet. These are not big things and my life is not made of big things. Right this second, I am content to sit on my back porch with the fan on me, watching the way the shadows and light change and play in the back yard, the way one elephant ear is tossing itself over and over in the breeze, the way the birds come and go, flying from feeder to branch and back again. It's so quiet and still that sound of one dropping magnolia leaf gets my attention.
I am pondering.
What shape is gray? What shape is green or yellow or blue?

The first firespike is blooming. Can red be the shape of the firespike bloom as well as a heart?

I need to ask Gibson who knows these things.