Mr. Moon is safely to his destination and I am now realizing that so much of my anxiety before he leaves is because I worry that I can't take the sort of care of him which I feel I must take when he is so far away but when he finally leaves I just have to let it go, trust in his strength (which is mighty) and his abilities and let him have his fun and know that he and I both will be perfectly okay.

I got a text from him a little after noon which said, "Made it to Toronto and have a 2 hour layover. It's time to eat. I am feeling loved, fortunate, and blessed. You and our family is what I have always wanted. We are a strong tribe. My love to all."

This is why I love this man. He is simply good.

So it's been a fine day. I went to the grocery store where I ran into an old friend who told me a horrifying tale of his hurricane experience- his wife had a heart attack DURING THE STORM and he could not take her to the hospital nor could EMS get to their house because of the wind and rain and falling trees. He gave her aspirin and kept her still and before it even started getting light the next morning, he loaded her and a chain saw in the truck and cut and hacked his way out to the hospital where they were the first patients through the door after the storm had passed.
She is fine. She is just fine.
But. Can you imagine?
I am so grateful for them that all is now well and that is wife is well on the road to recovery. Life is so tenuous.

I went to Costco and got a few things for me and for Lily and met her at the bus stop to give her what I'd bought for her and then came on home and actually cleaned out my refrigerator. What a glorious feeling to take jars of turned-to-sugar jellies and throw them away along with crap I know we'll never eat. I took the resulting trash to the garbage place and cleaned up the kitchen and finished the laundry and then the guy came to fix my internet.
I was his favorite customer of the day. 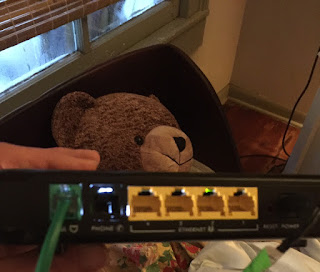 First thing he did was to check the router where he discovered that I had the phone line plugged into the wrong port. I had plugged it into the port marked "phone" when obviously, green should have gone into the green port, which is clearly labeled DSL.
Haha!
That took about one second but he spent some time telling me about the horrors of what it had been like for him and his coworkers after the storm. One has no idea of what all goes into the functioning of phone and internet lines!
Well. Now I have a bit more of an idea.
I told him that I was sorry I was such an idiot but that I'm old and so I simply admit that I'm an idiot and am not too worried about it. He reassured me that no, he sees plenty of things that make me look like not such an idiot and that was gracious and kind of him.

And oh! When I got home from the store, I noticed that my kitchen door was shut, which is most unusual. It's a spring-loaded door and we almost never close it and I knew that when I left, it was wide open as always. I gingerly opened it and checked to see if things looked to be normal and they did, but then I noticed that on the floor of the hallway there was a very dead, very young squirrel.
Oh Maurice.
I suppose there was a battle in which the door got sprung shut.
I know she was bringing me a gift. Besides the mortal chest wound there were no marks whatsoever on the poor creature. Does she know that my man has gone and does she feel the need to provide for me in his absence?

But whatever, I feel amply provided for and have a little pot on the stove with what HAS to be the last of the zipper cream peas and green beans along with onions and brown rice and have I a chicken pot pie in the freezer and all is well and I am content and happy and relaxed and tomorrow I'm getting my three new baby chickens. I have books to read and magazines, too.

My husband is happy and safe and he will be coming home eventually and if history tells me anything, it's that after two weeks of hunting in Canada, he'll be mighty glad to be back in the arms of his tribe and in his own bed.