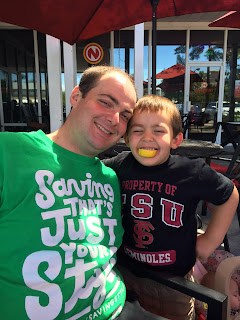 As you can see, today had some very, very terrific moments in it. Jason got to join us for lunch and so did Michael. 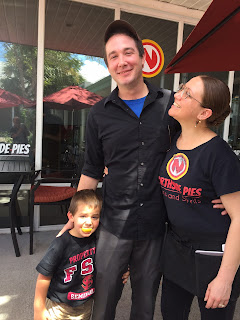 Gibson was digging the lemon smile. I love how he posed, wrapping his arm around Michael's leg. That gorgeous couple! They are still newlyweds, you know.
May they be so forever.
I was SO glad to see May. She works too much and is too much like her mama in that when she doesn't HAVE to be somewhere (work), she wants to be at home.
I completely understand. And relate. 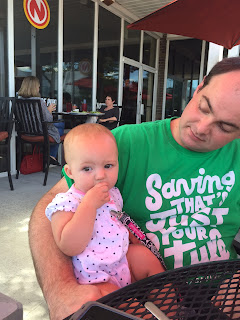 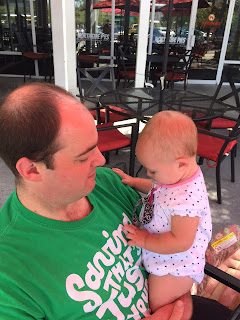 Can I tell you how much I respect and love Jason Hartmann? This man. Dang. He's just the best daddy that Owen and Gibson and Maggie could ever have. He's so comfortable with all aspects of parenting. Quite frankly, I've never seen a man who can take over the child-and-baby care the way he does when Lily's at work. And he's so responsible. I know I mentioned it, but I'd like to reiterate that on the morning following Hermine, when the wind was still blowing, when lines were down and roads were blocked, that man made it to work at six a.m. All of the Publixes had huge generators and didn't miss a beat in serving their customers. And Jason was right there.
And as a husband, he is respectful and loving and well, he's just everything you'd want in a son-in-law. Plus, he is funny.
I am blessed in sons-in-law. I truly am. And I know it.

So we had a very nice lunch and then I went and bought a pattern and some pretty flannel to make Maggie a winter outfit and also, some very soft wool that I'd like to make her a little lightweight blanket out of. We shall see.

Joanne's Fabrics was hopping, as it generally is. There were two women buying up all of the pink tulle in the store to decorate for a wedding. Seventy-something yards of it and and I am not shitting you. The ladies told me that they were using it to decorate a pergola which had been built in a cow field where the wedding was to be held. There was also an old man there with his wife who annoyed the snot out of me. He was one of those old guys who think they are hysterical and he kept cracking these stupid jokes in a voice directed to everyone in the vicinity that weren't in the least bit funny and if I had been his wife, I'd have killed him long ago. I'm sure he thought he was doing a store-full of women a favor with his grand and clever bon mots but it was just painful. Most of the women just ignored him which of course only drove him to try harder. He was also one of those old geezers who like to tell you how incredibly old they are. "Well, past my three-score and ten," he announced. "So I won't be around much longer."
Were we all supposed to tell him that no, he didn't look that old and that he'd be around forever?
No one did. His wife was probably thinking, your lips to god's ear.
And I kept thinking, Oh please god, don't let my husband become one of those men.
I'm serious. I've seen Orange Is The New Black and prison is not kind to elderly women.
Okay. I'm being mean and maybe he has dementia but whatever, I'd have left him in the car if I'd been his wife.

Got home just before four o'clock because the 8 a.m. robocall had told me that the repair person from Turners Fine Furniture would be here between four and six. However, I found the repairman in his van and when I apologized for not being here upon his arrival and asked him how long he'd been waiting he said, "Oh, about an hour and a half. I tried to call you but no one answered."
He only had my landline number.
Which is, you know- in my house?
Turns out he was serious. He really HAD been here for an hour and a half but he didn't mind. He just sat in the van and watched the chickens and the squirrels and it was peaceful. At least that's what he said.
He was a character.
He fell in love with my house. Just flat fell in love with it. He lives in Tifton, Georgia way out in the country and if the government comes after him, well, he knows those woods and he can disappear.
This was an actual part of our conversation.
Yes, somehow, I really liked the guy and by the time we got to discussing the election and he dissed Hilary, I felt quite comfortable in raising up my hand like a traffic cop and saying, "Whoa now! Hilary's my girl!"
And we talked gun rights and it turns out that he believes that background checks should be more thorough and I told him that that's what I think too and that I'm sure that's what Hilary thinks as well and he listened to me and at one point I said, "You know, I think we've made a connection here and I just want to tell you that Hillary is extremely qualified to be the president and Donald Trump is not," and I told him a few things about Trump that he didn't know (how is this even possible?) and he listened to me and said, "I had no idea!"
So it was an interesting meeting with Eddy, the repairman, and on some level, I really do feel like we DID make a connection and although I know he's not going to vote for Hillary, I'm pretty sure he's not going to vote at all which is better than voting for Donald, I guess, and we parted on very friendly terms and he talked to my chickens like he was one of them and they perked up and listened to whatever it was he said. And who knows? Maybe he'll go home and look some of this stuff up if he does indeed have the internet out there in the woods in Georgia. Although he'll probably just go home and watch Fox News.

And I'm just in a good mood and looking forward to doing some knitting and then getting in my bed and reading some more "Arcadia" and I read a beautiful, beautiful article online about Larry McMurtry which made me want to go back and re-read and in some cases, re-re-read some of the books he's written. What an amazing mind he has, what an amazing life he's led, and I'm so glad to hear that he's working on one, maybe two novels, as we speak.

Writers write. That is what they do.
Writers write and your kids can grow up and marry amazing people and kids are beautiful and babies are too.
You can meet someone you would never imagine you have one damn thing in common with and yet, find a connection which allows you to communicate. You can listen and you can be listened to. Respect can be earned and respect can be given. McCall's still makes patterns and you can still buy them if you get past the fucking cinnamon stench of the fall decorations at Joanne's fabrics without passing out. Brides still and will probably always like pink tulle. Old men can be annoying as fuck.

I think I'm going to cook some pasta for my supper. I had a huge salad at lunch so my vegetable requirements have been met.

I have a good life. This may be the truest thing I know.