Yeah. Again...I Do Not Know 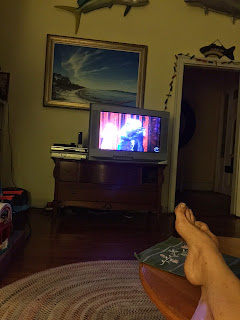 I stayed up until the ungodly hour of 11:35 last night to watch David Letterman because both Bill Murray and Bob Dylan were on, this being his next-to-the-last show.
I won't be bothering to stay up tonight.

It was fine. Bill was Bill and Bob was Bob and I doubt that ever the twain shall meet although who knows? I think I would have enjoyed myself more if I'd just gone to bed and read for an hour. Actually, Bob cracked me up more than Bill did. Letterman, in his introduction to Dylan's appearance called him "the greatest songwriter of modern times" and then of course Bob sang a tune made famous by Frank Sinatra, written by Matt Dennis and Tom Adair. Haha! I loved it. And it was a very appropriate song- "The Night We Called It A Day."

Anyway, sorry to see David Letterman go although I never stay up that late but it's always nice to know that if I wanted to, I could.
Well, Stephen Colbert will do fine, I'm sure.

On my walk this morning I saw this guy crossing the road from my neighbor's yard and headed in the direction of mine. 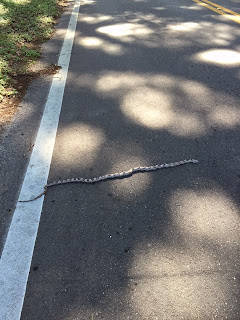 Another oak snake. I believe there's already a different one in the hen house because I found a duck egg, sort of sucked out and collapsed. We must be on some Oak Snake airbnb list or something.

And that's about all the news I have. I can hardly bear to even read the "real" news. Oil spreading over the California coast, droughts, earthquakes, ISIS, man's inhumanity to man and then of course, there are people like the mother in this link.

Go watch it and take a forty-second break from the crap and the snakes and the horrors and the heat and the eternal weirdness which is humanity.