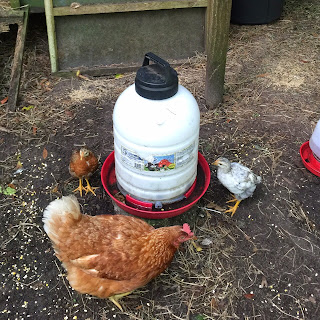 Remember when I said that Mother's Day this year was the BEST Mother's Day ever? That's because that was the day that Lily told us she was having another baby.
I had suspected it but had not yet brought up and then, she got me alone and said, "I have something to tell you," but before she could get all the words out of her mouth, I said, "You're pregnant!" and yes, that was the news and I was so thrilled for her and when I think of her baby and Jessie's baby being just a few months apart and being raised together...well. I couldn't be much happier.
She told me that she was a little afraid to tell her daddy. "He's so practical," she said.
"Oh, just go tell him," I told her and she did and he was thrilled too.
And then she told Hank and May, and Jessie already knew and it was such a fine thing, all of us hugging and smiling and getting a little weepy. Lily and Jason are so happy.
She and Jason waited to tell the boys until just a few days ago because she knew that Owen would tell everyone and so he has. He can't imagine anything better than a new baby brother or sister. He says that if it is a girl, her name shall be "Magnolia" and if it is a boy, his name shall be "Oliver."
All will be revealed eventually.

And so it goes, the number of grandchildren I have will be doubled by the beginning of next year.
I can hardly believe it.

And in the meantime, we go on about our business, don't we?

The baby chicks are getting bigger every day and perhaps on Friday I shall let them out of the coop. I have to go to town both today and tomorrow and I want to be here when they are out, to keep an eye and an ear on them. Today I am going to town to stay with the boys for a little while and tomorrow is Owen's preschool graduation, after which we are invited to go to Chuck E Cheese. I have staunchly refused to go to that evil place for decades and have told Owen that I will not ever be going there with him.
"Yes," he says calmly, "you will."
We shall see about that, too.

Pictures from the yard and my walk. 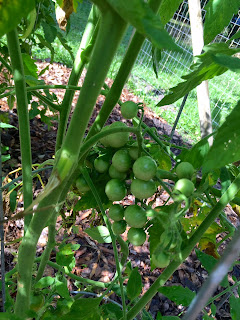 Can you peek into the darkness there and see all of those baby cherry tomatoes? 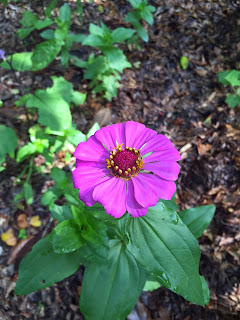 The first zinnia bloom. I have actually planted an entire row of zinnias this year but that one is a volunteer, seeded from last year's crop. Which were all volunteers. 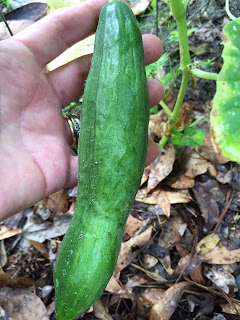 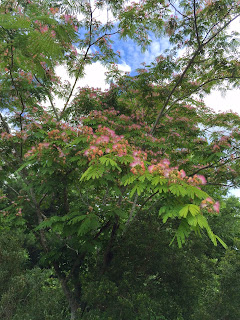 A blooming mimosa tree along my walk route. It is alive with bees and fragrance.

It is truly growing hot now. The beauty berries are starting to form, the blackberries are ripening. The magnolias continue to bloom and perfume the air. Summer is here in all but name. And soon...babies will be coming.