Sometimes I Feel Like I Have The Whole World, In My Hand

Let me just say that ducks don't seem to have a very long memory. Or maybe they do but they are the most cosmic of all creatures who choose to "be here now" and get on with the realities of life.
Whatever, Miss Lilly the duck seems to be going about her life unperturbed although what do I know? She is giving me an egg each day so at least that part of her life remains steady.

I just saw a hen jump over a squirrel.
I am not making this up.

Oh. And Mick just had sex with Miss Trixie. 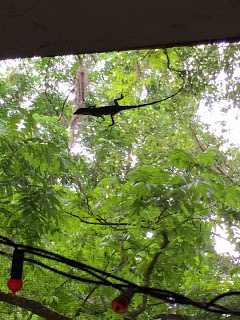 This anole just stalked and snapped up a little bug on the screen.

Man, there's a lot going on here this morning at the Church of the Batshit Crazy if you actually look beyond the bucolic peacefulness of all of it.

The baby chicks are getting their feathers for sure now and starting to grow little combs. They can flap and flutter their way up to perch on things in the coop. I just went out to try and take a picture of them but they are as wild as their mama and run from me although almost every time they see me, tasty treats seem to magically appear. A perfect illustration of how a parent's unreasonable paranoia can be transferred to her children.
Well, she is a very good and fierce mother. 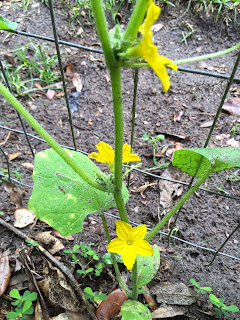 The cucumbers are starting to bloom. 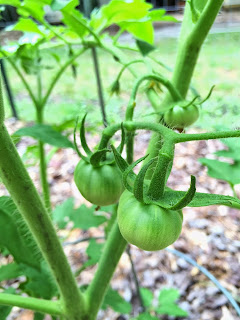 We are going to be eating cherry tomatoes soon. 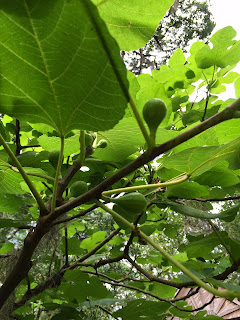 The fig tree has more baby figs in it than I've ever seen. Will we get one ripe fig this year? Stay tuned. It would be so fine if we got a few. Enough for a couple of pints of preserves. I say this every year, don't I? 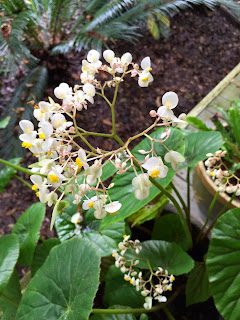 My giant-leafed begonia has its sprays of blossoms, delicate as tiny orchids. 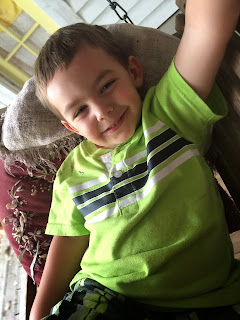 Gibson on the porch swing beside me. We were swinging up a storm, trying to keep the mosquitoes off of him. I killed one on his forehead and said, "Sorry, baby. I was smashing a mosquito."
"Thank you!" he said.
Owen, however, was upset. He's currently going through a thing where ALL of nature is sacred and should not be killed. His Buddhist phase, perhaps.
"Don't kill nature!" he said.
"I'm sorry," I told him, "but if nature is sucking your brother's blood out, I am going to kill it. Mosquitoes are in no danger of extinction."

And then he proceeded to ask me about a whole lot of other animals which he worried MIGHT be in danger of extinction. Tigers and hippos and crocodiles and panda bears.
Sadly almost every animal he mention is endangered.
"Pterodactyls?" he asked.
"No. They're already extinct."
"But what about in the future? Will they be endangered then?"
"I'm not sure how that would work, darling."
"In my mind, they will be," he said. "Can it work like that? In the future, in my mind?"
"Maybe," I told him. And then I proceeded to tell him all about how he can create anything in his mind and that he can learn to write it all down, entire worlds he can create and that other people can read about the worlds he creates in books. If he wants to.
He got a dreamy look on his face.
"Television shows!" he said.

I'm going to go put on my overalls and get out in the garden for awhile.
Nature.