A Correction, Plus: Life Is But A Dream

You know, I have lived in this house for eleven years now and the sound of the train still shocks me. It is loud. Especially the whistle. Horn? Whatever that blasting blat of business is. I know they have to do it. I live just a few hundred feet from the crossing. So I get it. But I swear that sometimes, it still makes me jump. Sometimes just the sound of the approaching power of it makes me wonder what in hell is going on. Are we under nuclear attack? And Gibson still runs to me and says, "I need you!" and falls into my arms when he hears it but I think by now it's a game and nothing more. An excuse to cuddle and I'll take that any day of the week.

Next order of business. I hate to pass on inaccurate information so let me make a correction here right now.
ANTS IN YOUR PANTS DO NOT MAKE YOU WANT TO DANCE!
Okay? However, I do stick to my statement, better ants in your plants than ants in your pants.
That is very true.
I learned this today the hard way. While distributing a bag of mulch leaves under the cucumbers I had just weeded, I realized about halfway through the bag that I did indeed have ants in my pants and the first one to bite me was up almost to the underpants boundary and then I looked down at my arms which were beginning to sting like fire to see that yes, I had those big ol' honkin' red ants on me, the sort that when they sting you, curl up into little commas of death to deliver their toxin which makes them even harder to brush off as they are ATTACHED, BABY!
Attached like an opportunistic twenty-year old to a ninety-year old billionaire with dementia.
I hope that didn't offend anyone's sensibilities here. But you know what I mean.

I ended up having to come in the house and strip off my pants and my socks and my shoes which were all crawling with the red demons, and change before I could go finish up my chores but I will live. And I got a lot of weeding and mulching done now and discovered that the green beans actually do have beans on them which was a very fine discovery indeed.

So that's pretty much what I've done today.

Here. I tried to take some pictures of the babies. 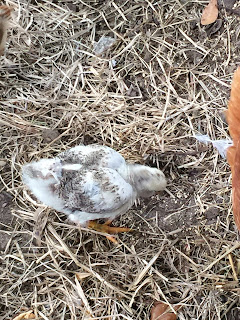 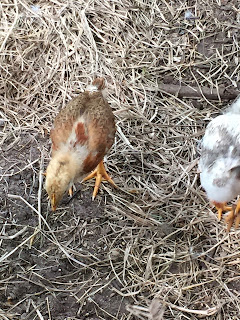 In looking at the pictures I noticed that little yellow chick seems to have far more tail-feather development than little white chick. This could be an optical illusion and even if it's not, it might be meaningless but it could mean, possibly, that yellow chick is a rooster and white chick is a hen.
We shall see.

I'm about to go cook some chicken spaghetti (I do eat a lot of chicken, don't I?) with peppers and onions and garlic and olives and whatever else I can find. Oh yeah, mushrooms. I haven't seen my husband all day long because he left the house before I got up, to go coach T-Ball and then went to paint at the duplex. I am looking forward to our reunion. I should probably feel guilty about being such a slouch of a grandmother and not getting up and going to the game myself but please- nine a.m.? Haha! That'll show Owen that he shouldn't be telling his grandfather that he could marry a younger woman.

I am still cracking up over that.
And I will point out that after his Boppy told him that he didn't want to marry a younger woman, he only wanted to be married to Mer Mer, Owen did offer to go to Las Vegas with him and hit the man I was going to marry over the head so that Boppy could marry me.
Which is all a bit confusing in that I am already married to Boppy but whatever.

Anyway, I better get in there and get to chopping and browning and stuff.

It's been a good day communing with nature and getting dirty and sweaty. The ants were a bit over the top as far as I'm concerned when it comes to natural encounters but what are you going to do?
We're going to have a few baby beans on our salad tonight and I'm already dreaming of the Salad Nicoise we'll be having soon with our own beans, tomatoes, eggs, and potatoes.

I am living the dream, even with the train in my back yard.