An Entire Universe, Right Here In My Back Yard

To no one's surprise, least of all my own, I slept until almost ten this morning.
By the time I got up, Mr. Moon had already gone to town to help Jessie and Vergil with their kitchen. Mr. Moon called me though and told me that if I went into his garage and looked over by the rakes and stuff, I'd find a surprise.
I knew what it had to be. I've been saying that Camellia is laying in that garage and I'd looked but I couldn't find her cache. 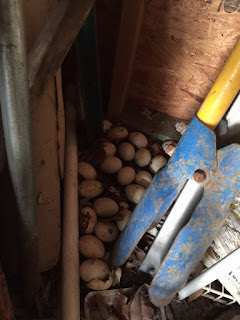 Well. There is is.

I picked up two dozen eggs. 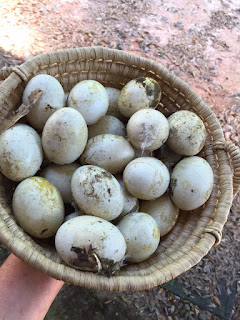 I don't even think I'm going to wash and do the float test on them. I believe I'm just going to heave them into the woods.
Jesus, Camellia! Reminds me of the cat I had once who gave birth IN A BUCKET OF NAILS! Animals are not always as full of wisdom as we'd like to think.

Last night Jessie and Vergil took a little walk out to the giant oak where Vergil had asked Jessie to marry him. It's the same oak that let go part of itself a few years ago. I was sitting right here on the back porch when it happened and I heard a ripping as if part of the universe was coming unglued and then an endless pause and then a tearing, a sheering, and the ground shook when the huge part of the tree hit the earth and it reached all the way across the back yard. Anyway, the tree has lived on, still magnificent, and as Jessie and Vergil discovered last night, is now the home to a very busy hive of bees. 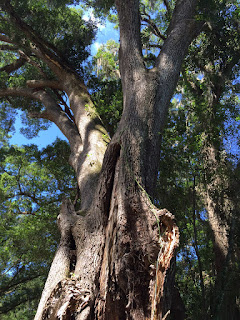 You can't see the bees in the picture but they are darting and in out of that slit in the middle. Is that tree now filled with honey? With an entire universe of working bees? I hope so.

I heard the baby chicks making their call just now and went out to check. Mama Hen was pecking and scratching a few feet from the hen house, no babies around her. The sound was coming from inside the hen house and I found this. 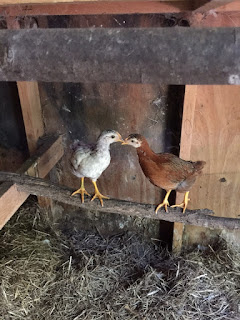 I believe that she's trying to teach them to stay in one place without her for a few moments. Now I can see her leading them back over to the ivy. She is a good mother. She is teaching them what they need to know to take care of themselves. Sometimes animals ARE full of wisdom. And could there be a sweeter picture of the two chicks? I swear, they finally posed.

So hello and good morning and I believe I am going to go put on my overalls and get dirty. I feel good in spirits and in body and although my dreams were strange as ever, they were a bit spicy (in a good way) as well. One of the chickens has now laid an egg and she and another hen are cackling and cackling about it, the air is humming with crickets, the light is dancing across the yard and it is a most beautiful day and I am most grateful to be alive in it.