The Potato Harvest Is In! We Shall Not Starve! 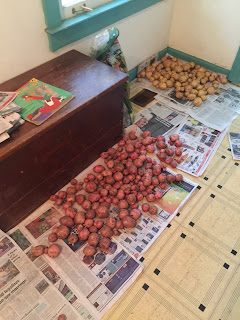 Mr. Moon dug the potatoes this morning and then washed them and we've set them in the mud room to dry before we store them for use. That's a lot of potatoes! He was soaked through with sweat and filthy by the time that job was finished. He is my hero!
Think of all the lovely green beans and potatoes we shall be eating! Oh my goodness. This seems to be one of those rare years when the temperatures and rainfall have conspired so that things actually grow in the garden. I know. I speak too soon. We're not even into summer yet, but so far, it's been just beautiful.
I pulled the rest of the kale and gave it to the goats next door along with the pea vines. I am sad to see both of those go but there will be more next winter and spring. If I were worth my salt, I would be out there right now, doing some more weeding and then raking up leaves to mulch where things have been pulled. I will do that. Just not today. I am tired. I want to plant another row of purple hull peas and I also want to plant a few watermelons and cantaloupe. It may already be too late but so what? We're out three bucks for the seeds if it is and if it's not- glory!

Here's something that's not a glory. We have tiny little black sugar ants everywhere. EVERYWHERE! They are on this table as I write and for all I know, my computer is filled with them. They get on us and sting. They climb the walls in columns, come out of drains, get into every sort of food item they can. Sometimes they swarm the cat's bowl. They are a painful nuisance. I have a spray which works quite well and it claims to be "safe to use around pets and children," which always makes me wonder if there's not a tiny disclaimer somewhere which says, "unless you don't want them poisoned." The smell of it is strong as hell and is exactly like lineament. I do not love having a home which reeks of Ben Gay. But it beats having the damn little ants everywhere. Mr. Moon feels as if he is back in the gymnasium and locker room when I use the spray. So he's cool with it. I am fairly insect tolerant but ants and roaches can truly get out of control. I saw a roach in the kitchen a few weeks ago that was so fucking big I doubt he could have fit into the door of the Roach Motel. Did I already tell you this?
Anyway. True story.
The yellow flies are biting now too. They look like this: 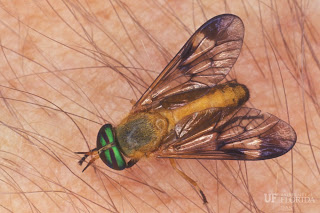 They are fierce biters and you don't know one's on you until you feel the excruciating pain. Those motherfuckers draw blood when they bite and the bite location itches for at least hours. And I don't mean itch like a mosquito bite. I mean itch like HELL and the site puffs up and gets red and they're just evil. Although, as I just discovered through vast research on the internet, it is only the females who bite (not unlike mosquitoes) and the males just go about their business which is pollination. And they are hard to kill. Kathleen, who was an entomologist, told me that when they take off from your arm or leg, they fly forward, and not straight up. Since I learned this, I have been better at slapping the shit out of them but it's still not easy. However, when I do manage to score a good kill, I am thrilled.
No Buddhist am I.

Well, that's enough of that although I haven't even touched upon horseflies and ground wasps and regular wasps and mosquitoes and no-see-ums yet. The no-see-ums may be the worst of them all because they are so tiny (hence, their name) and can attack with such ferocity and in such numbers that you will be driven insane within seconds. They especially love to feed on us at sunset near the water. Screens cannot deter them.
Look- I've said it before and I will say it again- the people who settled Florida, whether Native, white, African or whatever, were the bravest, most rugged and tough people who have ever lived.
You see these women? 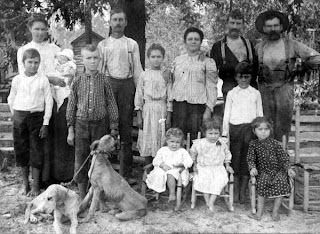 They did everything I do and their potato harvest wasn't a fucking joke. Making a crop was life or death. They slopped hogs, ground corn which they grew themselves, hauled water, cooked on wood, had no refrigeration or ice, made their own soap and everything else they used, sewed their own clothes, birthed their own babies, educated their own children, peed and pooped in an outhouse (if they were lucky), made quilts in their spare (!) time, and canned and pickled everything they could grow. They battled panthers and snakes and bears, had to tolerate all the insects I mentioned plus just plain old flies, went through menopause without hormones or fans or air-conditioning, and doctored their families through every horrible malady known to mankind with no antibiotics or pain relievers. Their chicken flocks weren't a hobby. If something got into their coop and killed their hens, it was a tragedy, not a mere sadness. Oh- and what about hurricanes?

How about this woman? 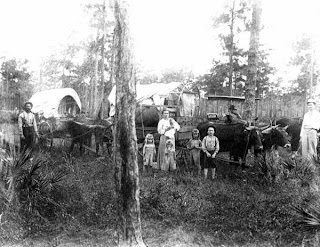 You think maybe her life was difficult?

I'm sure the men suffered too but I can't help but think that the women took on more than their share of the burden.

Compared to these women, I am naught but a pretender. I couldn't have made it a month in the conditions the women who lived in this house back in the 1800's suffered. Not in summer, not in winter. Not even in spring or summer. And especially not wearing those clothes. Jesus Christ.

I can't even begin to imagine the lives of Black women or Seminole women in this state. 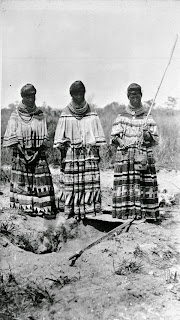 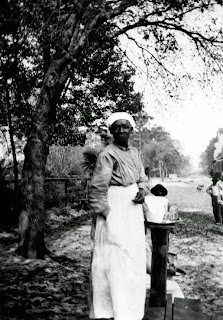 So yeah. I have itchy legs from ant and yellow fly bites. But I can go into the kitchen and get a nice cool glass of ice water and cook my supper on a sweet little gas stove and oh, sure, I am going to sleep tonight in my line-dried sheets but I washed them in a machine with store-bought detergent and they are tucked onto and into my Therapedic™mattress, not one I made myself out of either corn shucks or spanish moss. And the air conditioning will be set at whatever I desire. And if my bites are still itching, I can take a Benadryl which I buy generically for a song.

Here's something those Florida women of old and I share. 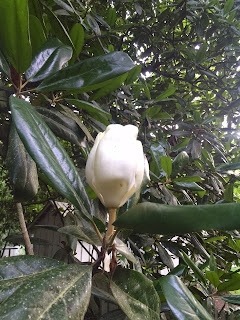 A magnolia blossom, still in the cup stage. It's on the tree right behind my porch and one of those Florida women of long ago probably planted that tree.

If any of this is interesting to you, I would advise you to go to your library and check out some books by Marjorie Kinnan Rawlings. The rivers and woods and prairies and people of Florida were her blood and she was an amazing writer. Also,  "Their Eyes Were Watching God" by Nora Zeale Hurston.

And to sum it all up, my darling Lis's song about Florida. I've posted this before but I'm posting it again.

I'm not talking about Disney.

Time to go herd the chickens.